The Yankees came to town for a big 4-game series against the Orioles, with the two teams a game apart for the division lead.  As it so happened, Pinky wanted to see a game with her brother and his girlfriend and there are only two weekend series left in the season.  So that brought us down to Camden Yards today for the last of the Yankee games.

It’s weird this year… the Orioles are actually in a September playoff race.  That has not happened since I’ve lived in Baltimore.  And to make things juicier, it’s the Yankees and Orioles that were tied for the division lead at the beginning of the series.  It’s always a big game when the Yankees are here because their fans show up like they were Steeler fans.  Over the last 15 years, they consistently out-yell the home team fans.

When I was trolling for tickets earlier this week, I could see that things were going to be different.  The Saturday game was almost completely sold out… the only seats left were in the top rows of the upper deck (which did sell out later.)  So we opted for the Sunday afternoon series closer.

This is neither here nor there, but I totally forgot that it was also the first day of Sunday NFL football.  Lucky for me, the Steelers don’t play until tonight.

Anyway, when I checked online, I could see a whole section open, in the left field corner.  I had my eyes on the 2nd row.  I walked down to the ticket office at lunch on Wednesday, so I could avoid the customary price and fee gouging from Ticketmaster.

When I got there, the ticket guy said the 2nd row had been sold, so I asked for the 3rd row.  He said it was open, but then as he was putting in our order, he went, “Oops, the 3rd row just got sold.”  So we took the 4th row, which really isn’t so bad.

I’m not going to go into a big spiel about the game.  There wasn’t much to say… the Orioles got their asses handed to them, 13-3, so they split the series and remain tied for the division lead.  There were a lot of Yankees fans, but when they started their chants, the home team fans booed them down.  Attendance was just over 43,300, which is just a little under a sellout.  And Pinky only stood up and accidentally cheered the Yankees one time.

To me, the best part was that they have almost all of the Hall of Fame statues set up… they just unveiled the Cal Ripken statue last week, so only Brooks Robinson is left.  Obviously, I took pictures. 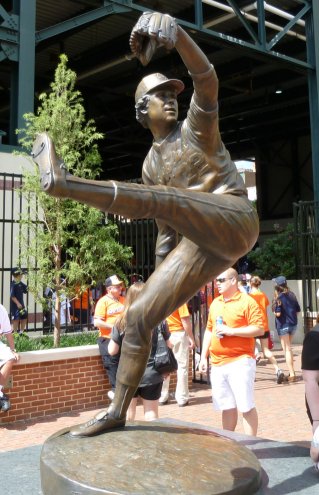 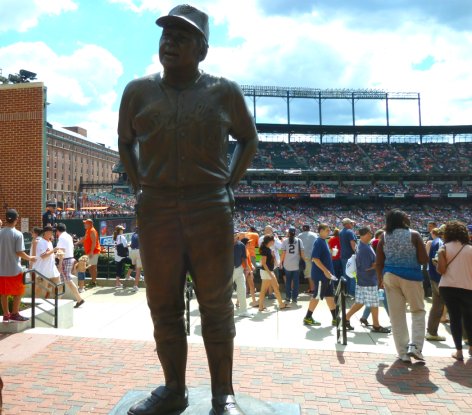 Earl looks like he’s about to question some umpire’s legitimacy and lineage. 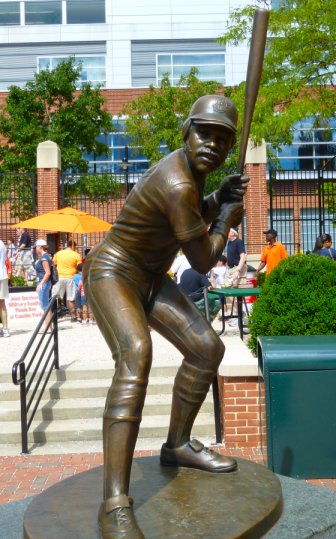 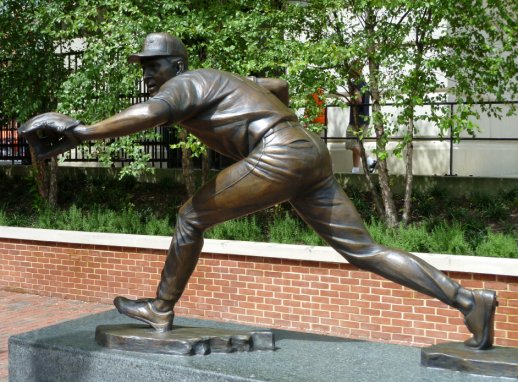 Shortstop and third baseman, Cal Ripken, aka: The Iron Man

I guess this really IS the “Iron Man.”  This is my favorite of the statues so far.  It’s a great action pose. 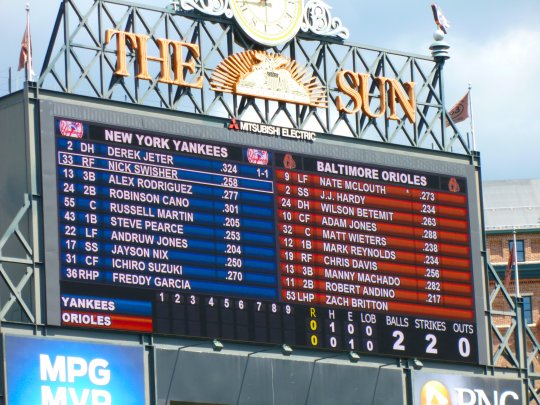 I don’t know why I never thought of it before, but I really should start shooting a picture of the lineup.  It’s an easy way to document the occasions when I’m seeing the big time players.  Looking at the Yankees lineup, you know that Jeter, A-Rod and Ichiro will be Hall of Famers. 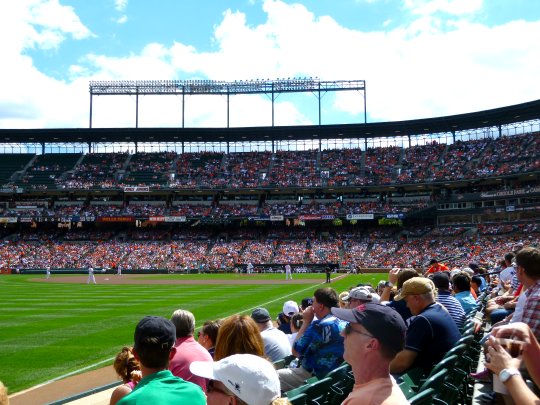 This was the view from our seats.  It’s a long way from home plate.  Unfortunately, no one hit anything to the left field corner.

I only had a couple of annoyances to deal with today.  One was the jabbering five-year-old, whose mouth was about a foot behind my right ear.  Luckily, he wasn’t there for the whole game.  More bothersome was the lady across the aisle from me who was so fat; she couldn’t fit all the way into her chair.  She spent most of the game sitting on the edge of her seat (not out of excitement… she was playing with her phone).  And when she was positioned like that, it put her head directly between my head and home plate.  So I spent a lot of time bobbing back and forth, to counter her movements.

Why people spend $50 on game tickets and then spend the entire time fiddling with their phone is beyond me. 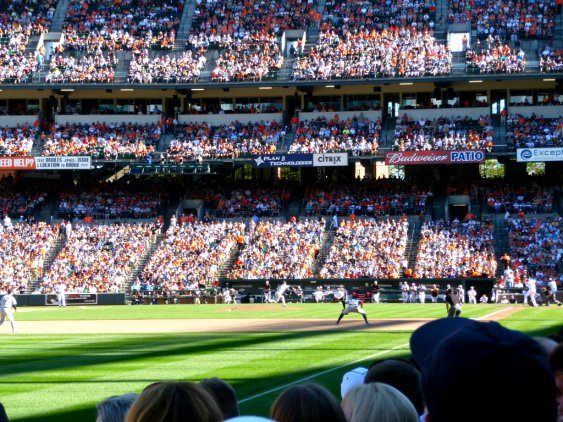 I love this shot of the creeping shadows.  It just screams, “fall baseball.”  And even better, it meant we were now sitting in the shade.

OK, out with the baseball for the day, now it’s time for some football…  By the way, I'll be "live-Tweeting" the game so if you want to play too, follow me at @DarwinfishBluz.
Posted by bluzdude at 7:42 PM