I want to take a quick break, amid my long, rambly tale of retail life, to off-load some of the bits of crappola that have been building up over the last two weeks.  I’ll jump back into the story on Tuesday night.

The Google Monster
WTF is up with The Google?  Is it just me?  Wednesday morning, about 11:45, as if a switch had just been flipped, I suddenly started getting Google hits out the wazoo.  Most of it came from searches for pictures of the Hilton Camden Yards… I got over 165 hits on Wednesday and Thursday.  (I did my own search, but couldn’t figure out why there was such sudden interest.  But one of my shots was #5 on the list.)

But it wasn’t just that search; I was getting an unusually high number of Google search hits on all kinds of random stuff.  It was like all of a sudden they upped my Google status all over the web.  I don’t get how that happens.

While it’s good for my overall sense of blog well-being, I know they’re like empty calories.  I’m not getting quality visits from people that want to read my goofy shit, they’re just picture trollers.

The search that’s blowing up for me now is just plain weird.  The search string is, “Keep calm and bang Hermione.”  I trust that’s a play on the old English axiom to “Keep Calm and Carry On,” from WWII.  Now, before that earlier sentence, those words have never appeared on my blog.  But if you search under them, you come to a post where I mentioned that, sure I watch the Potter films because hey, Hermione’s hot.

Because it’s an image search, the image from that post is that “Demotivator” picture about the Twilight Moms, with the caption, “If they were middle aged men obsessing over a 17-year old girl, you’d call the police.”  Apparently it drew enough curiosity that people clicked on it.

Anyway, I’m always happy for the traffic and obviously I hope that people will notice and return to the blog as they’re copying the pictures, but based on my own picture-acquiring activities, I doubt it.

The New Giant Jesus
There are two subjects that, when news breaks about them, people send me the links.  One is bacon.  The other is the Solid Rock Church in Monroe Ohio, famous for displaying a 62-foot Half-Jesus statue along I-75, which was hit by lightning two years ago and burned to the ground.

This week, my alert brother-in-law sent me a link to the story on how they have put up a new replacement statue.  Giant Jesus Part 2 comes in at 50-feet, and this time it’s His whole body and He’s not chest-deep in water (which should have been biblically impossible.)  His hands are not raised overhead, so it can no longer be called “Touchdown Jesus.”  The statue has its arms out to the side in a welcoming gesture, and has thus been christened “Hug Me Jesus,” kind of like a “Tickle Me Elmo” for the evangelical set.

As the statue was going up, my BIL happened to be driving by and at the time, the head hadn’t been attached yet.  Unfortunately, he didn’t have the opportunity to get a picture.  Gah!  The comedic possibilities for The Great Headless Jesus would have been boundless.

If it were me that was driving by, I don’t know that I’d have been able to get a picture either.  I probably would have assumed that the sculptor got the specs wrong and mistakenly did a statue of John the Baptist.

Where’s the Shirt for “Silas the Syrian Assassin?”
In preparation for my birthday that comes up in about a week, I started laying in some birthday presents for myself.  And when left to my own devices, I usually end up with more Monty Python t-shirts.  Check out my new additions. 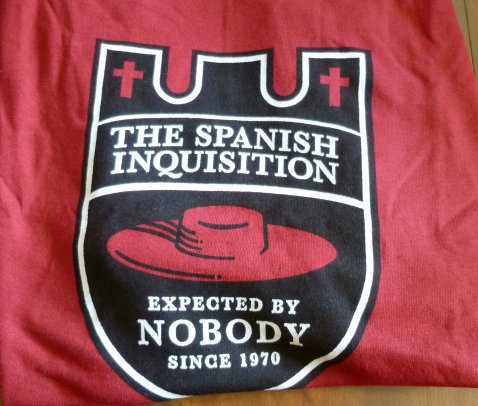 The Spanish Inquistion, from Think Geek.

“Nnnnnnnnnnnnoooobody expects the Spanish Inquistion…” I love this shirt completely. 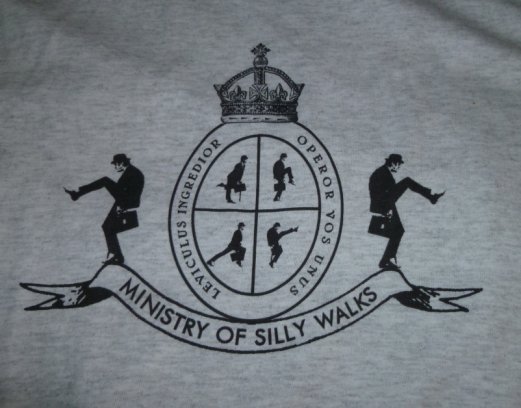 Emblem for the Ministry of Silly Walks, from Café Press.

This is from one of my favorite sketches, and a classic bit of physical comedy.  But are there any classical students that can translate the Latin around the perimeter?  I get that “leviculous” is probably the root for “levity” and is used to represent the “silly,” but what about the rest? 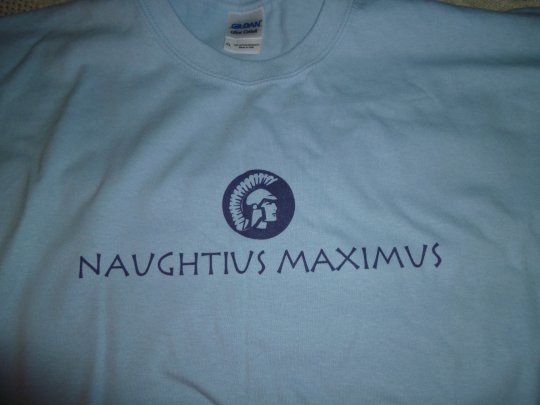 I’ve always loved joke names, and this bit from “Life of Brian” still kills me.  “Nautius Maximus” is the purported name of the father of Brian of Nazareth.  As Brian explains this to Pilate, it gives way to one of my favorite scenes in the movie, where the guards tell Pilate that it’s a joke name, like “Sillius Soddus” or “Biggus Dickus.”  When Pilate explains (with his Elmer Fudd speech impediment) that he has “a very gweat fwiend in Wome named Biggus Dickus,” the guards can’t help but bust out laughing, much to Pilate’s chagrin.

(Later in the movie, Biggus Dickus actually shows up, and he has a speech impediment too… he can’t say his “S’s."  It’s another great piece of physical comedy, which I’m not too proud to co-opt.)

Orioles Magic
As I watch the Pittsburgh Pirates dreams of a playoff run, or even a .500 season disappear like dignity on the Jerry Springer Show, I turn instead to my local ball club, the Baltimore Orioles, who are in a pennant chase with the hated New York Yankees.

Last week, Sitcom Kelly, her sister and I all got emails giving us the chance to register to buy playoff tickets.  With the O’s not having sniffed the playoffs since 1997, it would be crazy to have playoff games going on here without trying to see one or two.  The offer was that you could buy up to four tickets, which would accommodate the three of us, plus Sitcom Sister’s husband.  So I let them try to get the seats and I would reimburse for my ticket.

First, Sitcom Kelly bought tickets for “Baltimore Game 3” of the American League Divisional Series (the ALDS).  That means that A) Baltimore will have to be the higher seed, as to ensure home field advantage, AND B) the series would have to go a full 5 games.  I find that scenario highly unlikely to happen.  (Of course, if it DOES, these tickets will be gold.)

Then, her sister got tickets for the single Wild Card game, where the two teams with the best records, that didn’t win their division, play a single game to decide who plays the division winner with the best record, in the ALDS.  For that to occur, the O’s can’t win the division (they’re currently one game behind the Yanks) and they would have to be the first Wild Card team, so that the game is here.  With about 9 games to go, the whole thing is a tossup.

So I decided to get into the mix, and got a pair of tickets for the 1st and possible 2nd ALDS games in Baltimore.  In all cases, if the games aren’t played, everyone gets their money back.  Also, in all fairness to the sisters, they knew they would be out of town during the opening ALDS games, so they didn’t want to risk buying the tickets and not using them.  Personally, if the O’s get into the ALDS, I don’t think they’ll be the top seed, so it will be games 3 and (possibly) 4 that take place in Baltimore.  Confusing, much?

The only scenario where we’re closed out of seeing any games is if the O’s take the 2nd Wild Card position, so that it’s played “away,” and then lose the game.  Anyway, all will be known soon enough.

The Romulan Nation
It’s not going too well this week for the Rominator, is it?  That video leak really put him back on his heels.  It was Romney speaking to a room full of other filthy rich people, with disturbing things to say about the rest of us.  It reminded me of when someone is about to start talking about minorities and the first thing they do is take a look over both shoulders to make sure the coast is clear.

The GOP rebuttals to this mess are laughable.  My favorite is how they’re jumping on Obama over his “broken promise” to change Washington.  I mean, seriously?  How can the guy change Washington if the other side uses every option at their disposal, including sinking the country’s credit rating, to ensure that nothing changes?  And then to complain about how the other guy broke his promise?

Come on.  Nobody but Fox “News” can even take this seriously.  And speaking of, did you see Jon Stewart Wednesday night?  Holy Hell, he absolutely took Fox apart.  It was a thing of beauty, as brick by brick, he dismantled every argument their talking heads made while they were defending the Romney tape.  You have to see it to believe it.  And as a public service, you may see it right here.


In my opinion, this guy needs to be on at 6, every night.

Steelers Gameday
Maybe you’ve noticed, and maybe you haven’t, but I’ve bagged my old regular feature about my game day mojo.  I mean, I still track and work on wearing the mojo-correct game jerseys and apparel; I just stopped writing about it every week.

In fact, most of my Steelers-related material is winding up on Twitter.  Now that I have an iPad, I’m “live-tweeting” the Steeler games.  If you care to play along, follow me on Twitter at @DarwinfishBluz.  It’ll be like watching the game at home with your drunk but amusing neighbor, without him peeing on the rim of your toilet.
Posted by bluzdude at 12:09 PM