Director's DVD Commentary: I'm sick.  It's just a cold; not the flu, but it was enough to keep me home Friday and maybe Monday, we'll see.  But I'm not up to posting anything new this weekend.  The most I can really manage is to wave my hand in front of my face and watch the vapor trails.  Pretty...

But to amuse you, I decided to re-post a favorite story from the early days of this blog.  Dig in, because this is a good one!

While I was on vacation, out in the farmland outside Toledo where I grew up, I had a chance to do a little pond fishing. Talk about one of life’s simple pleasures… We were just catching and releasing… My buddies and I caught a couple bass and a whole mess of bluegills… Big fun down on the farm! But it reminded me of another time back in my youth… waaaaaay back in the day… when we crossed pond fishing with a commando raid and it produced the story you’ll find below.

The Fish Story
One summer, my parents went on a trip to visit relatives, and took my younger brother and sister with them. Because I was the oldest, and had a part time job, I was allowed to stay home. (Rank has its privileges.) I was just out of high school and this was the summer before college started, so it was a given that there was going to be a party of some kind. It was just a small one… my few buds and some neighborhood folk.

One of us got a wild hair and decided we should have a breakfast fish fry the next morning. Catching 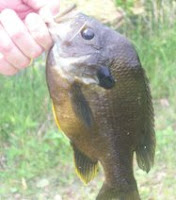 the fish would be no problem. Our neighbors directly behind us had a pond, in which we were allowed to fish. In fact, we helped stock it by depositing in it catfish, bass and bluegills that we had caught elsewhere. But why do something we were allowed to do, when instead we could have an adventure? See, there was a pond behind theirs belonged some other neighbors who never let anyone fish or swim in their pond. You could see the fish in there; bluegills the size of a loaf of bread, enormous bass… all kinds of things, doing all but poking their heads up out of the water and going “pppbbbbhhhhhhhhhtt!” We had no choice. We were provoked.

So about 10:30, we staged our little fishing raid. A handful of us crept out, rods and lures in hand, and began stealthily fishing in the pond. We could see Mr. And Mrs. Neighbor up in their house, about 75 yards away. The lights were on, so while we could look in, they couldn't see us out in the dark.

We began pulling bluegill out of there immediately… it was just too easy. It was much easier, in fact, than getting the hooks out by moonlight. We had a big bucket that we threw them in, and in no time we had about 5 or 6 in the can. At some point, we saw some motion up in the windows, so we made a dash for it, grabbing up the bucket and hauling butt. I didn't even have my line out of the water. I just ran, with the line dragging out behind me, the hooks pulling up little chunks of grass.

Anyway, we got back to The Barn, (where we always had our parties… but that’s another story) and counted up our half dozen monster fish. The fish fry was on, so now, who knows how to cook a fish? (We weren't much for thinking these things through in those days.) We knew how to filet and bone them, but very little about how to cook them. Our friend Rob, who worked with me at the neighborhood grocery store, said he’d call home to his mom and ask for a good breading recipe. Of course, she wanted to know why, so he told her and came away with the goods. The next morning we had quite a tasty little bluegill feast. 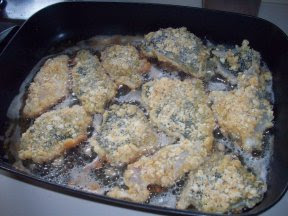 My parents came home that evening, and over dinner, I told them about our little party. Near the end of dinner, the phone rang, and the caller asked for me. It was Mrs. Neighbor, who proceeded to tell me she saw me out there fishing last night and wanted me to pay for the fish we pulled out. She said something like she wanted a dollar a pound.

Of course, I denied everything. “What fish? I wasn't fishing!” She proceeded to describe what I was wearing, right down to the hat on my head. Still denying I was out there, that I was fishing and that I even owned a hat, I finally said something brilliant like, “Even though I didn't take any fish, I’ll still pay you for them if I have to.”

I sat back down, and then told my folks about the fishing part of the party, which I had neglected to mention earlier. They basically said, “She gotcha, now ya gotta pay up.” I was resigned to my fate.

Before the table was even cleared, Rob and my other friend Rik pulled up in the driveway. I dashed out of the house and told them everything… I mean, I wasn't the ONLY one out there and I wasn't going down alone. Then I started noticing, as I described the phone conversation, how neither of them would look directly at me. They seemed to be biting the inside of their cheeks. I stopped talking and looked at them and they just exploded with laughter.

I gave them a right good cursing out, but laughing the whole time. It seems it was Rob’s mom who called, who described what I’d been wearing and heard me lie my ass off to her. Actually, I was relieved not to have to go show up at Mrs. Neighbor’s door.

I ran inside to tell my folks the good news, that it was just Rob’s mom, yanking my chain. My dad said, “Now, what are you going to do to get back at her?”

Hmmmm. I agreed that I couldn't take this lying down. Then my dad gave me the best advice I’d ever received. He said, “The best revenge for a practical joke is to make it seem that it worked too well.” Genius!

We sent Rob back to tell his mom that my dad got so mad at me that he marched me right over to the Mrs. Neighbor’s house and made me pay her off. Then he grounded me from the car for a month.

She was crestfallen when Rob told her the story… she never meant any harm. Rob must have given quite a performance too… she even woke him up late that night, trying to see if she could shake his story while he was half asleep. Rob held up though and stuck to the plan.

So, cut to the following weekend, as we were both working at the grocery store. She came in for her regular weekly shopping. I knew she’d want to ‘fess up, busting with guilt. Naturally, I did everything I could to avoid her. She came up once, with big sad eyes and a mournful look. I put on a look like someone just killed my puppy, all sad and forlorn. She asked me how I was doing. I just said, “Not so good Mrs. B., I got in pretty big trouble this week, but listen, I can’t talk now… I gotta go.”

That’s how it went for the next half hour: her stalking me to try to confess, with me trying to avoid her.

The payoff was set for when she checked out. I arranged to bag her groceries and this was the day and age when bag boys still took your stuff out and packed your car. As we went out to the car, she just spilled it. “It was me on the phone,” she said, “I’m sorry. I didn't mean to cause any trouble. I’m sorry, it was just a joke, I’m sorry, I’m sorry…”

Finally, I smiled and said, “That’s OK, Mrs. B, because I didn't really get in any trouble, I was just getting a little payback.” Her response was typical of her upbringing as an Italian mother from Brooklyn.

“YOU SONOFABITCH BASTID!” she screamed at me in her high-pitched Brooklynese. “How can you do that to a poor old woman? I oughta kick you right in the ass for that, you had me up all night from the guilt…”

We ended up having a great laugh, and happily called a truce. Meanwhile, I was giving mental high fives to my dad. He was most pleased by the way it played out, when I told him the story.

I went on to employ this tactic on numerous occasions, although it was often in the form of advice to others who’d been tricked. It has never failed me yet. 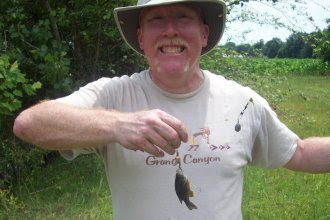 Note: All photos courtesy of ME, although they were most certainly NOT taken at the time of this story. Digital cameras were not invented yet, nor were Windows PCs, CDs, MP3s, or string cheese. We had nothing to do all day but think of ways to torture each other. Those were the days...
Posted by bluzdude at 11:35 AM

Email ThisBlogThis!Share to TwitterShare to FacebookShare to Pinterest
Labels: Stories and Misadventures, The Barn