If there’s anything I learned when growing up is to take care of my stuff.  All kids lose things and break things; I know that can’t be helped.  But I always felt really bad when I broke something… a toy, a glass, whatever.

Most of the time, it was understood that if I broke something (of mine), that was it; I wasn't getting a new one.  I knew times were tight and my parents didn't have a pile of dough to keep buying me new toys or what-have-you, so I understood.  I especially appreciated this training as I got older and had to buy my own stuff.  I learned to take care of my shit, therefore eliminating the need to replace it.

I started young on learning how to stretch out what I have, to get the most out of it.  It started with drug store candy.  If I only had fifty cents, I wasn't going to blow it on a couple of candy bars that would be gone in no time.  (Yes, “a couple.”  It was the early 70s.  Stuff was cheap.  If I had a whole dollar to spend on candy, it was fortune to me.)  I’d buy things where you got a lot in the package, like Lemonheads or Sweet Tarts.  Candy with a lot of pieces lasted much longer than a candy bar.

When I had a bag of Halloween candy, I’d work on it until December.  My goal was to make my bounty last as long as possible, as opposed to diving in for a week or two of sugared gluttony.

This tendency also took hold as I got out on my own and had to buy and ration my own groceries.  You can’t pig down all the good stuff in the first few days after shopping, or else the cupboards would be bare for those last couple days before payday and I could shop again.  I rarely had to eat meals consisting of stale bread heels and a can of peas, or barbecue sauce sandwiches.

Granted, I could have replaced some of my clothing more often than I did.  Why else do you think I just threw out my ugly 80s-era parachute-pants sweatsuit two weeks ago?  To me, it was a perfectly serviceable piece of apparel, and not to be disposed of lightly.

But because of the way I am, I have been able to keep things for a very long time, most of which have not gone hopelessly out of style.  I still have the full china set I bought before moving into my first apartment, in 1984.  Other than the pieces the Ex sold off at a garage sale, I still have all of it, unbroken and until recently, unchipped.

My regular drinking glass for my daily Diet Coke was one I got in the late 80s.  My alternate glass, showing Roberto Clemente’s rookie baseball card, I got from a McDonalds in the early 90s.  They've been with me through many moves, and even 4 years with a kid in the house. 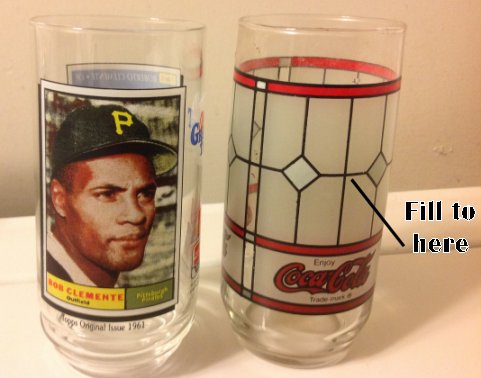 I especially like the Coke glass because I use that line as the fill-to indicator.

I believe the last thing I broke was my favorite wine glass, about 7 or 8 years ago.  I think I bumped it against the counter as I was taking it out of the dishwasher.  I can’t remember anything else I've broken, since I was a kid.

I take care of my things, and I get the most use out of what I have.

Pinky, however, does not see things the same way.  She thinks it’s perfectly normal for a grownup to break a few glasses every year.  Or the spinner-rods off of a couple sets of mini-blinds.  Or leave our plastic food containers at work, to get thrown out.  Or grab several napkins out of a stack to wipe her mouth.  Or leave a few chips in your 1984 China from banging them down together when she puts them away.

We've been going round and round about this for years now.  And every time I say “Now be careful with that,” I get a tirade about how I can’t expect her not to break something every now and then.  I tell her to concentrate, then, on breaking her own shit instead of mine.  (That doesn't go over very well, either.)

So this morning, we ended up doing this dance yet again when she suggested I throw the issue out to you.  As you know, I very rarely bring our interpersonal dirty laundry to this site, but since it’s her idea, I thought, “Why not seek outside input?”

I’m not asking you to referee or take sides, but I do want to know… how often do you accidentally break things around the house?  I don’t mean the kids; I mean you or your spouse.  How do you feel when your mate (or significant other) breaks or mars something of yours?  And vice versa?  Is it a big deal?  Or is it OK because “everybody does it?”

What about your relationships to groceries or supplies?  Are you a stretcher-outer, or a user-upper?  Does your spouse view household commodities differently?  If so, how do you reconcile the competing tendencies?
Posted by bluzdude at 6:44 PM

Email ThisBlogThis!Share to TwitterShare to FacebookShare to Pinterest
Labels: Bluz LIfe, Culture Wars, Things That Piss Me Off