Here we are on Super Sunday, as I await The Big Game between the hated hometown Ratbirds and the might-win-more-Super-Bowls-than-us 49ers.  Luckily, the Penguins are playing at 12:30, on national television, so that will occupy my time for a while.  But before that comes on, I wanted to tell you about some mildly-Super-Bowl-related goings on.

I am the Fleet Manager for my company and part of my job is to take care of the pool car that our company president uses.  Last Friday, when I was home sick, I got a message from the president’s admin that the car’s tires needed to be serviced.  She wanted me to take the car in on Monday, but I was working from home that day.

I ended up taking care of it on Tuesday and I realized it worked out for the better that way.  In order to get to the shop we use, I have to drive right by the Inner Harbor.  Turned out that on Monday, they were having a big public send-off for the Ratbirds at the Inner Harbor, complete with local governmental officials, news crews and the entire team.  It would have been a complete CF to try to drive through the area Monday morning, and that led to the following email exchange with the admin.

Bluz: Good thing I wasn’t here Monday… the Harbor area would have been a huge mess… over-run with enthusiastic Ravens fans.  Would have taken me all morning just to get to the shop.

Admin: That’s right!  And you probably would have been kidnapped by the Ravens!

Bluz: My plan would have been not to slow down below 40 mph.  I’d dare them to get in my way.

Admin: Squished birds all over the highway.

Baltimore: Purple mixed with red Monday morning, as the love affair between the Ravens and their city was interrupted by bloodshed, when a local man drove a leased Chevrolet Impala into the team bus as it departed for the airport.  The driver was taken to Shock Trauma with minor injuries, and was heard to repeat the mantra, “Ray Ray must pay,” over and over again.

Admin: Even though I’m a Ravens fan, I have to admit this is hysterical.

Bluz: It’s my calling… the by-product of journalism classes mixed with a bad attitude.

In other office news, my department had a Ravens Wing Party on Friday.  I think I surprised them by asking to attend (and paying into the party fund).  Obviously, I don’t want the Ravens to win, but hey… Wings!  I’m in.

When they asked me about it, I just said, “Well, it’s a team event, and I’m part of the team.  And I’m sure that if it was the Steelers in the Super Bowl, you’d be throwing a Wing Party for me!”  [Snork!]

Yeah, that went over well.

The NFL announced the next inductees into the Pro Football Hall of Fame last night, and to me, there were mixed results.   Steeler running back Jerome Bettis was passed over for the 2nd time, which bothered me greatly.  This is a guy that retired as the 5th leading rusher in the history of the league, and the only one that could be considered a “big back.” 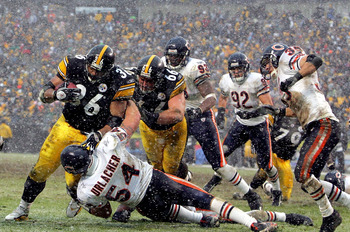 In the definitive Bettis play, The Bus steamrolls the Bears’ Brian Urlacher in the snow.

I realize that for Jerome to have made the Hall this year, someone else would have had to come off the list.  I would have removed Warren Sapp, who was in his first year of eligibility.  I never thought he was all that.  The Steelers’ Alan Faneca owned his ass.

But on the bright side, Ratbird owner and traitor Art Modell didn’t make it.  Personally, I don’t see where he’s qualified for the Hall at all.  Aside from moving his team out of a city that adored it, he was just a lousy businessman.  Here’s a guy that got the mother of all sweetheart deals when he came to Baltimore… Brand new stadium, built at taxpayer expense… essentially free use of a state-of-the-art practice facility… and he STILL had to sell out to someone else, just to keep the team going.  He couldn’t even leave the team to his sons.  How is that indicative of a Hall of Fame owner?

The Ravens’ left tackle Jonathan Ogden also made the Hall and I have absolutely no quibble with that.  The guy was 6’9”, 350 lbs, and absolutely sealed off the left side throughout his entire career.  I bet Joey Porter still has nightmares about going up against the guy.

So, my plans for the day are pretty simple… Penguins at 12:30, then I’ll fiddle about for a couple of hours… I’m not looking forward to all the pre-game Ratbird-centric hoopla.  The game starts at what, 6:30?  I’ll be live-tweeting the game, so do keep your tablet handy.  I’ll try to be entertaining or at least informative.  To join the party, follow me at @DarwinfishBluz.