The One Where I Call Out the Liberals

If you’ve spent more than 15 seconds on this site, you know where I fall along the political spectrum.  I’m pretty hard-left.  But that doesn’t mean I support everything labeled as a “liberal” idea.

For example, I keep seeing all these shots at Donald Trump’s comments about his daughter, which include insinuations that there’s something creepy going on. 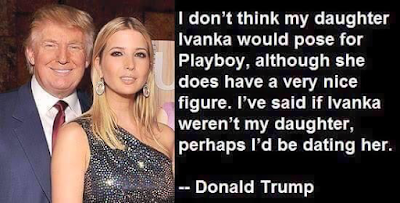 Now far be it for me to be seen defending the likes of Trump, but in this case, I think it’s a case of liberals looking for anything they can use to throw mud at an opponent.  Granted, this is what Republicans have been doing for years, with Obama and both Clintons, but that doesn’t make it right.

As far as I’m concerned, there’s nothing wrong with a dad being proud of his gorgeous daughter and saying so.  He might not articulate that pride in the clearest sense, but then this is a guy who’s using a 4th-grade vocabulary to campaign in the first place.  So it stands to reason there was room for innuendo in his comments.  But that doesn’t make it pervy and it diminishes our side to dwell on it.  There are so many more relevant things over which to criticize him.

He should just turn it around on people and say, “I condemn you for Dad Shaming.”  That’s another big thing now with the Left… you can’t suggest, even in the mildest terms, that something might not be up to snuff with someone or it’s “shaming.”

You know, sometimes people might be better off learning they’re not wrapped within the aura of fabulousness they imagine for themselves, and it serves them, and those around them to mention it.

I say you condemn the big stuff as shaming, like calling someone out on the air for daring to purchase birth control, or publishing names of those who have sought abortions, or publicly ridiculing someone using food stamps.  That’s shaming.

The rest of this stuff?  That’s just life.  You have to learn to deal.

Used to be that you went to college to drink beer, meet other young people, and occasionally learn things.  If you’re lucky, you learn some mental life skills.  But now it seems to be all about “safe spaces.”

On the surface, that’s fine.  It would be grand if college students felt safe from assault, attack, and ridicule while on campus.  But "safe from attack" has morphed into "safe from being challenged," which should be the very goal of a college education.

There’s no need for spaces safe from feeling uncomfortable, especially if one’s discomfort stems from having their beliefs and attitudes challenged by things like “science,” “evidence,” and “logic.”

If one’s only goal is to be told that everything they already “know” is actually true, one has no business on a college campus, other than to deliver pizza.  Parents who want their kids to come back from college with the same mindset they had when they went in, should save their dough and just keep the kids living their old bedrooms.  Maybe let them out for church.

Colleges aren’t there to hand out participation medals to every little snowflake like it was just another soccer league.  And that’s another travesty: the participation medal.  I hate that “no winners or losers” philosophy, because the second the kids move past childhood, there absolutely are winners and losers, and those expecting to be handed a trophy just for showing up on time will be in the latter group.

Heaven forbid you refer to them losers, though, or you’ll be guilty of loser shaming.

I am so tired of the verbal gymnastics you have to go through, just to refer to someone in particular.  Everyone has a special multi-syllabic preferred descriptor now.  We’re a society that is completely carved up and dealt with by applied labels and demographics, but we aren’t allowed to refer to them in plain language. 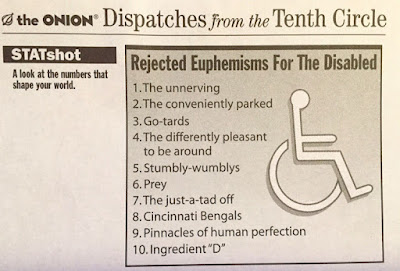 Courtesy of my The Onion Day by Day Calendar.  (#3 still makes me LOL.)

When did we get so hung up on superficialities that we ignore intent?  For I just don’t see a problem with saying “That black guy,” or “That white guy…”  To me, they’re just descriptors, without value judgment.

I’m old enough to have seen Blazing Saddles in the theater (as a junior high student, with my whole family, including my younger brother and sister.)  This morning I just read an interview with Mel Brooks, who is celebrating the 42nd anniversary of his western spoof, and he was lamenting how it could never be made in the current environment.

By today’s standards, someone would be there with a clicker, counting ever time the N-word was used, and that alone would  kybosh the film.  Thankfully, back in 1973, someone was paying attention to the context, in which the idiot townspeople were the ones using the N-word and the black sheriff was the smartest guy in town, defeated the bad guys and won over the townspeople.

That’s how you defeat racism; not by becoming the word police.

Obviously, I’m not coming out in favor of using pejorative terms for people.  I think we should be polite, respectful, but direct.  In other words, try not to be a dick.

And I suppose I should apologize to all the dicks out there now, who I have just dick shamed.
Posted by bluzdude at 8:02 PM