Happy New Year to you. I wish we could be celebrating under better circumstances, but at least we’re still out here thrashing around!

Today was my first day back at work since 12/21, so in my mind, I’m still day-drinking and watching sports. Only my butt was back at my desk at work. Eventually, my heart and mind will follow.

So what did I do with my 11 days off? I can put it into three categories:

Like I mentioned in the last post, Sweetpea throws a big Christmas breakfast every year, in which in addition to her family, she invites anyone else who doesn’t have anywhere else to go or anything to do. (Translation: Singles and Jews.)

So Saturday and Sunday were spent getting the place ready for the crowd, except for the part on Sunday where I went to the sports bar to watch football. Charitably speaking, I was “getting out of her hair.”

Because of the Christmas morning craziness, we had “our” Christmas and exchanged gifts on Christmas Eve. My favorite gift? This shirt: 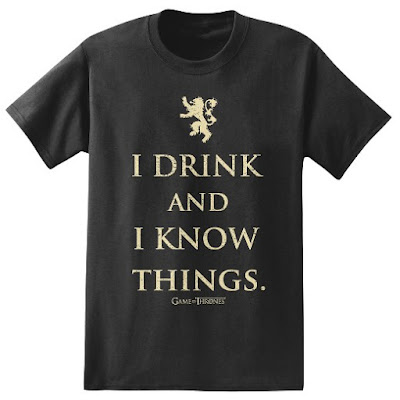 That’s one of my favorite quotes and I don’t even watch Game of Thrones!

The biggest challenge for Christmas Breakfast, (aside from keeping the dog from barking his head off in desperate attempts to get people to play ball with him outside), (in the COLD!), was getting everyone back out of the place so that we could make a break for my brother’s house and watch the Steelers game at 4:30.

We almost pulled it off, but about an hour before we wanted to leave, Sweetpea’s old 10th-grade teacher showed up, after everyone was gone and all the food was put away. So he supervised the cleanup we were doing, talked sports with me, and we literally walked him out the door as we were on our way out ourselves.

In keeping with the Christmas spirit, the Steelers won handily, so we didn’t have to live and die on every snap. For a change…

On Tuesday, the day after Christmas, we headed for Pittsburgh. I’ve wanted to show her around the Burgh ever since we met. Because we were busy this summer and she won’t get much of a spring break, we decided to use Christmas break for the trip.

On the plus side, the timing was perfect for our schedules. On the minus side, on the day I wanted to show her around the town, it was 11 freakin’ degrees out!

Anyway, we checked into the gorgeous Omni William Penn, got settled in, and then headed out to the burbs to see my family. Sweetpea got to meet 2 aunts, 1 uncle, 3 cousins, and 2 cousins-once-removed (or whatever you call your cousin’s kids).

As always, we enjoyed good stories, good drinks, and amazing food. Aunt Mary laid out some manicotti to die for! 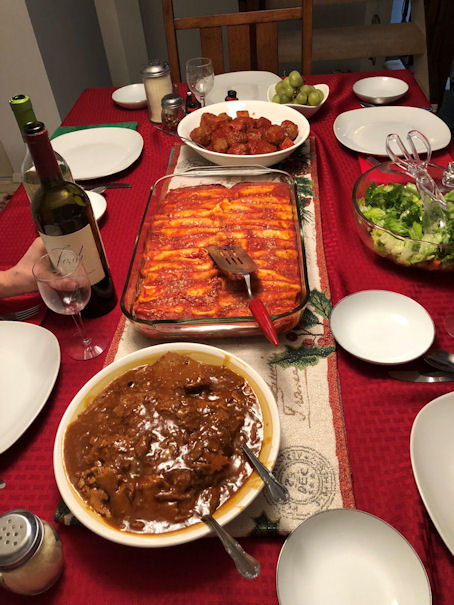 In fact, she had me email my dad some pictures of the food, just to rub it in that he wasn’t getting any. Yes, wise-assery is a family trait.

We also got to hang out with another special girl, Aunt Mary’s sweet little Samantha. 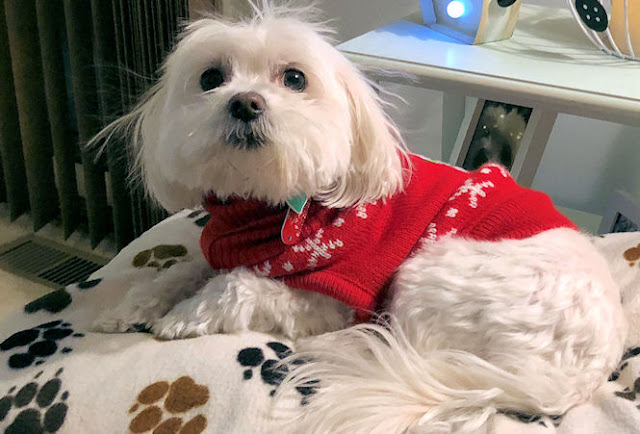 The Queen, on her throne.

The picture doesn’t really give any perspective, but Sweetpea’s dog probably has 80 pounds on her. This dog could sit in the palm of my hand (if she kept very still).

Somehow, we managed to escape before falling into a food coma, and made our way back to the Penn, to rest up for our Big Day.

I’d been watching the weather for the prior week so I knew it was going to be cold; it was only a matter of degree. (Heh) I was hoping the forecast would change, and it did. It kept getting colder. I had a few specific things I wanted to show off, so I planned a more direct route than I might have otherwise.

So, we knew it would be cold and we dressed accordingly. But still… we stepped outside and WHAM. It was like walking into the side of an igloo. Of course, it depended on where you were. There were parts when we were in the shade and the wind was blowing, and it was like you were going to die right there on the street. Then in other places, out in the sun, it didn’t feel so bad.

So, our points of interest?

The Allegheny River and the ballparks and bridges that line it. 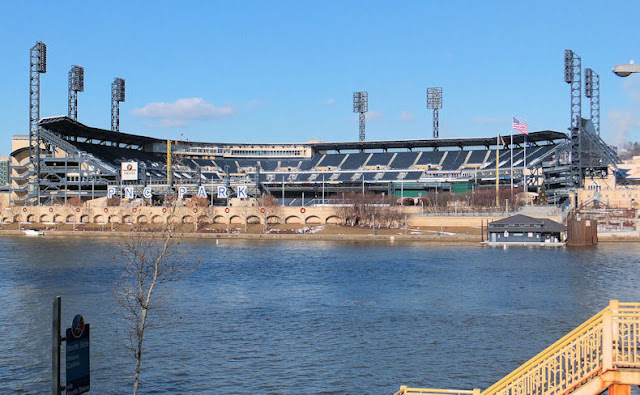 I’ll have to wait until baseball season to show her how awesome it looks, looking the other way around. 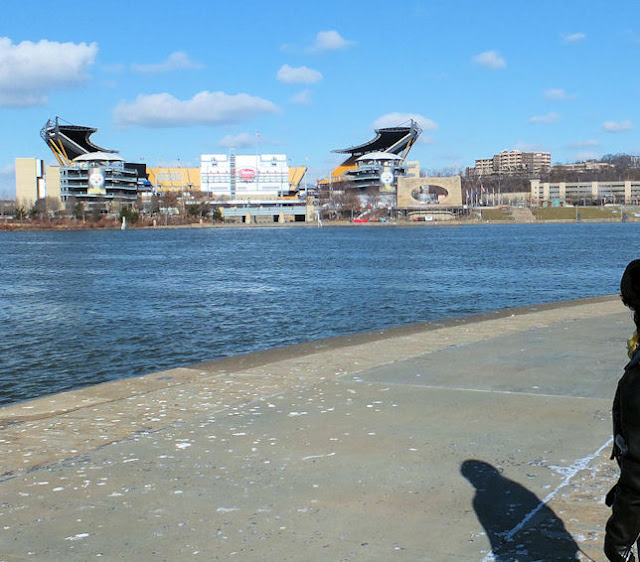 OK, that’s not technically true, but it could have been. We basically had the city to ourselves. While we were down at the Confluence, there was nary a body in sight. It was like we were plopped down in the zombie apocalypse, without the zombies.

I couldn’t wait to show her PPG Plaza, which is gorgeous on most days, 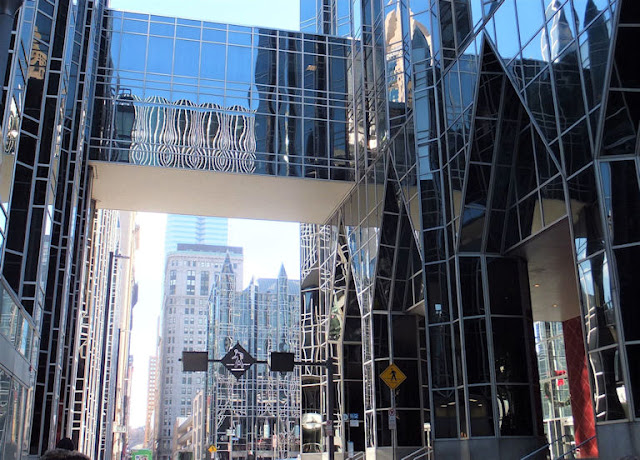 but even better with the Christmas tree and ice rink. 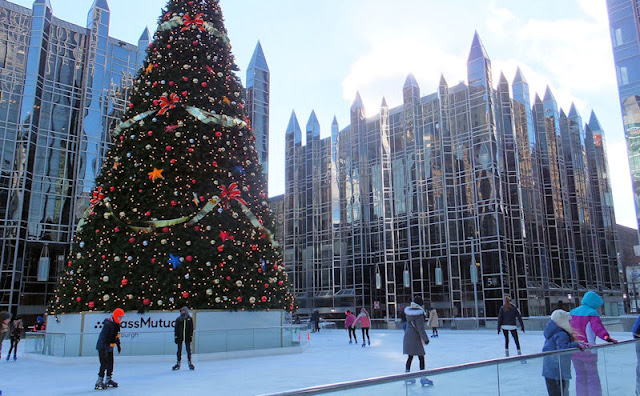 By the time we got to Market Square, we were pretty much done with browsing; we needed someplace to warm up and get a bite to eat. We ended up at Diamond Market. 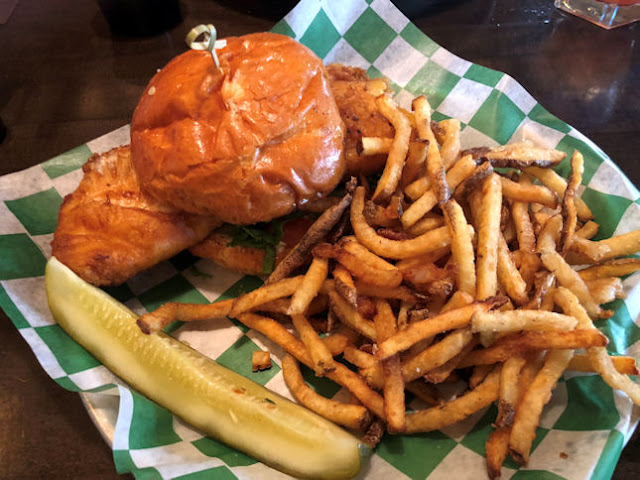 I was quite happy to tuck into the Colossal Cod sandwich.

On the way back to the hotel, we found a wine and spirits shop downtown, from which we picked up a little bourbon. Once back to the Penn, we poured ourselves a couple of drinks and went down to sit in the lobby. 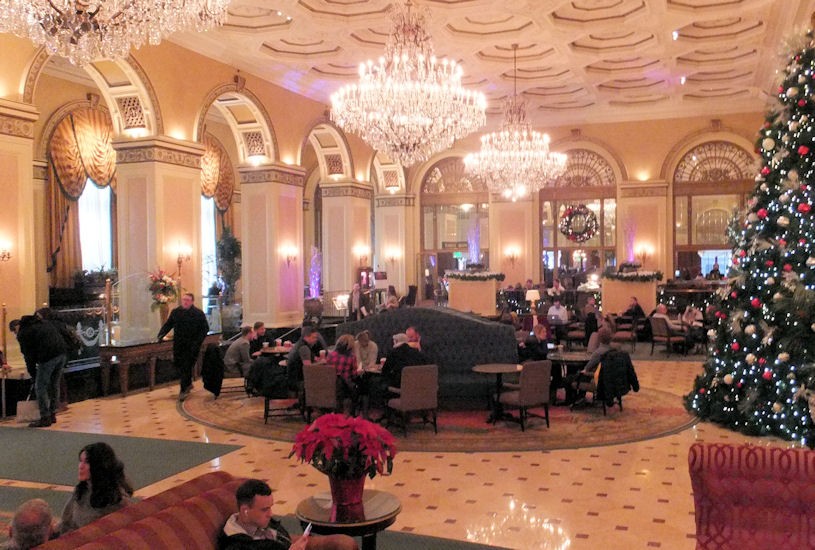 Sitting down there with our drinks on the couches, it felt like we were movie stars in some 1920s musical. I kept waiting for a flash mob to show up. 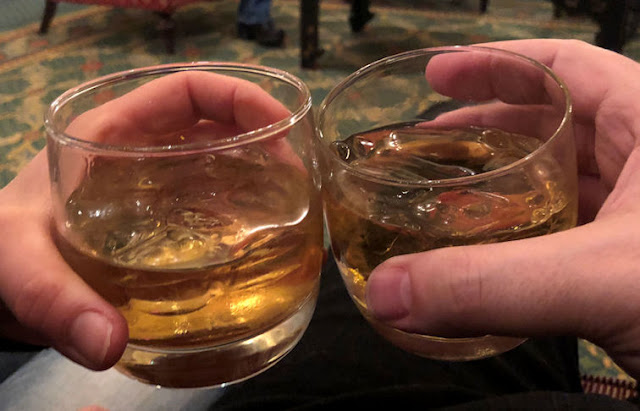 Once sufficiently warmed up, inside and out, we retired to the room for a much needed nap. Hey, nobody parties like fifty-somethings! But we wanted to rest up for the main event: The Pittsburgh Penguins vs Columbus Blue Jackets! 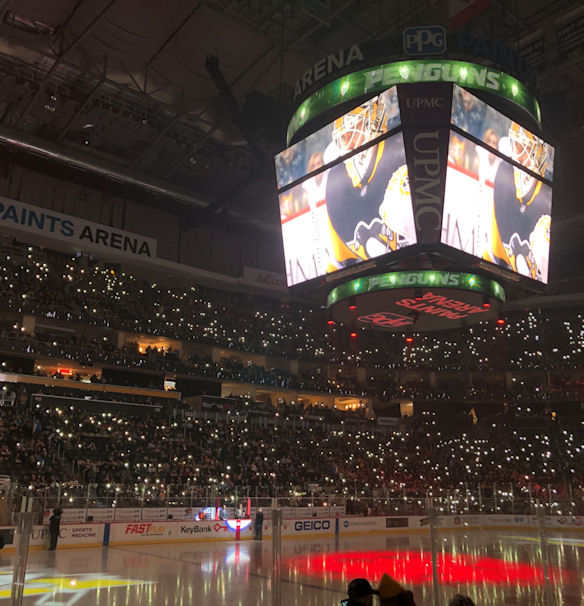 We had seats in the 6th row, down by the corner on the side. This was Sweetpea’s first NHL game, so I wanted us to sit up close. The location was good for catching a number of nice pictures:
Unguarded moments… 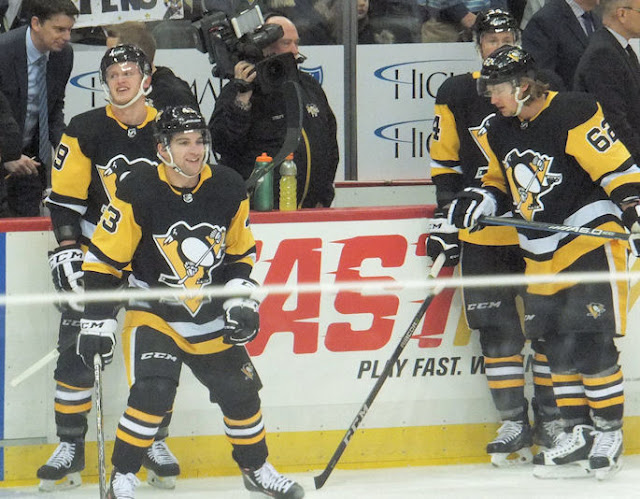 Jake Guentzel and Conor Sheary have a laugh.
…sly smiles… 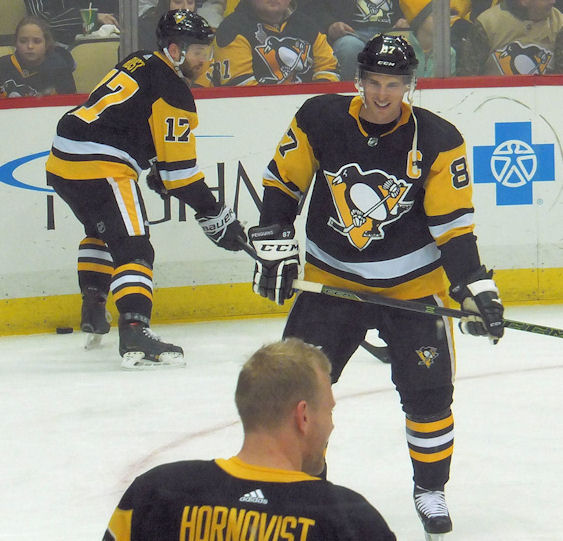 Sid Crosby laughing at Hornqvist, probably about the missing “u” in his name.
…special moments… 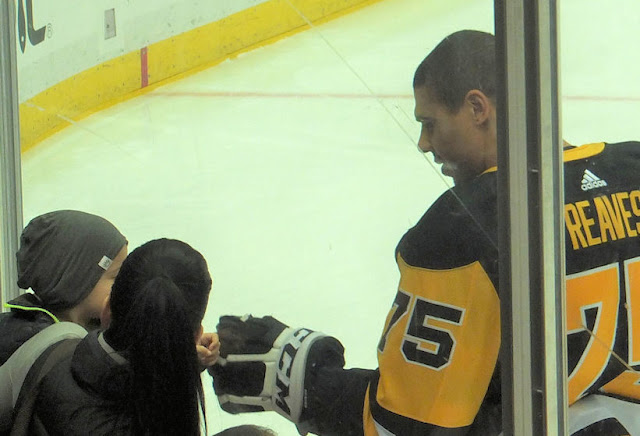 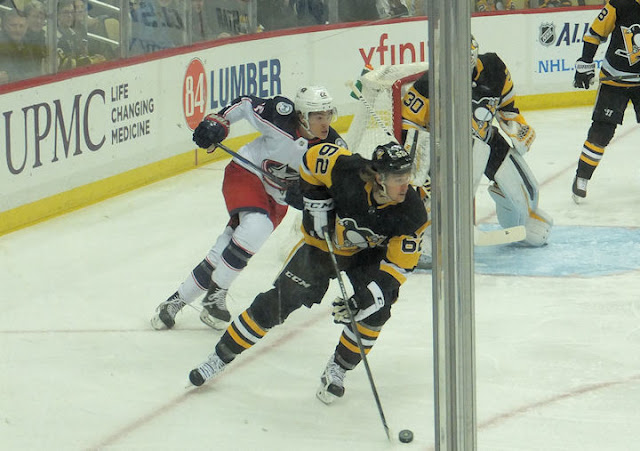 Carl Hagelin on the move.

So it was a good game… the Pens were down early but fought back to score two in the third period and tie it up. When the Pens scored in overtime, we immediately high-tailed it out of there. The last thing I wanted to do was get trapped down in the lower bowl, waiting for our turn to get out.

If we’d stayed in our seats, we would have had a primo angle. But from up on the concourse, our view was more like this: 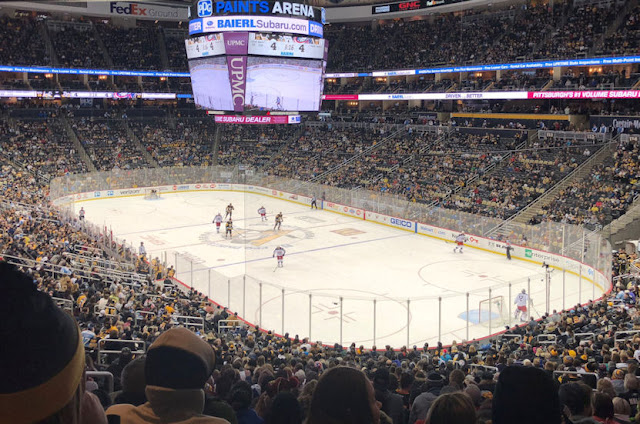 Actually, this would have been pretty sweet, but once the shootout started, everyone in the place stood up and all we could see were backs and butts, so Sweetpea and I had to watch the monitors.

Still, it was fine. The Pens won by scoring on their first two attempts while Columbus missed theirs. And with that, we were out the door in a flash. We were back up to the room (3 blocks away) before we would have even gotten out of the lower bowl if we’d stayed.

Thursday morning, we had breakfast at the Penn with an old family friend of Sweetpea’s, after which we hit the road. Got back to Baltimore by 2:45, easy as pie.

And it was a good thing we didn’t linger. I saw on the news that night that a semi overturned about 5:00 pm and blocked all three lanes of 1-70 just outside of Baltimore. Jam went for miles and lasted three hours. Count one little slice of hell avoided.

Way back at the beginning when I mentioned the three parts of last week, you may have noticed that I omitted New Years. That was purely intentional… we didn’t do jack. Stayed home, watched some football, watched the fireworks on TV and went to bed.

Thank you again for coming to visit my little corner of the internet. I hope you have a grand 2018 and I’ll do my best to provoke thoughts, laughter, and general crankiness. I’ll be back next Monday with some four-star debunkery.
Posted by bluzdude at 8:50 PM