Debunkery – The Edition for Those Who Don’t Get It

I really just wanted to debunk some Facebook memes today but have you heard about that book that came out?

Man, that’s all anyone’s talking about for the last week and for good reason. This “Fire and Fury” book, by Michael Wolff, illustrates how unfit to hold office our current president is. And it doesn’t just make charges, it tells you how and why, with loads of details.

Obviously, the credibility of the writer went straight into the GOP crosshairs. I mean, of course it did… that’s Play #1 in the Republican Playbook: call whatever you don’t like a lie.

The biggest problem here is that the president is the most dishonest executive officer this country has ever seen. With well over a two thousand documented and disproven falsehoods uttered in office, how can anyone truly believe anything he says? Only the True Believers, that’s for sure; them and those who just don’t care as long as they get their taxes cut and regulations removed.

It’s also funny seeing them criticize the lack of attributed quotes. Yeah, big mystery why there’s not more of those in the book. Did you see what happened to Bannon? Trump turned on him like a dog who’s found a spot to lie down. And they wonder why more people didn’t speak on the record? 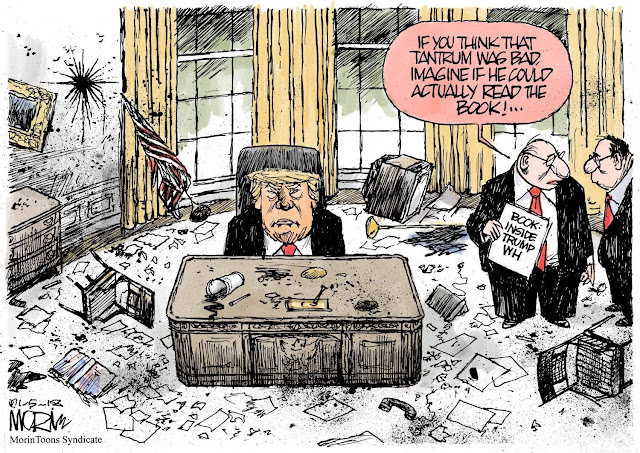 Just because a quote is off the record doesn’t mean it’s not true. In fact, I think it’s MORE likely to be true. No one but a moron would put his name on a damaging quote about this administration. Just ask Sloppy Steve. Hell, even his own brain-dead following turned on his ass, after he criticized their fearless “leader.” They don’t want anything getting in the way of President 45 making America great again for all those poor, persecuted white men. They’ve suffered enough, thank you very much.

Anyway, because the major sellers are out of the book already, I’m going to look into getting the e-book. But on the other hand, I’m almost afraid to hear any more… My faith in the innate goodness of people is already at rock bottom. How much lower can it possibly get?

No, I don’t think any real changes are going to come from the book’s revelations. Supporters will just claim it’s all a lie and continue towing the conservative line. People really don’t want to see this Emperor without clothes. But it does amuse me how pissed off the president got about it. All he wants is praise and adulation from the masses, and the little that comes in is being drowned out by all the laughter at his incompetence and that of his enablers.

Debunkery
In other news, Facebook teed up another one for me last week. I saw this posted on the news feed of a conservative friend: 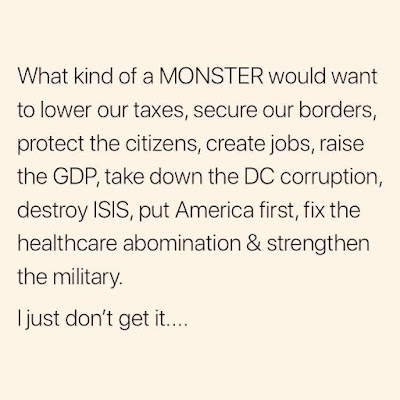 I know why the writer doesn’t get it.

It’s because he is not smart enough to know when he’s being lied to. He apparently believes everything that emanates from Fox “News” without a second thought.

So here are some second thoughts, bit by bit.

What kind of monster would “lower our taxes…”

He’s not. He’s distributing 83% of this tax cut to the richest 1% of the population and leaving the rest to the remainder of the country. And when you look at the deductions that are being removed, millions of lower to middle-class families will be paying more. And THEN, what little benefit the middle class is getting will disappear in 6 years, because they were made to be temporary. So no, unless the meme was created by a Koch brother or one of his rich allies, there is no tax cut.

Secure our borders from what? A horde of gardeners and farm workers? The wall is the worst way to actually prevent illegal immigration, not least of it is because they’ll never seal off the river that runs the length of Texas’s border.  There is no wall that people can’t go over or around. Hell, it happens right now with the drug cartels. They build tunnels worthy of our interstates and are probably in better shape, what with our lack of infrastructure spending.

Putting up a wall makes us no better than cold war East Germany. You want to deter illegal immigration, fine companies that hire them. No jobs, no immigration.

From what? The tens of thousands of gun deaths that happen in America each year? No, they’re more interested in trumpeting when some immigrant commits a crime. Doesn’t matter that immigrants to America, even the illegal ones, are statistically less likely to commit a crime than native-born Americans. What’s the message there? That we will only stand to be killed by our own kind?

A complete myth. Tax cuts at the top do not produce more jobs at the bottom. It didn’t happen when Reagan did it, nor when Bush did it, nor when Kansas or Wisconsin did it. Corporations pay out their newfound dough to their shareholders and executives. They only hire more workers when there is consumer demand. So the jobs don’t come until the lower and middle classes are flourishing. You want to see that happen? Make the big tax cut package 83% to the lower and middle classes and give the rich the 17%.

Same as the jobs thing… production and consumption don’t go up until the 98% is buying. This president hasn’t done jack for the working class.

Are you serious? This Administration is gorging itself on the public trough. Trump, his family, his cronies of industry, they’re all gutting safety and health regulations so to make the least impact to corporate bottom lines. Our safety and health don’t factor into it one bit. The family business is getting fat on the President’s trips to his own resorts alone, let alone all the foreign business coming their way from those states who want to curry favor.

And when the president stays at his own resort, remember it’s not just him; it’s the entire presidential entourage. Everyone from Secret Service to aides and handlers needs to be put up and fed. Think that’s free?

I’ll give that he’s made progress. But ISIS comes from an idea, one that can’t be bombed into submission. Radical Islam will abate when their lives become better. And if this Administration can’t do anything for the masses in this country, they’re certainly not doing anything for a bunch of foreigners.

Putting America first basically entails reneging on our treaties and turning on allies. On the major issues of the day, we no longer have voice or influence because our leader is too busy watching out for himself. Isolation doesn’t work. Show me one isolationist country who’s thriving.

There aren’t any. This is a global economy, now more than ever. Living in a bubble won’t do anything more than suffocate us.

You mean remove healthcare from millions of people? Done. Better hope you stay healthy because the entire system is about to come crashing down, without a single idea on how to replace it. When only sick people buy insurance, insurance companies can’t stay in business without raising rates for everybody, through the roof. What we have now is not a health care policy, it’s a crime against humanity.

Are you fucking kidding me? We have the strongest military in the world and spend more on it than the next top 12 countries combined. We need to worry less about building our arsenal and more about finding ways not to have to use it. But with the systematic neutering of the State Department, that’s not going to happen. You know that story about when the only tool you have is a hammer? That’s us, looking to nail every political problem we encounter across the globe.

Yes, it’s obvious that you don’t get it. I attribute that to a raging lack of education and critical thinking skills. You’re too busy parroting Republican talking points to give a thought about what you’re spouting and how you’re really being affected, as your quality of life swirls down the toilet.

Your ignorance is taking the rest of us down with you.
Posted by bluzdude at 5:22 PM