Leave it to ol’ John McCain to leave everyone all riled up, even after his death.

I saw today that after flying the White House flag at half-staff over the weekend, the Trump Administration has it back up to full-staff already. The recent precedent, when such a dignitary passes, has been for it to remain at half-staff until the funeral. Just one more thing that if Obama had done it, there would have been seething rage pouring from the Right.

It was a shame that Senator McCain passed so soon. While I didn’t agree with his politics, he was a gentleman of conviction and class, and a throwback to when politics wasn’t a zero-sum game.

Everyone’s mentioning that town hall clip where he cuts off the lady blustering about how Obama was an untrustworthy Arab, telling her that he is a real American and a fine man, one with whom he has a difference of opinion.

Would that all politicians man-up and squash hysterical misinformation like that. Of course, it might have cost him the election, being all decent in the face of ginned up anti-foreigner propaganda.

Same with his refusal to “go negative” during the campaign. In the HBO movie “Game Change,” the story of the McCain/Palin campaign, his advisors implore him to drop the civility and go negative against Obama. Release the Palin and all the froth she could whip up.

John McCain refused, saying he wanted to run a civilized campaign and talk about the issues rather than denigrate his opponent’s name and character. I’m pretty sure that also cost him dearly in the election.

I respect his principled decision, but I fear he will be the last Republican to take such stand. The modern Republican base will not be happy with a campaign about mere policy. They’ll want blood. And “Lib tears.” And if they lose on that platform, hey, it’s just more evidence that George Soros and Hillary Clinton have the whole thing rigged, right?

Selective Attention Rages On
Last week, authorities found the remains of Mollie Tibbets, that Iowa girl who had been missing for over a week. It had been a story on my Yahoo page, seemingly, forever. After all, the missing was a nice looking, white, college girl. Black girls go missing all the time without creating a national story.

And then, it turns out she was killed by an illegal immigrant from Mexico. Cue the nationalistic politicization machine! 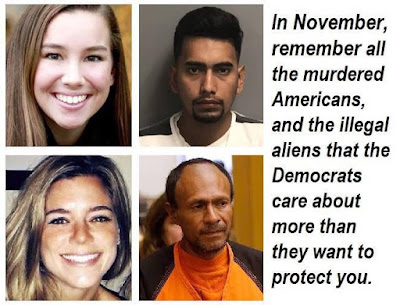 Yep, by objecting to children being torn from their families and put in cages, Democrats hate you and want you killed by the brown scourge.

Why is it that we can’t seem to entertain multiple thoughts at one time? Can’t we keep families intact (many of whom are not “illegal” at all, but merely seeking legal asylum), while still creating a rational immigration process that bars dangerous people from entering?

Note to Republicans: Being brown is not indicative of being dangerous. But the Right is so racist today, they try to give credit for Johnny B Goode to Michael J Fox. 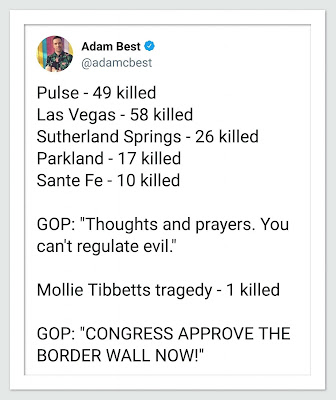 It’s like, “I’m Amurcan and I demand to be killed by only another red-blooded Murcan, preferably one who is using a Second Amendment-protected semi-automatic firearm. We can’t have these ferners coming in here and doing all the killing… that’s OUR job! Hooah!”

Case in point: we had another mass shooting this weekend. Another anti-social, sullen, white boy shot up a video gaming contest after losing his match. Whatever happened to just throwing your controller after getting blown out on Madden? Sheesh!

If only there was a “good guy” with a gun there, to fire back and totally not hit anyone else in a crowded, panicky room. But here we are again, with two dead, (plus the shooter via suicide) and over a half dozen more injured. Can’t you just smell the “freedom” in the air?

Locally, there’s been some news around town that the City of Baltimore is trying to be better prepared to save people who fall in the water at the Inner Harbor. Walking to work this morning, I saw some new life preserver stations lining the waterway leading to the Harbor.

I think they have more work to do. Considering the quality of the Harbor water, they need fewer stations for life preserver rings and more stations for Silkwood Showers.