And here I was, about to write about the holiday weekend, where my nephew graduated high school, for which my parents were in town, and how they finally got to meet Sweetpea.  But then real life intruded, as it is prone to do.

Over the aforementioned weekend, I began to experience a reoccurrence of the atrial fibrillation I last had in 2013.  I lived with this condition for many years and had surgery to correct it in 2002 and again in 2007.  Since then I’ve only had the one relapse four years ago, brought on by a long swig of ice-cold beer.

This time, I couldn’t identify a single cause, although the weekend’s carousing probably didn’t help.  But I knew the signs right off.  Chest felt funny and the smallest activity made me feel fatigued.

Per my cardiologist’s instructions, if I got down there within 48 hours of onset, I could get a cardioversion or “shock” treatment to jolt the heart back into rhythm, without the lengthy and invasive pre-op treatments and blood work.

Basically, it was a déjà vu experience, but with lessons learned.  This time, I knew not to expect to be out by 10 AM.  I got up super early and logged into my work computer from home, so I could clear any tasks leftover from the weekend and notify my boss that I’d be MIA today.

Sweetpea took me down to the subway station around 6:30 and agreed to pick me up at the hospital later, after working a half day.  She offered to come with me the whole time, but I told her it wasn’t necessary.  I’ve been to this rodeo before.

Anyway, I got down there, got evaluated in the Emergency Room, which confirmed my self-diagnosis.  They assigned me a room and had me take off my shirt and put on the dreaded hospital gown  This model was even more confounding than the previous ones.

I held it up and there was one hole, off to the side, bordered by snaps.  There were some other random snaps scattered about the other side.  I couldn’t tell if it was a head hole or an arm hole, so I stood there like an asshole until an orderly came in, who I asked for help.

Apparently, the one hole was an arm hole and he fashioned another arm hole out of the snaps on the other side.  These things need to have a schematic diagram printed on the inside.  Maybe IKEA can roll out their own line.  I wouldn’t have figured that out in a million years.
They immediately stuck a port needle into my right arm but didn’t hook it up to anything.  Then later, they put one on my other side, at my wrist.  That one, they eventually used for the anesthetic.  The first one, they said when I asked, was merely a backup.  I think they just put it there to piss me and keep me tied down. 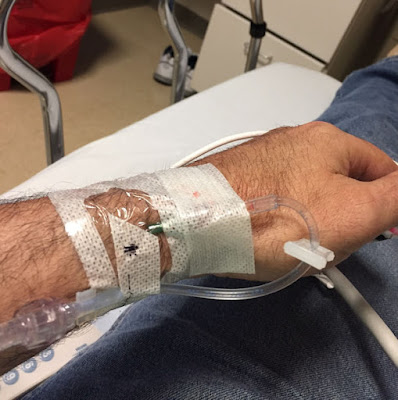 The port on my left wrist.

The staff was all very nice and as usual, I made sure they loved me.  I was polite, helpful, thoughtful, and joked around with them.  I wanted them to love me in case something went wrong during the procedure, so they’d try extra hard to save my ass.

There was a lot of waiting around again, but not nearly as much as the last time.  But it was nice they had a TV in the room, to keep me occupied.  It was even nicer when I could use the remote to turn off Spongebob Squarepants and put on ESPN and the NFL Network.

It was ice cold in the room so they broke out a pair of hospital socks for me! 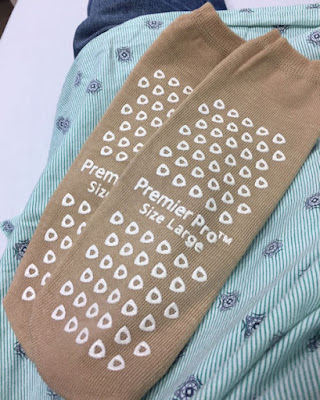 Around 11:00, I got word that approvals had been given, all systems were “go” and they were preparing to do the cardioversion as I wished (as opposed to prescribing meds or admitting me for overnight observation.)  And they were going to do it right there in the ER, rather than taking me up to the cardio unit, where they did my last one.  Hence, my small room began filling up with people.  One of them started putting the big adhesive pads on my chest and back, where the shock paddles were to go.

It was a weird point of view.  As I laid there, there were two people to my left, two people to my right and someone at the foot of the bed.  From my angle, it looked like I was looking through a bug-eyed lens at a small crowd peering down at me like I was a lab experiment.

I cut her off and said, “Dudes get electrocuted?”

Usually, when I’m put under, it’s an instantaneous blackout, like at the end of the final episode of the Sopranos.  One second I’m there, the next second I’m out and back again at a later time.

This time, when they pushed the drugs, they looked at me and said, “How do you feel?”

At that point, I said, “Fine!  What’s the matter?  Want me to count?”  Nothing was happening.

All went well, so they all packed up their shit and left me there to rest.  Heartbeat was back to normal.  I’d have loved to take a nap right there, but that was made impossible by the automated blood pressure cuff that kicked into action every five minutes for the next 2 hours.  But I could hear the now-steady beep beep beep of my heart on the monitor.  And that sure beats the hell out of Beeeeeeeeeeeeeep.

Since I couldn’t sleep, I turned to the NFL Network just in time to catch a replay of the Steelers/Ratbirds 2016 Christmas Day game (which the Steelers won in a huge comeback).  I didn’t even have to take out my crossword puzzle or iPad. 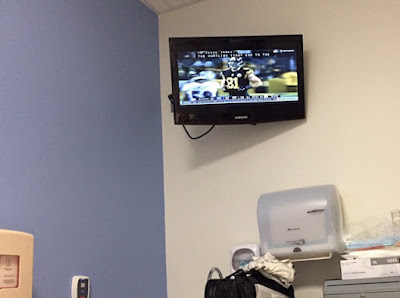 Sweetpea got there just about 3:00, just in time to witness them pulling all the adhesive pads off my chest. 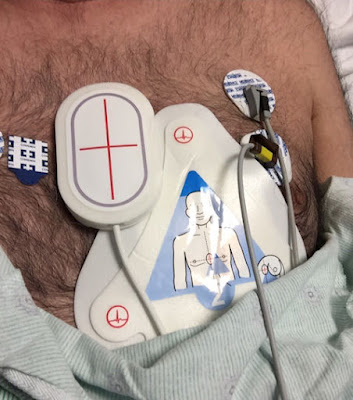 I knew I should have shaved first…

I think they waited for her to be there just so I wouldn’t fuss and whine when they yanked it all off.  After dispatching the smaller patches, the nurse asked me if I wanted to do the big one myself.  I was like, “Hell no!  We’ll be here all night…”

It takes me 45 minutes just to get all the way into a cold swimming pool.  I’m not good with the big shock.  Left to my own devices, I’d have had them bring me in an Exact-O Knife.  So I let her do the honors and I tried very hard not to recreate the waxing scene from 40-Year-Old Virgin.

Earlier, when Sweetpea and I were waiting, she asked when they were going to come in and get me ready for discharge.  I didn’t know… they just kept turning up intermittently throughout the afternoon.  She said we should use the Call Button.

I wanted to wait.  It was getting to the end of the Steelers/Rats game and I wanted to see the end.  I didn’t want someone talking to me and giving me instructions while I was trying to watch AB stretch out over the goal line for the big “W.”  So I said we should wait until 3:30 because that was an even four hours after my procedure.

Minutes later we heard an announcement; there was a trauma coming in, which was three minutes out.  All doctors were to get ready.

Shortly after, when the nurse came in to remove my adhesive pads, she mentioned that I’d be free to go but all my doctors were tied up in that trauma.  She didn’t know how long it would be, but only a doctor could produce my exit paperwork.

So you can imagine the steely stare directed at me from Sweetpea.  If I’d have used the call button when she first mentioned it, we’d have been out of there.

I promised I’d listen to her from now on.  But I DID get to see the end of the game.  Whoo hoo!  Here We Go Steelers!

We didn’t really have to wait much longer, though.  We were out the doors by 4:00 and on the way for a Chinese dinner.

What?  There are a lot of vegetables in Chinese food… It’s GOOD for me!  I have to be health-conscious now.

The last thing Sweetpea told me?

"Next time you want to see me on a weeknight, just ask."

I tell you, this one's a keeper.  I just have to make sure I stay around.

Very few people can make a heart issue humorous. I would expect nothing less from you. Nor would I expect you to rush out of there and miss that game. Take care of youself!