Is it me, or this town, or is it getting irretrievably ruder across the country?

Last week I took my sweetie out to see one of her favorite artists, John Mellencamp, play the Lyric Theater in Baltimore. It was her birthday present and we’ve been looking forward to this night out since last October.

The Lyric is a cozy little venue, holding just over 2500 people. I used to like these small venues because they made for such a personal show. But not anymore.

Why can’t people just shut the hell up?

Right off the bat, Mellencamp told us there would be some rockin’ parts of the show and some quiet parts, and if anyone felt like yelling and screaming during the quiet parts, they should go out in the hallway.

Cut to a quiet part, where he was trying to tell a story to introduce a song, and people start yelling out songs they want to hear. He says, “Didn’t I tell you to go out in the fuckin’ hallway?”

Big laugh line. He obviously set that up on purpose. So then what happened?

He tried to backtrack and continue with his story and again, he had to stop because of some people talking up front. That’s the thing with these small venues… if you’re yapping or yelling in an arena or stadium, the artist barely knows it. But here, they hear everything.

He told them again to knock it off. He said, “I’ve played over 70 shows on this tour and this is the first time this has happened to me.”

Again, he had to pick up the thread of his story, and eventually, it led right into a song. That’s the thing about performances like this… there’s a rhythm and timing to it. When it gets messed up, it ruins the intended effect.

Not that anyone in Baltimore cared… They were too busy yelling out for Pink Houses.

We were sitting in the upper tier, first row on the side, so we basically had to spend the night looking to our right to see the stage.

Unfortunately for Sweetpea, she was sitting next to a drunken spider monkey. The guy was leaning forward, leaning backward, standing up, sitting down, and thrashing about on his “air drums.”

No one else in the section was standing or dancing and given that he was in the front row, it’s not like he couldn’t see. It’s like I say in the Book of Bluz 3:24: “Whether it's at a ballgame, a concert, or whatnot, if you're the only one standing up, you're an asshole.  A complete, self-centered, self-absorbed, inconsiderate, flaming asshole.  Everyone else who bought a ticket didn't pay to see your back all night.” 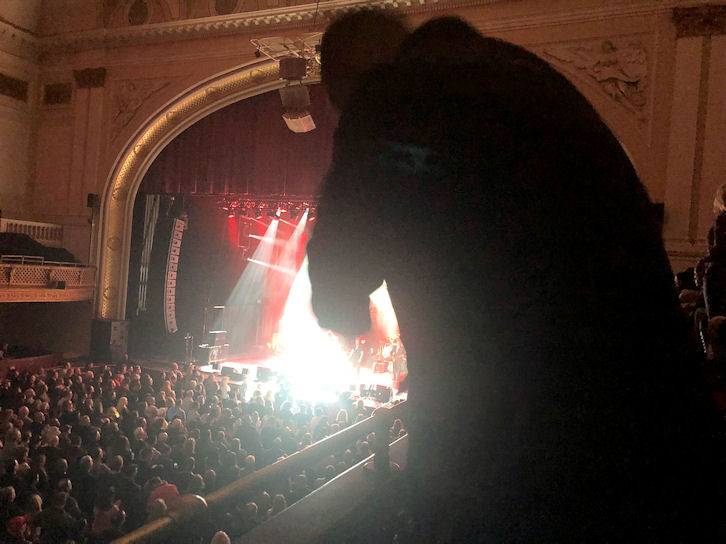 This was our view all night. Thanks, Asshole.

At least he took a couple of long trips to get more beer. We were hoping he’d get lost on the way back.
***

My working theory is that Baltimore is filled with the rudest, most self-involved people in the country. It’s not just this show that makes me think so, but two others of which I have first or second-hand knowledge.

Exhibit B
In 2014, I went to see comic folk singer, Todd Snider, play the Baltimore Soundstage, another small venue, like dinner theater without the dinner. I’d been looking forward to seeing this guy for years.

I wrote a more in-depth post about my experience, but in a nutshell, he had the same problem that Mellencamp had. But Snider was just a one-man act, with no band to help barrel through the noise.

A table up front kept calling out songs for him to play. He handled it deftly at first… “I appreciate the energy but I got this…”

Then he tried reasoning. “I can sit here and talk to you, but then I wouldn’t be able to play some of the songs you all came to hear me play.”

Shortly after that, ushers came down to remove some people from the front of the stage. Snider took a short break at that point, saying, “I can’t be a part of this…”

Even after that, people still didn’t get the message.

I had it on good authority (from a waitress) that he was going to play until 11:30 PM.  But around 10:25, he said, “This just isn’t working out very well, so I’ll just leave you with a couple more.” Which he did, and then left, with about an hour of music left unplayed and stories left untold.

I’d seen setlists from previous dates on the tour posted on Facebook. He only played about two-thirds of the songs on this night.

Now, should he have manned up and not been such a sensitive artiste? Hell yes. But how about if the crowd takes a freakin’ hint, shuts their yapping pie holes and just enjoys the show?

Exhibit C
My brother and his wife went to see James Taylor a couple years ago, in another small theater in town. Every time Taylor spoke to the crowd to tell stories or introduce a song, people in the crowd yelled out for what they wanted to hear.

My brother said he could see Taylor getting annoyed. Soon, he stopped trying to talk at all and just played the rest of his set, one after another, without further comment.

So, is it just Baltimore, is this going on at other venues across the country? Maybe it’s a local thing, or maybe it’s just a sign of a new era.

I’ve been to over a hundred concerts in my life, many at smaller venues. But until the Snider show, I’d never seen a crowd acting so rude. Usually, when a performer told a story, the place went silent, not wanting to miss a word. Now, no one seems to care about any words but their own.

Have you seen this behavior at small venues? Something to the point of distracting/upsetting/ interrupting the performer? People talking over the people they just paid $150 to listen to?

Is this a national thing, or just a sad symptom of “Charm City?”

Well charm city is not so charming when I've attended things there. But I am not so sure this is only in Charm City. I sadly think it's everywhere. It's a sign of the times to quote a 60's song. No one knows how to behave anymore. John's new music is the kind you sit and enjoy with a glass of wine - for me anyway. I like his new folk style. I've seen him in his rockin' days and I enjoy both. That would have angered me so much that I paid all this money and I have to deal with a drunken spider monkey and others yelling. Behave. Do we need to teach manners and appropriate behavior in public situations? Oh wait that orange cheeto in charge has blown all that out the window hadn't he?
I'm so sorry sweetie pie's concert was ruined. The Lyric Theater is a nice venue as well.

The assholeosity of some people is amazing. It's as if their conscious goal in life is to be the biggest turd in the punchbowl.

I've only been to one live music show in the last couple of decades, which was in Seattle. I didn't notice any noxious behavior, but the band was Celtic Thunder, which probably attracts an older crowd than some. And I had a seat near the front, so I didn't see anything going on further back. I've seen some crappy behavior in movie theaters, but I don't go to those very often either, and always the early shows when there aren't many people.

I think venues are going to need to get a lot more aggressive about removing characters like these. Otherwise people won't pay exorbitant ticket prices to see a show that's going to be spoiled anyway.

But I can assure you that the assholitude of drivers in downtown Portland is second to none. Crappy people are everywhere. It just manifests itself in different ways.

Most of the people there were our age, as you'd expect for an act who is this "seasoned." (The Squirrel Monkey was not.) I thought they should have known how to behave in public by now.

That's the thing! After spending $150 per ticket, why are you talking over the act you paid mightily to see? Makes no sense.

"Dude, no one thinks you're some kind of "super fan" for yelling out all these songs..."

The common element her is probably alcohol. Americans tend to not handle themselves well while drinking in public.

I'm sure alcohol plays a part in some of it. It definitely did with the Spider Monkey. He was loaded when he arrived and kept going back out for more. (Which at least gave us a break.)

But then, they had alcohol at concerts way back when, too. (Sometimes you brought your own, or loaded up pre-show.) I don't recall it being a problem at small intimate shows back then.

It's the same down here in the Rogue Valley - and they all drive monster pickups, which (of course) entitles them to drive as they please, no matter what.

Geez, don't even get me started on driving habits. People have zero regard for anyone else on the road.

In fact, just a couple minutes ago, I was at lunch and trying to leave a parking lot. There is one lane to go left and one lane to go right. Naturally, there was a giant SUV sitting there right on the line between the two lanes, with no blinker on. Eventually she turned left, meaning if she'd been in the proper lane, I could have slid by on the right and made my right turn without having to wait. This happens ALL THE TIME here.

Nothing more scary than being on the right hand side of a giant SUV or humongous dually pickup driven by a 5'0" woman.