I guess we all know the big news from the weekend, that the Current Occupant* staged a drone assassination of the top Iranian general. He had Iraq unknowingly lure him out into the open to do it. Now Iran’s mad and threatening retaliation, Iraq’s mad and is evicting all US forces, our allies are mad because they received no notice (except Israel), Congress is mad because they got no notice either, except for a few stray Republicans. Various rich Mir-A-Lago elbow rubbers got notice, though, of “something big about to happen.”

So, no one’s happy. Except, Vlad. He’s very happy because instability in the Middle East and among Western allies is good for Russia. Does Trump ever do anything that’s not good for Russia?

Trump was desperate to retaliate over the Embassy bombing, lest it is marked as “another Benghazi,” so he had his generals draw up some options. According to the New York Times, the option to drone-bomb the general was only included to make the other options look reasonable and measured. Naturally, that’s the one Trump went for; a truly disproportionate response.

Trump and his people say they have intel that there was a serious plan afoot and their action eliminated it. That’s intel from our intelligence agencies… the ones they’ve spent the last two years defaming as agents of the “Deep State.” So, in other words, they’re all wrong when they said that there are dangerous connections between Trump and Russia, and wrong when they found that Trump obstructed justice ten different times, but they totally nailed this Iranian plan.

Does anyone wonder how taking out a guy who thinks up a plan eliminates the execution of that plan? I’m pretty sure the dead general told somebody about his big plan. His being dead won’t stop jack shit.

In today’s society, Republicans are duty-bound to defend whatever dumbass decision the president* makes, so not only were the talking heads bobbing in agreement on Fox “News,” but the troll farms were working overtime to provide jingoistic memes and the ditto-heads military fetishists were busy sending them around. I culled a few out for inspection. 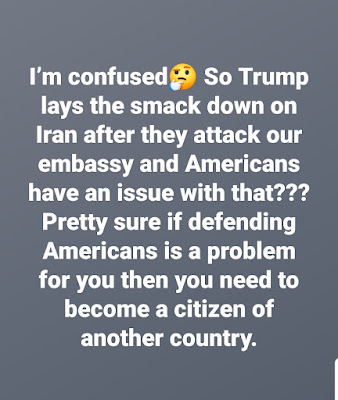 The issue is not that we “defended Americans” against Iran after the embassy bombing, but the way we did it. You can “defend Americans” with sanctions or a nuclear bomb. There’s a lot of room to maneuver in between.

We assassinated a military leader of a foreign country in a non-wartime period, on the soil of a third country, after using false pretenses to gain their assistance. There are United Nations rules against that sort of thing. And even if there weren’t, it was basically kicking a hornet’s nest, without a plan for the fallout. (Other than bomb them some more.) We made a martyr out of this guy and moved Iranian citizens from pursuing rebellion against their government to uniting and rallying against us!

Also note that you could say Obama was “defending Americans” with every foreign policy move, but that didn’t quell any of his critics on the right, whether he was sending troops or bringing them home.

This meme, as usual with this crowd, takes an element of Democratic thought, turns it sideways, and criticizes that as if it was something we believe. No wonder they're confused. 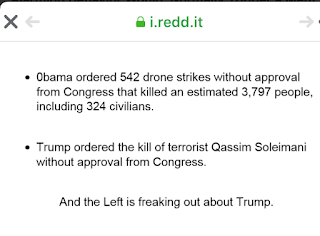 There’s a big difference between the two sets of actions. Obama was engaged in two wars, in Afghanistan and Iraq, both started by the previous Republican administration. The president doesn’t need Congressional approval to carry out any activity during a time of war. There was also the pursuit of ISIS, which was an extension of the previously sanctioned wars.

Trump’s assassination of the Iranian general did not take place in a time of war but appears to be the opening salvo of a new war, which indeed requires Congressional approval, or at minimum, notification. So yes, we Democrats do freak out about the president* unilaterally deciding to launch military action. As would Republicans if a Democrat did the same (or anything at all).

This meme is an apples to oranges comparison and cannot be taken seriously. 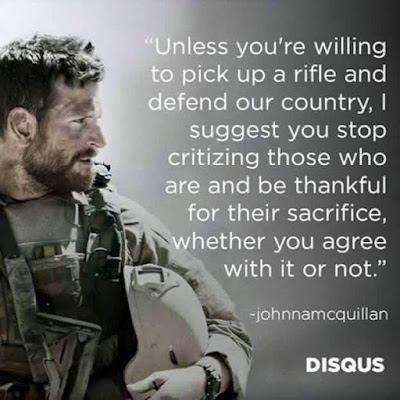 No one in their right mind is criticizing the soldiers called upon to execute military action in Iran (or Iraq, or wherever the hell they’re going.) And no one’s overlooking their service. But it’s easier to pretend that we are because then military fetishists can wrap themselves in the flag and pledge true love to the big guns of the US Military Services, which I’m sure gives them such a tingle way down in the nether regions.

What we DO criticize is sending our beloved troops into another war of choice meant solely as political gestures to save face and divert attention. People who really love the troops should balk at sending them back to the Middle East under such flimsy pretenses, at the behest of those who don’t know anything more about “service” than the number of pieces in a tea set.
Posted by bluzdude at 6:07 PM

We have been gone for a week with no news to speak of. Kind of good in a way. We return to all this. I must read more to learn more. But I am having a flashback of when W, Cheney and Rumsfeld all told the US that there was weapons of mass destructions that we all knew did not exists. They made this propaganda machine to get Americans behind them. Then everyone was stupidly shocked that they didn't find any. Oh please. How could they not know they were all lying for their agenda?
I am feeling like this is the same. if we aren't nuked soon then this helps the assholes reelection by the dumb asses who believe their propaganda. Okay now I will go read so I can be educated on this. Gee one week away from DC and all kinds of shit happened. Being in the bullseye as you are doesn't make us feel too safe right now.

There's no question in my mind he's lying about there being a direct threat, or anything else about the situation. The man couldn't tell the truth if his life depended on it. Not about little things and certainly not something like this.

Luckily for all concerned, the Iranian regime recognized this whole business for what it was -- a re-election campaign stunt and an attempted distraction from impeachment -- and de-escalated with a dummy rocket attack on a military base. It's bizarre that we have a president so deranged that the murderous Middle Eastern religious fanatics are the adult in the room, but there we are.

We're not out of the woods yet, though. There are militant Shiite groups in Iraq who aren't really under the control of Iran or of anyone else, and who might still do something that would allow Trump to re-ignite the conflict. One can only hope that he now realizes how bad this could have gotten and doesn't want to re-ignite it.

And of course the same Republicans who threw a fit when Obama saluted wrong or wore a tan suit are lining up to make excuses for Trump potentially putting military personnel at risk for domestic political reasons. Hypocrisy is just what they do.

I live in Red country, but the school at which I teach is filled with the poorer than poor kids, and I'm discovering that being screwed over at the lowest level does not make a MAGA fan make. It seems it's the lower and mid middle class that live him so much. Several of my kids have been talking about what an idiot he is, and how he's starting WWIII. Most kids mimic their parents' beliefs, at least at first, and it warms my heart that my own neighborhood (where my school is located) has some like-minded folks. Trump sucks, and there are some folks out there who feel that way besides us. :) Maybe West Virginia could be a Purple state after all.

That's a distinct possibility, if those who voted for him because he said he'd bring back coal jobs realized that's never going to happen, decide to vote in their own financial interest.

All he's done is give people someone else to shit on. If that's enough, by all means, continue voting Republican.

"No one in their right mind is criticizing the soldiers called upon to execute military action in Iran "
I am.
After WW II and the use of the nuremberg defense no ones guilty of any crimes if they can claim to be "just obeying orders" international and USCMJ were rewritten to include the DUTY of a member of the military to refuse to obey an illegal order.
This includes engaging in torture, wars of aggression, engaging in family/community reprisals etc.
Sounds like a check list of actions needed by our baby merc force for promotion.
If they get caught they fall back upon the nuremberg defense of "just obeying orders".
The military's outright and wholesale abdication of peronal responsibility and embracing the worst behavior of humanity brings shame upon the uniform, the flag and the country all behind the illegal excuse of "just obeying orders".
After the behavior of the baby merc's, we laughingly call a military, over the past several decades puts a lie to any illusion of an honorable member of the military.
A military is a regulated force that obeys the law. Merc's are just murders for pay.

As you bitch and type from your lazy-boy. You don’t know squat. If you’re under 40, why not stop by your local Guard recruiter and pick up a few brochures? Serious question. Why not?

Sorry, I'm long past that metric. Any maybe I don't know squat, but from what I can tell, neither do you. Or else you might have posted a serious comment showing where the analyses of these memes is wrong. Other than using hindsight, that is.