Jellyfish and a Case for Single Payer

I long for the days when I was indestructible. From ages 18 to 40, I almost never went to a doctor or got any kind of medical care whatsoever.

Then I hit 40 and the grand disintegration began. Turning 50 just hastened the onslaught. Heart problems, hives, torn shoulder ligaments, kidney stones; they all lined up to greet me. “Happy Birthday to you” and BAM, right over the cliff.

And now my eyes are giving me grief.

I started to notice something wrong in March when I went to get a new contact lens prescription. They said my prescription hadn’t changed, but I was having a hard time reading street signs. I toughed it out for a couple months until in October, I went back because something had to be wrong. I USED to be able to see with this lens strength, but not now.

My eye doc checked me again and came up with the same prescription. I said, “That can’t be right, because I can’t read a freakin’ street sign!”

She checked my eyes again with some new gear and then said the dreaded word… cataracts.

That’s why I couldn’t read street signs; the beginnings of cataracts were fogging up my view. She altered my prescription a bit and gave me a referral for an Eye Surgery outfit. I didn’t figure it to be an emergency. I could still get around, (as long as I’m not navigating alone to somewhere I’ve never been), so I figured I’d table any talk about cataract surgery until at least spring break, or the summer when Sweetpea is out of school and can shuttle me around to the appointments.

Then in mid-December, I started seeing things in my right eye. That got my attention quickly. Now, by “seeing things,” I don’t mean ghosts or evil specters (as long as Fox “News” wasn’t on TV), I mean I was seeing spots… or globs… something from which I couldn’t shake loose.

I immediately called for that referral but found that they couldn’t even see me until January 6th. That meant I’d have to make do over the holidays.

To be helpful, I thought I’d draw out what I was seeing. Here, you can see the progression. 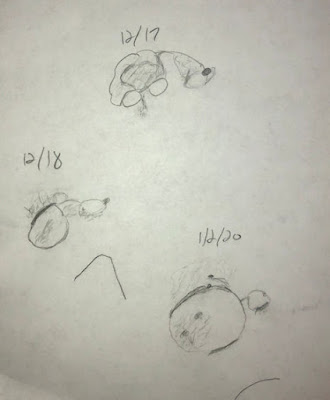 A sketch artist, I am not.

Eventually, I took to Web MD to look this up and found that I have a common occurrence called “floaters.” They said they take several forms:
They come in many different shapes:

I figure I have “rings,” with a side order of “cobwebs.” All that junk that’s attached to the large ring? When I look around, it sways, like a jellyfish in the current.

With great trepidation, I went off to my appointment last week. I went by myself. I knew they were going to dilate me but they also said driving yourself is optional. Some do, some don’t. I opted not to have to drag someone else to a three-hour appointment.

My trepidation was not only the drive but wondering what they were going to do to me. The idea of someone poking around in my eyeball with a needle or shooting laser beams into it totally skeeves me out, so believe me, I was fearing the worst. 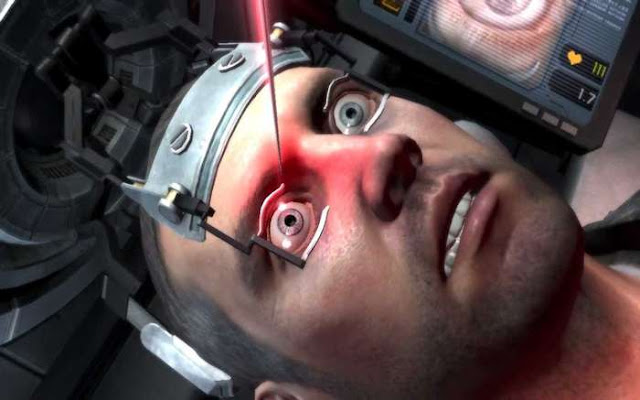 I saw several doctors and technicians there and after they got me dilated until I looked like Mexican child on a black velvet painting, they began peering in at the depths of my eye.

What they found was a “horseshoe retina peripheral tear.” It was located in the upper right portion of my eye and was probably what produced the floaters. The prognosis was for me to come back a few days later and have them seal it off with a laser.

But I put on my Big Boy Pants and went along with it. And while I was there, they talked to me about the cataract situation, which brings me to the broader point of the state of American health care.

The first surgery, I go in, lie down, the doctor works on me for about 10 minutes to break up the current lens, extract it, and insert a new one.

The second option, I get laser-guided prep first, to break up the lens while making smaller cuts in the eye. Produces less physical trauma to the eye and leaves the doctor with a 5-minute process to insert the lens. They said they would use this technique for every such surgery they do but for one problem: Insurance will only cover the first option.

As for the lenses, the first option is for a single-focus lens that will enable distance vision. I would need glasses or contacts to read a book, newspaper, computer monitor or phone. (Or in other words, about 85% of my waking hours.)

The second option is a multi-focal lens that would allow me to see distance plus anything around arm’s length away. Guess which one Insurance covers.

So, to get insurance coverage I need to choose a method that will cause more trauma to the eye, with higher risk, and put in a lens that will need nearly constant correction.

And I have the “good” employer-provided insurance coverage, the kind so many people are yelling about wanting to keep! Not me. Please, swap me out for a program that covers what I need, not what they consider the lowest, most basic level of treatment. I want a program where quality care isn’t trumped by cost savings. The bean-counters shouldn’t have such an outsized say in my medical care.

The person I spoke to wouldn’t engage regarding price. I wanted a ballpark… $2000? $5000? $10,000? Give me a clue, man! All he’d tell me is that they’d lay out all my options when it was time to address them. Naturally I imagine the worst. But I figure, if you’re going to get this kind of surgery done, it’s not worth skimping on results just so save a few (thousand) bucks. That’s my thought going in… we’ll see what I think when they lay out the prices and I can count up all the zeroes.

Anyway, I went in and got my laser repair done. It wasn’t nearly as traumatic as I’d imagined. They didn’t even strap my head down. I told the doctor I was surprised they didn’t have my head restrained. He was like, “Just don’t move your head.”

I was mostly afraid of a sudden sneeze and having my nose cut off, which would totally spite my face.

And there was no big Dr. Evil Death Ray machine; it was more like a little hand-held circular light that he’d hold right up by my eye. When he pressed a button, it got brighter, that was it. After a number of zaps in a row, I could feel a little ache in my eyeball, but nothing too harsh.

Good thing they told me I wouldn’t be able to see out of it for a few minutes. I’d been running around the office bumping into things and yelling, “What did you do to me! I’m BLIIIIIIIIIIIND!”

But not to worry, the vision cleared in a few minutes, like they said.

I was in far more danger just driving home after dilation. It wasn’t so much the brightness… they gave me these ridiculous wrap-around sunglass strips that you basically roll out around your face, and then put your eyeglasses overtop. I think they do that just to laugh behind your back once you walk out the door looking like such a dork.

Going home after my first appointment, my problem was my glasses, which have multi-focal lenses that make the world look like a giant fishbowl. I swear I saw a giant treasure chest full of bubbles in the median. Add the unnatural darkness of the face-wrap shades, which made the world turn a sickly shade of green, yellow and brown, like a tornado is coming, and it’s a wonder I didn’t kill myself just walking to the car.

After the surgery, the trip home wasn’t as bad. It was cloudy and later in the day, so I didn’t need the shades. But driving on an interstate in a fishbowl-mobile is not recommended for the faint of heart.

So, in the end, they repaired the retinal tear and so far there doesn’t seem to be any problems coming from that. I have to go back in a couple weeks for inspection and I suspect we’ll talk about cataract options then.

The bad news: they said there’s not much they can do about the floater and my brain would get used to it.

Great. From now on, everything I see looks like it’s from a monster movie… The Jellyfish That Ate Baltimore.
Posted by bluzdude at 7:17 PM