I do “Homeless Thoughts” posts when I have several ideas that are too short to make “Odd Bits” posts. Although we’ll see how this shakes out. Sometimes I’m not sure how things are going to shake out until I get to the end.

Rush to Judgement
The Senate Republicans mad dash to fill judicial seats with their own people makes perfect sense not just because they might only have the rest of this year to do so, but because it might ensure another four.

They may well need friendly judges in place when all the voter suppression, election-fixing charges, and recount requests get filed. They already have SCOTUS, but the top court may not even be brought to bear if all the lower courts find in favor of the suppressors.

From the “What Are They Thinking?” Dept.
When walking from my office to the subway last Monday, I saw that the Powers That Be installed a series of plastic posts along the main drag into Baltimore’s Harbor East office complex, to seal off a bike lane. 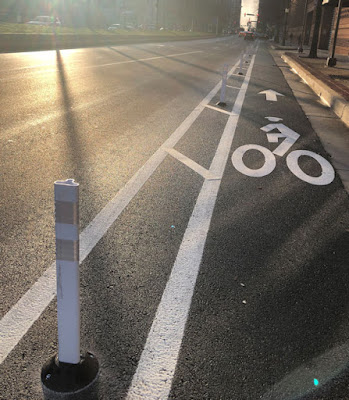 My first thought was that they’d have to be bendy, like ski slalom gates, or else they won’t last long around here. So I walked over to test one… nope, it was rigid, a piece of PVC stuck in a collar, somehow attached to the street. 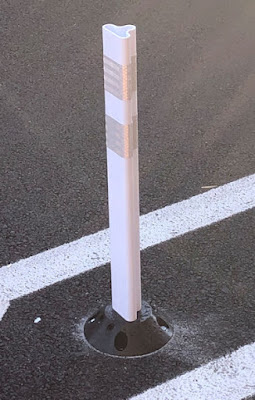 Are they freakin’ crazy? I don’t see how those are going to last a month. Some idiot who’s talking on the phone is bound to mow over a half dozen at a time. And the ones he misses, bored kids are going to knock over out of mischief or boredom.

Lo and behold, when I went back to work the next day, I could see it starting. 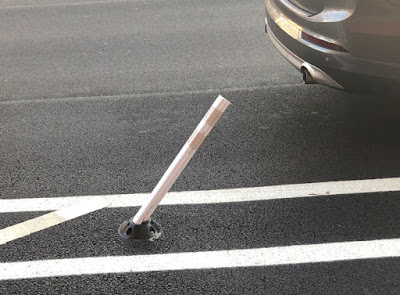 I hope they have someone on retainer to fix these, or else these things will soon be only a distant memory.

Memories… Like the [something, something] Moonlight
I have a list of ideas for this post jotted down on a pad by my computer. I made the notes last week, before Sweetpea and I had a little getaway. (More on that later).

So I come back to my desk, ready to write my post, I check the list, and the first Item I see says “Steamed Vajj.”

I have no idea what the hell I was talking about. I mean, I’m sure it had something to do with Gwyneth Paltrow’s new candle: 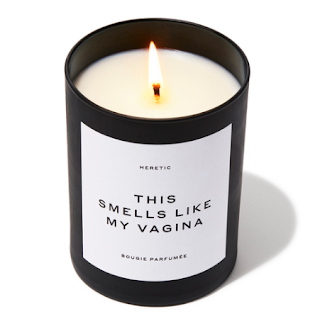 It must have been something I was enthusiastic about because it was the first item on the list, which meant it was the one that caused me to start the list in the first place. I must not have wanted to let that one get away. Alas, I should have added a little more detail.

I have the memory of a goldfish anymore. It’s probably time for me to start dipping my CBD gummies into a big jar of Gingko Biloba.

Royally Steamed
Not that it matters, but I totally support the Harry formerly known as Prince, for walking away from royal life. It’s easy for people to harrumph from the gallery but it must be a real burden to live under such a spotlight and microscope. I don’t blame Harry one bit for wanting to protect his family from the howling jackals who drove his mom to her death. Riches, fame, and royalty didn’t do HER much good.

If he wants to step out and become his own man, more power to him. It’s not like there was any real scenario where he was going to take the throne anyway. What was he in line, 6th? The only way he becomes king is if Trump tries to drone strike the Mayor of London and a bomb accidentally takes out all of London, including the royal family, and they have to bring him in from the Canadian bullpen.

Meet-A-Versary Weekend
To celebrate the day we met three years ago, and following day when we had our first date, Sweetpea and I decided to have a little stay-cation down in the ritzy part of town.

We stayed at a Hilton Garden Inn, at which we found an excellent rate. (Consider that the surrounding hotels, the Marriott Waterfront and the Four Seasons, want $320-$450 per night. No thanks!)

Our plan was to burn up some of the very generous gift cards we got as wedding presents. We had $200 for the rooftop restaurant at the Four Seasons, and $100 at Fleming’s Steakhouse.

For what it’s worth, we had a grand time. We had dinner at Flemings Saturday night, followed by brunch at the Four Seasons Sunday morning. It was quite a feast, in two parts. We didn’t even need to eat again on Sunday. (We did, but that’s beside the point. We didn’t have to. Just appetizers.)

Sunday afternoon, we saw "1917," which was a real masterpiece of film making. We totally recommend it.

But what I wanted to talk about was the hotel. As you may remember, this summer we stayed at a Hilton Garden Inn in Pittsburgh, and I was most unhappy with the design of the bathroom. I wondered if the design was institutional throughout the company and we’d have the same problems we had before.

I’m glad to say, they solved most of my issues in this location.

·        They had regular hinged doors to the bathroom.
·        The fixtures were not loose.
·        Water pressure in the shower was fine and the temperature got as hot as we wanted it.
·        They still had a large mirror opposite the glassed-in shower stall, but it was designed so that you were out of visual range when you were near the showerhead.
·        And even though the toilet faced the same mirror, you were again out of visual range, so you needn’t be tortured with the sight of the faces you make whilst trying to rock one out.

On the downside, they still didn’t have an exhaust fan. Yes, there was a continuous ventilation duct, and that was effective at air and mist filtration, but ignored the primary purpose of a hotel bathroom fan: sound cover. In the closed quarters of a hotel room, no one wants to hear what someone else is doing in there, and vice versa. Maybe if they had a switch to pipe in some traffic noise or something.

The other issue, and this was new, is that the shower stall leaked. There as about a half-inch gap on the hinge side of the door, which allowed water to escape onto the floor. And if the door wasn’t completely closed tight, water could get out the other side as well. There was no “latch” to seal the door, magnetic or otherwise.

You would think that the primary principle of designing a shower stall would be to keep the water inside. How can one intentionally leave a half-inch gap, right where the water bounces off you? Where’s Art Vandelay when you need him?

Do you know how I discovered this problem? I didn’t spot the water leaks when I was standing in there barefoot, getting dressed. That would have been too easy. It wasn’t until we were getting ready to go and I walked back in wearing dress socks and stepped into a big puddle.

Gah!  I hate that! So now it’s time to leave for the restaurant and I have soaking wet socks. (And it’s not like I had packed a whole rack of backup socks, either.)

But, Sweetpea came to the rescue before I could begin swearing in earnest. She said, “I’ll get the blow dryer.” 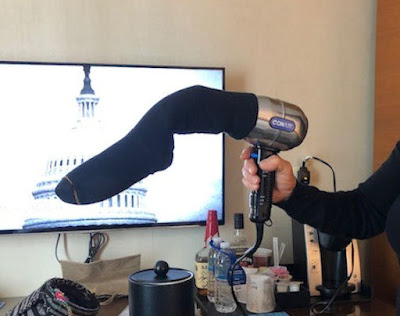 It kills me to say it, but I never would have thought of that. (Probably because I haven’t used a blow dryer in 40 years.) And as an even nicer benefit, it made the socks all warm and toasty. I decided I should blow dry my socks every winter day from now on.

So thank you, Sweetpea, for finding me, accepting me, loving me, marrying me, for richer and poorer, dry socks and wet. You’ll dry my socks, I’ll fold your underwear, and we’ll live happily ever after.

Sweetpea canmake a living writing lifehacks, and I totally love her brilliance.(lol) Nothing wrong with spending any 'versary' around the harbor at Flemings Restaurant and the Hilton, and so glad you had an awesome time with lots of good food. Glad you could get this all in BEFORE the Superbowl, right?(lol) I'm all in for the Chiefs this weekend. What about you? Let me just say that I adore how Gwyneth Paltrow isn't afraid to go there, and she's been pretty consistent with Goop since she started in 2008. Yes some of the stuff she talks about and does is pretty outrageous, but she's been successful. Do I want to smell someone else's vagina? Uh..no,not right now(lol) but mad props for your marketing and getting my attention. Hugs, RO

Yes, I'm rooting for the Chiefs. I do not want another team joining the Six Super Bowls Club, at least not until the Steelers have seven.

Gwyneth certainly seems to know how to generate publicity. She must have known a cootchie-scented candle would go off like a bomb. I wonder who did the product testing? Was someone running around the GOOP office going, "Wait, let me smell yours..."?

LOL!!! Totally love your sense of humor, and full disclosure, when I get around to my next blog post, that jar will be my lead in (lol), and of course I'll give you credit. I agree - hw in the heck was it tested?(lol) You know I'm a Dallas fan, but I know Theotis Brown, so I had to root for the Chiefs and Mahomes. That kid is just magnificent, and still young enough to enjoy the small things in life, which I can appreciate. What really bothers me is how people are downright vicious to his girlfriend who he's actually known since 11th grade. They accuse her of being a golddigger, ugly and worse on social media. Why should anyone even care who he is with? I don't get it. This is a woman who's successful and would continue to be so, even if she wasn't with him. Anywho, I was glad for the win, and I thank Gwyneth for creating cool stuff for me to talk about on my blog. Happy Wednesday! RO

How can she be a "gold digger" if she's been with him since before he was anybody? Good for him, for passing up all the road booty and remaining with someone who knows him best.

As for the naysayers... haters gonna hate. Screw'em. Go live it up and ignore the jealous trolls.