Brace yourself; this is going to be a weird one.  Today, we’re going to careen from Duck and Cover to the nation's economy to clown cars.

I’ve wanted to post this one thing for quite some time and today I was afforded an opportunity to have at it.
Cher, my close personal friend at Ask Cherlock, did a post yesterday about her husband telling their grandkids about the old Duck and Cover drills he used to have to do as a schoolboy.  This, of course, put me in mind of the Lewis Black standup bit he did in Black on Broadway:
Seriously, play this.  It’s just over 2 minutes… I’ll wait.  Definitely NSFW though.
Cher went on to mention how the NY Times had a story on how the Administration is working on presenting preparation plans for a possible nuclear attack.  She went on to wonder if there was something afoot on the global horizon… a legitimate threat from North Korea, perhaps?
I made a comment there that I will bring up here.
Sure, there may be something going on behind the scenes, but I think it’s more a case of exercising good business sense.  My current occupation is based on exactly such sense.
I work in what’s called “COB,” or “Continuity of Business.”  This is something that came to prominence in the wake of 9/11.  The government realized that in the face of national disaster, certain businesses needed the capacity to continue to function, primarily financial institutions, or else the entire economy could spiral down the tubes.  Hence, COB was born and in many cases, federally mandated.
The principles of COB are that businesses have contingency plans for multiple variations of disasters, like hurricanes, earthquakes, fires, blizzards, terrorist attacks, pandemic flu, water main breaks, chemical spills, etc.  Anything that could have a significant impact on the functioning of key businesses would be planned for.
Responses vary from leaving one’s primary office and relocating to a backup site, accessing one’s workstation remotely from an off-site PC, transferring one’s workload to an alternate office, and so forth.
To me, what the government is doing is just good sense.  Having a plan is never the wrong idea, regardless of how it may look from the outside.  NOT having a plan can be dangerous or even criminal.
(Don’t’ worry, the jokes are coming.)
To make sure a plan is solid, it has to be tested.  That’s why they have fire drills, or building evacuation drills.  You’ve probably done those yourself.  Should there be a fire or other toxic emergency in your building, you should know, not only how to get out, but also where to go and how to account for yourself and your fellow associates.
COB testing need not always be physical.  We also do what is called “Tabletop” testing.  That’s where key members of your work group get together and are given a scenario that plays out in stages, much like an actual emergency.
First, the event is described in the initial stage, like, “the building’s on fire… everybody out.”  So everyone discusses exactly what should happen… where to go, what to do, etc.  But at this stage, the complete scale of the event is unknown.
In the second stage, more details are given, like the extent of the damage and estimates on how long everyone might be displaces.  The group then considers their options regarding how to continue production… from home, a hot site, transferring work… and ensures they have specific plans on how to accomplish that.
In the last stage, the situation is resolved and the group considers how to put their pieces back together and reintegrate the work they did off site back into their normal systems.
OK, I didn’t tell you all this just to give you a bunch of useless information.
A couple years ago, when our company’s corporate office decreed that we all create these Tabletop Scenarios, the job fell to me.  I had to create a Tabletop testing process and procedure from the ground up.  I decided that I would write 10 different Scenarios so that I could rotate them among the different groups as the years went by.
I wrote the first couple pretty straight.  If you’ve read me for very long, I’m sure you know how hard that was for me.  Soon I began tossing some jokes in there every so often.  Like in the one about how the sprinklers were on all night:
*  On the bright side, plants that belong to people that don’t water them very often, look great.
See, it was nothing that would change the process or activity… just little throw-away lines.  I think it’s important to make things fun.  COB can be a very dry, serious affair.  A little levity can bring up people’s energy levels.
So, by the time I’d written about 7 of these Scenarios, I was starting to get punchy and was using more and more bizarre asides.  Like when due to a public workers strike that affected fire, police and transit workers, the city was beset by rival factions of rioting accountants and bankers, who did not disperse until they bussed in squads of jocks in letter jackets to restore order to the bean-counters run amok. 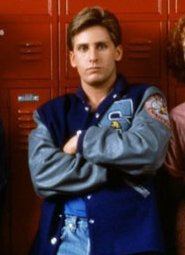 “Am I gonna have to crack some skulls?”
The strike was prolonged because the negotiators on one side clamped their hands over their ears and went “Nsaaa naaaa naaaa… I can’t hear you!”
In another Scenario, I had city engineers unable to stop a massive water main break when they tried stuffing the hole with bubble gum, which shot out of the hole and began to ensnare passing cars.
Still, the framework of the problems was there and the business still had to adapt their activities.  My little asides were just amusing decoration.
By Scenario Ten, I’d pretty much lost all my restraint and just let it rip.  It was my masterpiece.  I only used it on work groups that I knew had a solid sense of humor and could handle it.  But even so, I think I only sent it out maybe 3 times.
Then this year, Corporate sent out an online training course about how to construct Tabletop exercises.  I figured I’d better take it and see what it is they actually expected from us.
I was alarmed to learn that they frowned on “over-the-top,” Hollywood-style disaster movie scenarios.  So I had no choice but to retire Scenario Ten, or what came to be known as, the Circus Train Incident.
On the bright side, now that it’s out of circulation, there’s no reason why I can’t share it here.  Remember, this was given to actual business people to help test their recovery planning.
Note: All scenarios were sent out and approved by the higher-ups, which proved to me that they stopped reading them after the first couple.  It pays to pay attention!
Train Derailment
Part 1
* At 10:30 a.m., a train carrying numerous tanker-cars collided with another train, in the vicinity of your office building.
*An unidentified tanker car has exploded and is burning.  Other tanker cars have been punctured and are leaking their content, which is creating a chemical gas.  Some nearby cars contain propane, and efforts are being made to keep them cooled, to prevent more explosions.
* The other train was a circus train; elephants, lions, tigers, and other wild animals are running loose near the tracks.  A dozen clowns are trapped inside their little car.  Efforts are being made to locate the circus’s Vice President of Clowns, who has the only key.
* Police have ordered your Management to evacuate the building.  It is unknown how long the chaos will continue.
What do you do?
Part 2
* The fire is fought throughout the afternoon, and is brought under control; however there is a sizable cloud of what appears to be chlorine gas surrounding the site.
* The evacuated area is expected to remain sealed off for a day or two, as giant “Hollywood” wind machines are brought in to disperse the cloud.
* Gorillas have broken free, climbed to the tops of nearby buildings (including yours), and are swatting at news helicopters.  Bi-planes from nearby air-show are coming to help.  The clowns are still stuck, but are living on a stash of cream pies.
What do you do?
Part 3
* On the 3rd day, the fire has been put out, and the gas cloud dispersed.  The tracks remain closed, but the evacuation orders are canceled.
*The animals have been rounded up and trucked on to the next big-top event.  The VP of Clowns has been contacted and the key obtained, but the clowns didn’t make it.  No one is too broken up about it.
*At 3:30 pm, Management emerges from their bunker and contacts you with the all-clear message.
* Your facilities will be reopened within the hour, although a number of large, long limbed chalk outlines will need to be hosed off from the sidewalk in front of your building.
What do you do to restore your business?
It’s a wonder I still have a job.
Posted by bluzdude at 1:50 PM