Against my better judgment, I’ve been watching “Celebrity Apprentice” this season.  After last season, I told myself, “Enough of this silliness.”

When they announced this season’s slate of semi-famous and near greats, I was singularly unimpressed.  That is, until I got to two names: Marlee Matlin and Meat Loaf.

First off, I think Marlee Matlin is adorable, so that much was known.  Then last week on the Comedy Central Roast of Donald Trump, she killed!  She really showed off wicked sense of humor, even before Gilbert Gottfried came out to act as her translator. 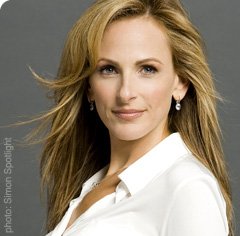 Gorgeous, funny, and she rarely speaks… I dare say; she’s the perfect package!

But I digress.  Mostly, I had to watch the show to see Meat Loaf.  He’s come up a couple of posts of mine before… One was about when I met him in 1994, and the other about how his music is my good luck charm for bad weather driving. 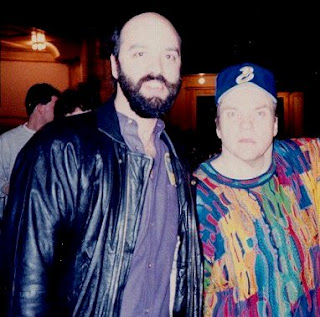 Meat Loaf is my nominee for Greatest Rock Singer Ever.  Geez, I must have worn out 2 or 3 copies of the Bat Out of Hell cassette over the years.  When I was driving to and from college and the weather turned bad, I used to think, “If I’m going to kill myself smashing up this car, I at least want to go out to some great music.”  Could there possibly be better car crash music than the song “Bat Out of Hell?”

Anyway, when the snow fell, I’d crank up the Bat and somehow I’d always make it home.  I soon began to consider that tape to be my good luck charm.  I knew The Loaf would get me home.

If I had to pick one album as my all time favorite, this is it.  “Bat Out of Hell” is practically perfect.  It’s got brain-stinging guitar, flawless harmonies, wicked lyrics and a sly sense of humor, hooks a mile wide and a complete wall of sound.  The Loaf has a voice that can both blow apart a cinderblock or tickle you under the chin like a feather.  When he brings a song to a climax, you feel the earth move.

I first obtained the LP when I joined Columbia Record Club, back in the late 70s.  I got it primarily for “Two Out of Three Ain’t Bad,” and “Paradise By the Dashboard Lights,” or “that one with the baseball rap” as I knew it then.  I didn’t know anything else on the album.

My buddy Brill told me to listen to the title track.  I saw that it ran over 9 minutes, so I told him, “Eh, that’s just another one of those long-ass songs you like.”  I was more partial to “3-minutes and out,” myself.  (In music… don’t be a wise-ass.)

I put the needle down, lay down on the floor with the lyric on the inner sleeve, and soaked it all in.  It damn near fried my brain right there.  It had power and fury, desperation and escape, living fast and dying too young.  It was a masterpiece.  And the end… holy shit, on that last “Like a bat out of HEEEEEEEEEEEEEEEEELLLLLLLLLL,” he hits that note so freakin’ hard, and just holds it longer than any human should be able to do.  That was a life-changing event for me, right there.

So I was rolling toward the subway station this morning when “Two Out of Three Ain’t Bad” came on my MP3 player.  It occurred to me that I have 7 different versions of that song, each with its own strong points.

Dub from a bootleg album from the 11th show of his first tour: Not nearly as polished as his later performances, but incredibly heart-felt.

Live from Wembley: from “Blind Before I Stop” tour in the mid-80s.  I saw this tour in Cleveland.  This is probably my favorite version, purely on the basis of the backup vocals.  He had these two blond sisters, Amy and Elaine Goff, singing with him and their voices just soared.

Live Around the World: From Bat Out of Hell 2 tour.  Big production.

Live with the Melbourne Symphony Orchestra: Full orchestral treatment!  Love this one.

Extra Track on his latest disc, “Hang Tough Teddy Bear.”  On the intro, he says he’d stopped playing this live, but would play it for them that night.  If I ever went to see a Meat Loaf show and he didn’t play 2 Out of 3, I’d be severely pissed off.

And this all doesn’t include the horrible Bonnie Tyler, disco version.

To see Meat Loaf in concert is like going to a rock opera.  Everything is over the top, and often times, acted out like a stage play.  When I saw him in Boston doing small warm-up shows before his Bat Out of Hell 2 tour, he did this thing where he got the audience to do this whole call and response bit, with out speaking a single word.  He just used gestures and facial expressions to communicate and it worked like a charm.  That was when I realized why he’s been so popular all over the world.  No language barrier.

I saw an interview he did back in the 80s, on a talk show that comedian David Brenner had, and was talking about an album he recorded in Germany.  Brenner asked him, “What did they call you in Germany, ‘Herr Loaf?”

He answered, “They mostly called me MEEEEAT!  Like, ‘You vill sing now MEEEEEAT!’”

Special Music Geek Note: His name is properly spelled, Meat Loaf, as a first and last name, rather than one name: “Meatloaf.”  Most music stores file his stuff under M, which is the one big exception to the traditional rules of filing by last name when it’s a real person.  There is no person named “Jethro Tull” or “Pink Floyd,” so they are filed respectively under “J” and “P”.  Meat Loaf should be filed under “L,” but is not.

Anyway, the promos for Celebrity Apprentice have been showing over and over, this blowup between Meat Loaf and Gary Busey, where Meat threatens to put him in the hospital in 4 minutes.

So far, I’ve seen none of that.  Meat has been extremely patient and understanding with the insanity that is Gary Busey.  He’s talked to him calmly, tried to smooth over hurt feelings, and even apologized when he clearly wasn’t wrong.  Obviously, The Loaf will run out of patience at some point later this season.

So, what does all this Meat Loaf information have to do with anything?

Well, nothing.  But when you’re scratching for a blog topic that you feel like writing about and your favorite version of “Two Out of Three” comes on the headphones, sometimes inspiration just strikes.

PS. Bonus points for knowing the source of the title.
Posted by bluzdude at 10:41 PM