I love Mondays… best TV night of the week:

But I remain troubled and wracked with guilt and it’s all Jack Bauer’s fault.

Jack Bauer is the protagonist of the Fox Network’s show, “24”, the most exciting drama series I’ve ever watched. He plays a cool-under-fire and indestructible counter-terrorist agent. Each season is one day in real time… 24 episodes depicting 24 hours, and at the end of every episode, there’s always catastrophe just about to erupt in the next hour.

So why do I feel guilty? (Besides the fact that it’s on Fox?)

Those that know me or have read enough of my ramblings know that I’m pretty much a straight ACLU lefty. Jack Bauer spends 60 minutes each week blowing up the Bill of Rights and our Constitution, right along with all the bad guys. Each season you can count on old Jack torturing vital information out of someone… terrorists, unwitting civilians, corrupt government officials… whoever. Then there is the illegal detention, warrantless search and seizure, wanton destruction of public and private property, car theft or car jacking; all in a day’s work. All stuff that people like me go ballistic over when we see it in the news. But you should hear me curse at the TV over characters that try to get in Jack’s way.

Here’s how I manage to live with myself and still get a good night’s sleep: for starters, it’s FICTION. But, beyond that, and beyond the implausibility of so much of the plot, in the realm of the story, we know who the bad guys are and what they’re going to do. And if the last 7 seasons has taught us anything, it’s that Jack is always right. If everyone would just get out of Jack’s way and do what he says, they would call the show “3”, because that’s how many hours it would take Jack to figure out the plot, stop the bomb and kill the bad guys. Also, we know what’s at stake if some evil stooge doesn’t spill the info to Jack… things go boom and lots of people die. Simple cause and effect… if only real life were that cut and dried.

On the bright side, 24 has made me a more effective football fan.

Yes, really. I’ve noticed that when I go to Steelers games, especially in Pittsburgh, I burn out my voice by halftime. If the game is close late, like they always seem to be in the last few years, I’ve got nothing left by the 4th quarter and sound like I’m careening through puberty. So where does 24 come in?

It comes down to Kiefer Sutherland. His Jack Bauer has two basic modes: 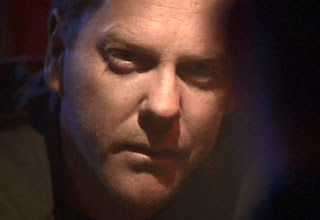 “We’re running out of time… Tell me where the bomb is.”

He half-whispers this like he’s reading a children’s story or doing voiceover for his Ford commercials. 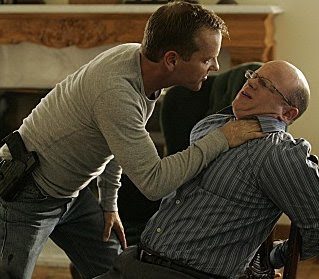 
“TELL ME WHERE THE BOMB IS!!”
This is brought up from the diaphragm, bellowed as if from the hounds of hell and delivered about two inches from some guy’s face.

This is what gave me my ballgame inspiration. Instead of hollering high from the throat, I found the way to bring it up low from the diaphragm. Sounds more like a drill sergeant than Junior High-schooler and is much easier on the old vocal cords. So now it’s not just me yelling for my Steelers, I’m channeling Jack Bauer. The teams know better than to disobey. 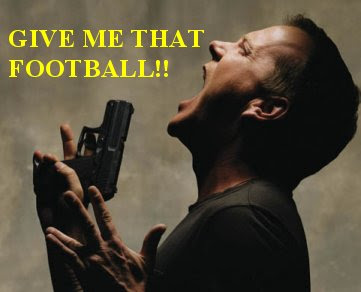 Ha! I have been blogging for five years, and I still don't think mine is that good. I hope my writing has at least improved, but I do wish I could be more entertaining (well, when that is what I am going for!). And although I don't care a lot about people commenting, it frustrates me at times that I may get dozens of hits a day (when I post), and yet so few people comment. I would love to know what at least a few more people are thinking. Hate to think I just have a bunch of stalkers!

I watched Heroes at the beginning. Great show (save the cheerleader, save the world), but then it lost its way, and I got confused/annoyed and bailed before it ended.

I think I had a dream last night with Jack Bauer in it, thanks to reading these posts. Not that I am complaining!

As you probably know, I track my hits obsessively, but it’s the comments that I really trust to let me know if a post is any good or not, or if anyone is paying attention. So many hits are from picture scavengers, (which I can tell from my StatCounter service), it’s hard to place any weight in hit totals.

I watched every season of Heroes, and I agree… it started strong but went downhill. Funny, I just bought the first two seasons of Heroes, on sale at Target for $9.99 each. I’m curious to see how well it “keeps,” given that all the secrets won’t be quite so secret in a second viewing. But on the other hand, my mind for plot details is like a sieve. I tend to enjoy a show at the time, then let all the details drift away almost immediately.

For your sake, I hope your dream featured Easy Jack rather than Hard Jack.