Back to the Burgh

Time now for my second trip to Pittsburgh in as many weeks, for another cousin’s wedding. The wedding was on Sunday, but on Saturday night, we were going to see the Penguins game.

This time, I would not be traveling alone. My girlfriend (aka Pinky or Little Red) was coming with me. This is a picture of her sunbathing, earlier this year, at my parents’ place in Pensacola, Florida. I call this shot, “How Redheads Tan.” 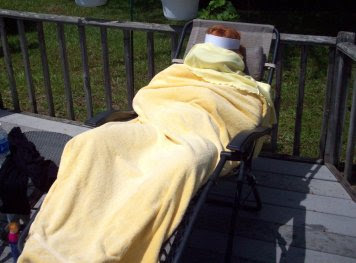 Saturday was a really crappy day for a drive. It rained from the time I left Baltimore until we were past Breezewood. Then it merely drizzled the rest of the way. We were staying at the brand new Fairfield Inn on Neville Island.

When I mentioned to Pinky that we were staying on Neville Island, she asked me if it was some kind of resort. (Pausing now for my Pittsburgh friends to stop laughing.) For those unfamiliar with that little corner of Western Pennsylvania, here’s a shot of some of the beautiful scenery for which Neville Island is known: 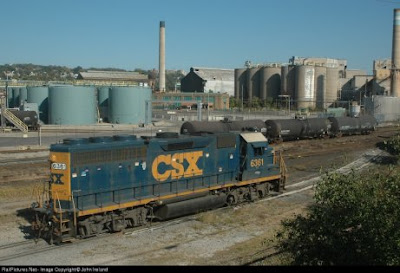 About 20 miles from Breezewood, we came to a complete stop on I-70. Uh-oh… that’s never good. Judging from the ambulances I spotted heading the other way and the utter lack of movement, I’d say there was an accident.

After about 15 minutes of sitting there, I got out of the car to walk up and see what was going on. Naturally, the cars began moving at that very moment. Yes, there was indeed an accident… there were about 3 cars smashed up. You know, at the speeds we all drive, it’s a wonder that there aren’t more of them. It’s really just a matter of blind trust that we manage to operate our vehicles at such speeds, mere feet from one another, without bumping.

We stopped at Wendy’s again to enjoy lunch and a little rest. I know it was a gamble whether to eat or not, given how we usually get forcibly fed once we hit my relative’s house. But I was unsure of the plan and there was a good chance that I wouldn’t be getting together with anyone until late in the day.

We got to the Fairfield Inn without any trouble. I was especially impressed by their helpful concierge. 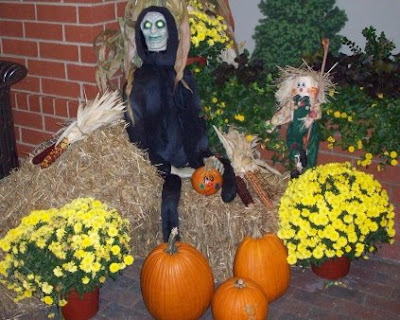 I talked to my dad and received the plan. We were meeting for dinner before going to the game. Where? 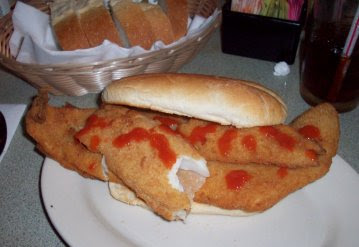 We were going to meet up with the family for fish sandwiches and whatnot. I packed up my Pens game mojo and we lit out for Segnari’s in Coraopolis. But wait…

Before we even got out of the parking lot I had to turn around and go back. The Pens were wearing their powder blues tonight, and I did have my blue Pens hat on. But it was my “Three-Time Stanley Cup Champions” hat I had been wearing during the drive out. That breaks my mojo rule about sporting championship gear to a game. I packed a plain blue Pens hat with the old logo to wear to the game.

On my way back up to the room, I noticed a bus full of Steelers fans disembarking. I went up the elevator with some of them and I asked where they were coming from. They said they were from Albany NY.

So, back to the car and away to Segnari’s we went. Hugs were shared, beers drank and fish sandwiches inhaled. After dinner, my mom, dad, brother and I headed for the Igloo.

We were in section C30, under the deck about 3 rows from the back. We could see all of the ice, but not the scoreboard. This was our view: 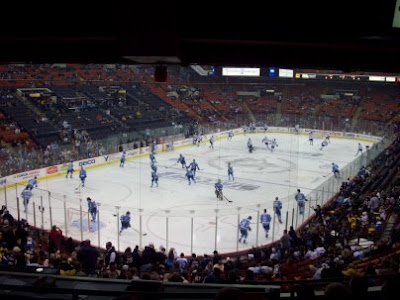 The zoom helped pull the shots closer, so that you didn’t see the deck above us. 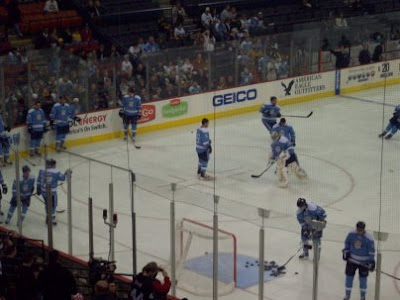 For the past couple of years, I’ve read the Pittsburgh Post Gazette’s outstanding “
Empty Netters” blog, written by Seth Rorabaugh. We’d corresponded enough over that time that we were familiar with each other, so I’d dropped Seth a note earlier in the week, to see if we could get together before the game. Seth was gracious enough to agree, so I texted him once we got settled.

Ten minutes later, there he was, having come from the other side of the arena. I was happy to be able to introduce him to my dad, but unfortunately, we didn’t get to talk for more than a minute or so, as people were trying to get around to their seats and Seth had some pressing issues to attend to… little things like having to haul ass back to the press box and live-blog the game. But it was great to get to finally meet up. It’s a testament to him that he even bothered to come down to mix with the riff-raff.

The game itself was great. The Penguins dominated early and the outcome was never really in doubt. That means my Pensblog.com mojo is 1-0. (at least when the Pens wear blue)
OK, here are a couple shots, just because what else am I going to do with them? 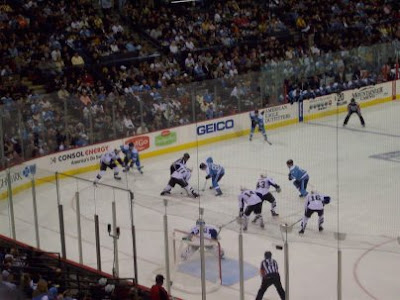 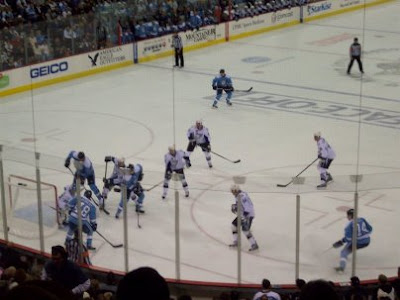 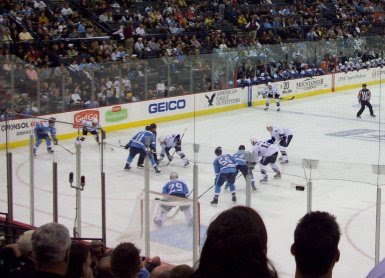 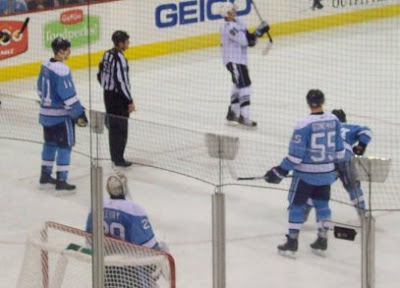 Yes, I know these aren't that great, but I posted my most meaningful shot in the last entry. (Dupuis in the process of deflecting a Gonchar shot into the net.)
We got out of Dodge easily enough and I was back at the Fairfield by 10:30. I knew Pinky would be asleep in the room, so I was kind of inclined to linger in the lounge and watch the end of the Yankees/Angels game, maybe with something cold and foamy in my hand. Didn’t know where I was going to get any beer though… the Fairfield doesn’t have a bar. So I walked in and there were some of the Albany people sitting around watching the game. I noticed that they all had 6-pack containers with them. I asked someone, “Um, were did you get that sixer?”

They said, “At the King’s Restaurant, right out front.”

Picked me up a half dozen IC Lights (don’t laugh… I like it and you can’t get it in Baltimore) and went back to the lounge. I spent the rest of the night talking Pittsburgh sports with the displaced Burghers from Albany and catching up on some of the news from another of my “old neighborhoods.”

I always forget that it’s not a good idea to drink a bunch of beer immediately before bed. Someday I’ll learn. It was kind of an up and down night, but a very good day.
Next: Brief recap and mojo results for a 4-day old Steelers game.
Posted by bluzdude at 7:43 PM