One of the benefits of visiting Pittsburgh is having access to lots of fresh Steelers and Penguins gear that does not appear on the major NFL and NHL apparel sites. My aunt just so happens to live near the K-Mart in Moon Twp., so Sunday morning before the games began, I set sail for K-Mart to pillage and plunder some local swag.

I went through there like Rodney went through the Pro Shop in Caddyshack: “I’ll take one of those and two of these, gimme a box of those and some of these…” I got Christmas presents for 4 relatives taken care of, plus a plethora of stuff for ME. Gotta strike while the iron is hot, no? There was a lot of Steelers stuff, but not so much Pens stuff this time.

My favorite finds were the Steelers and Pens garden gnomes. 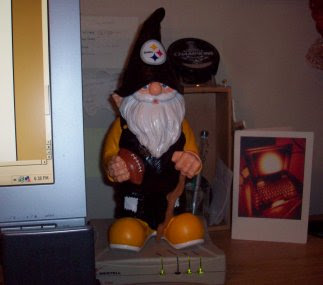 I always wanted those, even though I don’t even have a garden. Maybe I’ll let them stand watch over my computer desk. I’m also interested in testing their mojo qualities… perhaps posting the applicable one by the TV during the game. Call it my gnome field advantage… 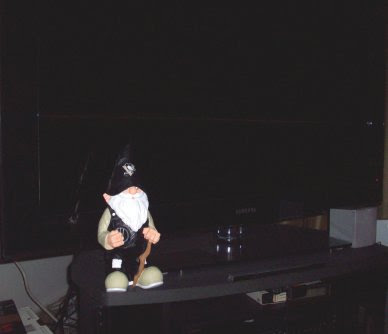 The early game was great… we got to watch the Ratbirds lose in excruciating fashion to the Patriots, all the while feasting on copious amounts of pasta, meatballs, pork loin, grilled chicken, salad… No need for getting anything to eat at the stadium this evening. What a feast! But that’s the norm with my family. All we do when we get together is eat, drink and watch sports. And I’m OK with that!

Did you ever notice that you can’t win when you eat at an Italian household? If there’s any food left over, you didn’t like it. If nothing’s left over, they didn’t make enough.

In a side note, you should have heard all the crying in the Baltimore media about the officiating. Never fails… every single time the Ratbirds lose, everyone blames the refs. Or the team beat themselves. I’ve lived here 11 years… the Ratbirds have never been beaten. They’ve either beaten themselves, or the refs stole the game. No one has ever once admitted that their team just wasn’t good enough on that day. Whining maggots… but I digress.

My brother, my dad and I left for Heinz Field about 5:30, got down to the North Shore and began trolling for a place to park. We seemed to get caught in a loop where there was no place to go but the casino parking garage. After some debate, we decided to give it a shot. Once inside, we learned about the deals inside… if you signed up for a gambling card, they’d give you $10 in credit to play the slots. If you had a Steelers ticket in hand, that was good for another $10. You just had to put in some of your own money too and play a little bit. If you did, the parking was free. (It was $20 otherwise.) It sounded like a good deal to us. Only problem was the long line to apply for the cards. As we were about 2 hours early, we waited it out. As we waited, I really wished I hadn’t yet applied all my layers of mojo-laden clothing. It was getting a little toasty in there.

Eventually, we got hooked up with the cards and a sheet of instructions to get the credits loaded. We each sat down at a slots machine.

You know, each of us are relatively intelligent, college-educated fellows. You’d think at least one of us could figure how the hell to operate a freakin’ slot machine. Eventually a very nice Casino Lady came over and said, “Since I see you all standing here with anguished looks on your faces and mouths hanging open, I figured you were too stupid to follow those simple instructions in your hands, so I’m offering to help this new casino separate you from some of that hard-earned cash that you somehow managed to acquire.”

She said, “Of course,” but what she really meant was, “Oh my God, didn’t you just watch what I did before? OK, come over here, if you can still walk upright that is, and sit down at this machine that both Dan Quayle and Sarah Palin could play when they were 4. If their principles permitted such a thing…”

So I got even with her secretly critical ass by hitting for about $65 right off the bat. Wow, gambling is easy! I fiddled around a little more until I expertly whittled my total down to $41 and cashed out. They sure make it easy to forget that you’re really flushing your money away.

The last time I played slots, (ages ago) you had to keep plugging quarters into the machines. It made you keenly aware that your money was rapidly disappearing. Now you just have credits on the machines and the temptation is to just keep pushing that button to watch the wheels spin.

Anyway, I decided to bail while I still had some beer money. Thank you, River's Edge Casino!

We went over to the stadium and still had over an hour before kickoff. We came in down by the scoreboard and saw the NBC announcers, Chris Collinsworth and Bob Costas, doing their thing under the TV lights. 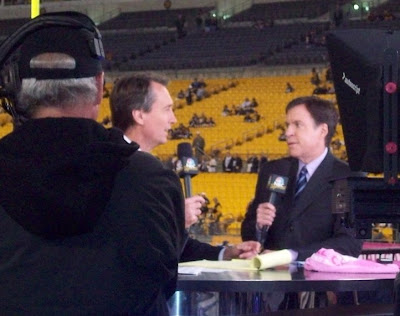 Do you think Al Michaels knew he was about to get his ass felt up? 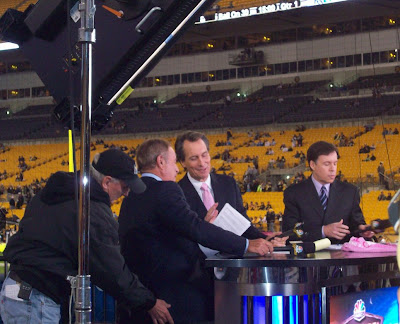 Our seats were in the upper deck, section 537, 14 rows up, about the 20 yard line towards the scoreboard. I always try to stop on the way up, to get some shots of the city. I just love the cityscape. 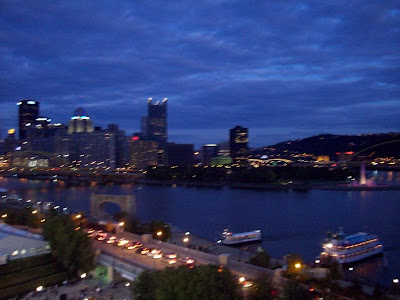 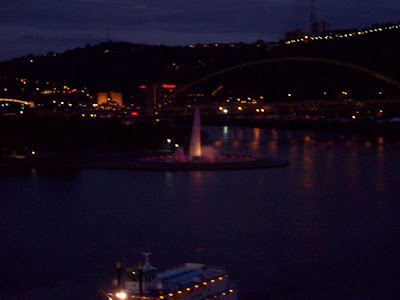 For a change, we actually had seats on the TV side, so when you watch the replays, the action is going the same way. 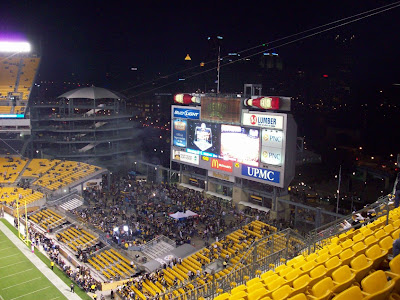 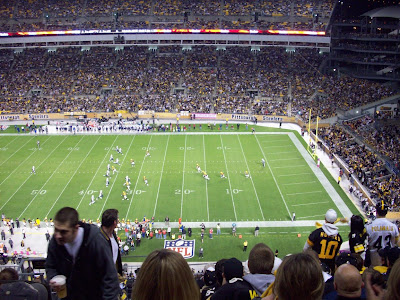 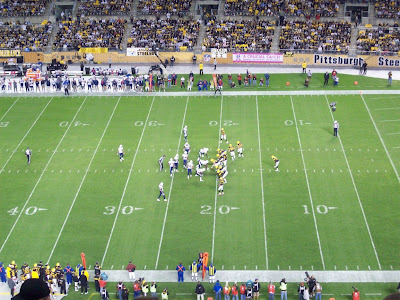 You know, you have to love how many people wear Steelers gear to the games... everyone, I think. I don't think I saw a single person that didn't have something on. And such variety! It was almost like snowflakes. No two people had the same stuff. Especially one guy that had Steelers camouflage pants, Steelers camouflage hat, and a Steelers camoflage jersey. In fact you couldn't even see him coming up the aisle... just a pair of disembodied eyeballs.


Now, on to the game. I didn’t take notes, so my impressions will be brief. Besides, it’s Wednesday now, and everyone knows what happened.

* It was good to see Ben come out sharp and the ground game working. Nothing like getting 7 on the opening drive.

* I know I said it before, but Heath Miller is money. Always open, always catches the ball. The big man owns the middle of the field.

* Welcome to the NFL, Rashard Mendenhall. Not that I think Willie wouldn’t have done well this night. The O-line was opening holes Fat Albert could have run through. But it was nice to see the kid run with some power and authority, and knock some people around.

* Unbelievable first half of football and a 21-0 lead. No complaints at all. Nice finally see a game that I don’t have to chew my fingernails to the nub. Plus, it’s a beautiful night for football. Slight chill in the air, little wind… Football weather!

* In the 3rd quarter, we come to my favorite moment of every Heinz Field game:

I shot this myself. I did one last year too, but I was in the upper deck of the opposite end zone, so the highlights were hard to see. I just love how everyone goes ape-shit over the video. It gets everyone so charged up that the poor Chargers really had no chance on that series.

* When Mewelde Moore threw that pass to Heath for the TD making it 35-14, we decided to call it a night. Normally, I love to stay to the bitter end, but having parked in a parking garage, we weren’t sure how bad it would be trying to get out. So we opted for the guaranteed clear shot out, given that this game was in the bag.

* By the time we got back through the casino, into the car and got the radio on, we learned that the Chargers had scored twice and it was now 35-28. WTF?? How the hell did THAT happen. Geez, I turn my back one time, and the toddler is knee deep in the toilet bowl. Remember how I said I was going to go and personally oversee this game to be sure things were done right? I guess I should have stuck to my word. As soon as I leave, all hell breaks loose.

* We paid very close attention to the radio as we drove home and were very happy to see that the Steelers came out and kept the hammer down. I hate when they go all conservative and run into the line 3 times and punt. This time, Ben kept attacking until they got into Skippy’s range. He knocked it through, thus guaranteeing himself a fresh supply of sluts for the night.

* James Harrison knows how to close things out. Actually, he came close to closing Phillip Rivers out, as he came barreling around the end to bury his helmet between Rivers’ shoulder blades and cause a fumble. Game over. Phew.

We pulled up to my aunt’s house just as the game ended. Inside, it was like, “well, they won’t be back for at least another hour. (blink) What the hell are you guys doing here?”

It’s nice to come home from the game and get to see all the highlights for the rest of the night. I am so jealous of Steeler fans still living in Pittsburgh. Until I have to drive somewhere, that is.

The next day, before hitting the road for our homes, we assembled for lunch at our favorite local place,
Segnari’s, in Coraopolis

. It’s not a trip home without a Segnari’s fish sandwich. 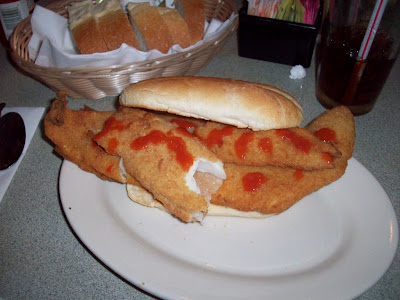 That’s another ‘Burgh thing. You order a fish sandwich in or around Pittsburgh, you get a huge hunk of fish hanging over the bun, plus at least another half a piece on top of that. Anywhere else; not so much. 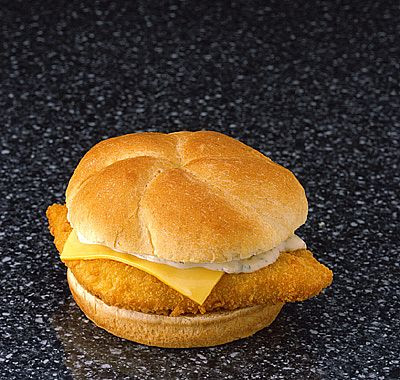 So that was the trip. Made it home uneventfully, avoided The Rocks and avoided the cops. In two weeks, I’m going back again for another wedding. This time, it’s a Sunday wedding and we’re seeing the Penguins on the preceding Saturday night. Let’s go Pens! 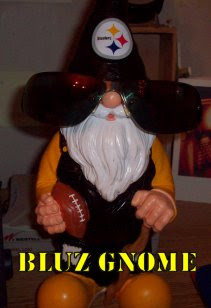