Like I mentioned on the last “wedding” post, I realize that a bunch of crap about someone else’s wedding is usually sleep inducing. I will try to keep this limited to some fun stories about the occasion

I started off pissed at myself. I forgot to bring my dress shoes home from work. I keep them at work so that I’m not slogging through rain, snow and slush in them, so that they stay new-looking longer. The down side is that I have to remember to bring them home when I have a rare “dress-up” occasion. So I failed miserably here.

I went into my closet and found an old pair of cordovan loafers. (Cordovan = a dark maroon/brown color) I was planning to wear my charcoal suit and a dark red shirt anyway, so some of the damage was mitigated. As this was to be a “casual dress” wedding, I considered wearing my sneakers. The problem is; the definition of “casual” can vary greatly. I did not want to call attention to myself by wearing my blindingly white sneaks, while everyone else was looking all dapper and debonair. I also considered just bringing them in the car, so once I had a look around to check the prevailing trends, I could bust out the comfy shoes. In the end, I decided against it all and just went with the cordovans.

So as we got out of the car and approached the wedding place, I caught a look at all the groomsmen gathered outside the door. Then I saw what they were all wearing: 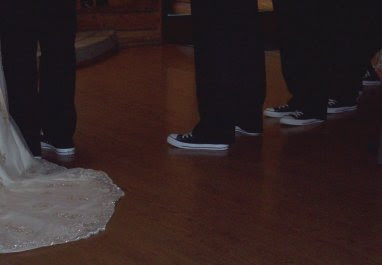 Chuck Taylor high-top sneakers… all of them, groom included were wearing flippin’ Chucks. I came thiiiiiis close to going back for my sneaks…

I have to say that my cousin and his new wife are very cool people and their wedding fit them. They have a son together that’s about one and a half. Her father was the chuch official. They had a string trio playing the wedding music, and the bride walked in to the theme from “Juno.” (Pinky pointed this out to me or I would have completely missed it.) 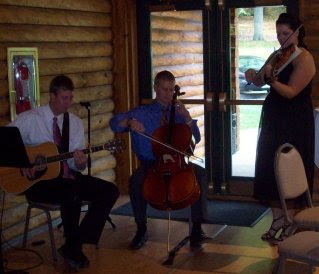 The ceremony was just how I like them… short! Just long enough to make it a meaningful event, but not so long that you’re just dying to get it over with. It was kind of funny though, when you have one guy giving the bride away, AND performing the ceremony.

I loved the wedding cake topper. Remember when I explained how my family takes their sports very seriously? Behold: 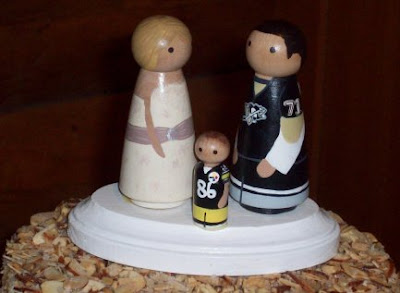 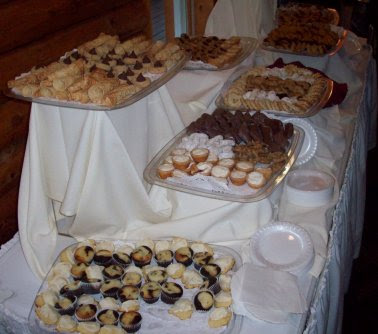 During dinner, Pinky and I sat with my brother, a cousin and his wife, and my second-cousin and his wife. Over dinner we talked a bit about their wedding, which took place way back when my brother and I were boys. I prodded my brother to tell a favorite story from that occasion, when the second-cousin was trying to get my brother, who was about 9 at the time, to dance with a little girl at the wedding. We were out in the parking lot and my brother said, in a very composed and worldly manner, “Second-cousin, I’d do anything in the world for you… but I won’t dance with that girl.”

So as we continued to tell more stories, our second-cousin’s wife said to me, “When you’re telling a story, you remind me so much of your Grandfather.” She was talking about my Grandpa on my mom’s side, who she remembered from his attendance at her wedding.

I was stunned. I thanked her for those words, saying she had no idea what that meant to me. My Grandpa, who died in the late 70’s, has always been a personal hero to me. Grandpa was a storyteller. I had so many memories of him holding forth in dens, family rooms, basements; a bunch of men gathered around him. He’d tell stories about his crazy family or growing up during the Depression, and just kill the room. I remember guys telling him to stop so they could catch their breath from laughing. And I remember thinking, “That’s the guy I want to be.” 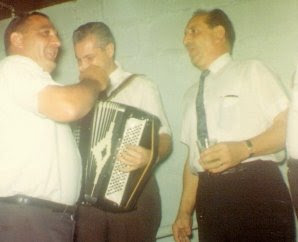 That’s my Grandpa on the right, at his 35th Anniversary Party, singing with his friends. I love how they all dressed up for parties back then. (mid 1960's) He also had a number of retirement parties too. I swear he used to keep getting new jobs just so he could have another retirement party. In addition to telling stories, he also used to play guitar… a big blonde electric guitar. He’d have other guys over who could play accordion or harmonica and they’d stay up all night singing standards and old Italian songs. His harmonica-playing friend played with an amp and it was always fun to watch them sneakily turn each other’s amps down. Grandpa could also play harmonica and kept several of them in his lower desk drawers, where his grandkids could find them.

That desk was a marvelous thing, full of cubby holes and compartments containing his draftsman’s tools, pads, pencils and other cool stuff. It’s no accident that I now have that desk in my bedroom.

The art of storytelling seems pretty much lost nowadays. People don’t seem to gather round just to talk any more. I try from time to time, but there are so many things that get in the way… A lot of storytelling (and joke telling) is all about rhythm and timing. Throw any of them off and the impact dies. Phones go off, the TV is on, people interrupt and step on punch lines… it’s frustrating.

It’s my Grandpa I have in mind when I tell my stories here and I hope it makes him proud. So when she said that to me about Grandpa, it was the best compliment I ever could have had.

Later that night, a cousin was talking to my other Grandpa and recording it on video with her digital camera. I don’t think Grandpa knew what she was doing.

My dad’s father is old school Italian and all of 93 years old. He’s so old school that sitting outside the Old School, they have a statue of him. He’s as staid and buttoned down as my other Grandpa was flamboyant. He doesn’t say much, but when he does, it’s usually something good. So after about 10 minutes of talking, my cousin asked him, in conclusion, if he had any words of wisdom for his grandson, the groom.

Grandpa said, “Tell him that if he takes after his Grandpa, he’ll be just fine.”

Oh, snap. Grandpa lays down the old world smack. I love it! 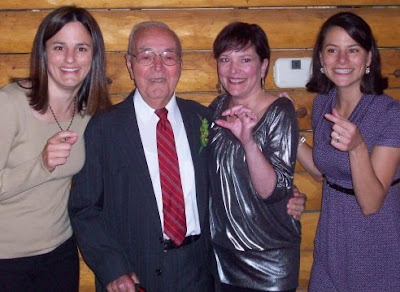 This is the Mack Grand-Daddy with his granddaughters. I have no idea what they were doing with their fingers. Must have been that IC Light memory block.

It’s just not a wedding reception until you get a baby out on the floor. Little Gabe, who belongs to the bride and groom, decided to go all Tony Manero and take over the dance floor. 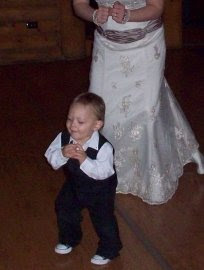 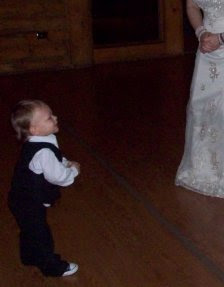 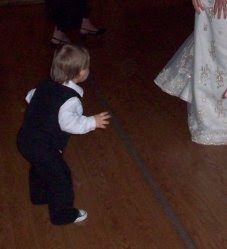 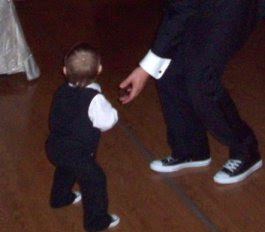 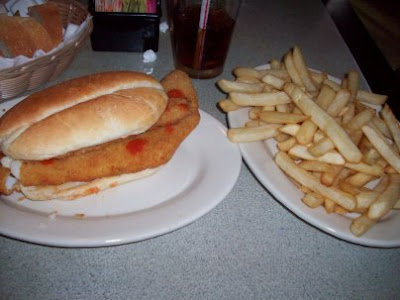 Yep, Segnari’s again for lunch. Like I said before, it’s just what we do. After lunch I got 2 more fishes to go. Gotta strike while I can. We probably won’t be back until next year. I would always regret the fish not eaten.

The trip home was much nicer than the one coming out. The sun was out and the leaves sparkled. The trip wasn’t without some controversy though. Pinky says she doesn’t like Monty Python. I maintain that it’s because she hasn’t heard the right sketches. I had a “right” sketch at the end of a mix CD we listened to. She remained unimpressed. “I liked 2 sentences at the end,” she said. Bah!
This bit always reminds me of when my friends and I get together and start remembering our past. Every time a story is told, there are another couple of asses getting kicked in it.

Now you tell me this isn’t funny…

Yeah, I thought so. Now I’m off to clean the lake.