Live-Blogging the Storm of the Century!

The news this morning says we're due to get between 20" and 30" before it's all done, which would break the Baltimore snowfall record.  That was in February of 2003, when we got 28" over President's Day weekend.

These are from that storm: 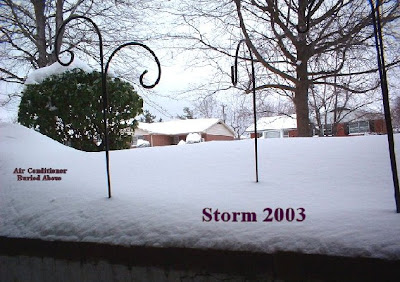 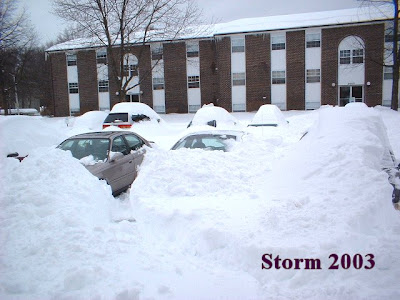 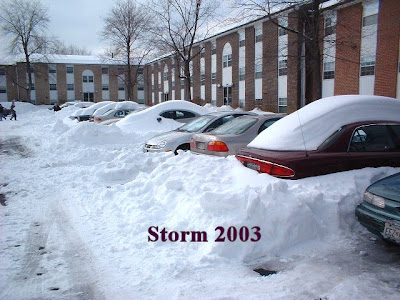 I got up around 9:00 this morning and anxiously peeped out the window to see this: 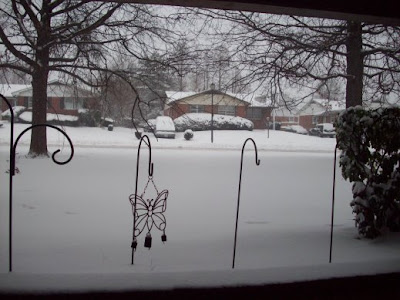 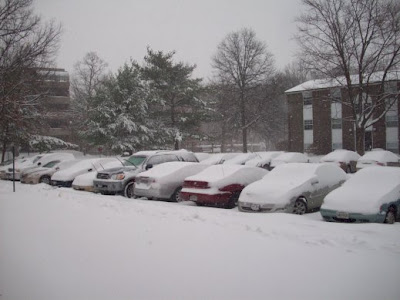 So we're just getting started here.

Pinky told me she already cleared off my car.  (She gets up pretty early.)  While I was thankful, we have a difference of opinion regarding these things.  She believes you should clear things off frequently throughout the storm.  I think you should go out and do it once, after all the snowing is complete.  It's the same difference I had with my ex-wife.  She thought I should be out there snowblowing the driveway every couple of hours.  Being that it was MY ass out there getting snow frozen into my beard, I preferred to get all ice-encrusted just once.

I don't know what's going on with the Steelers game tomorrow.  By original plans, the Ratbirds were playing at 1:00, followed by the Steelers game at 4:15.  Both were going to be on TV here.  But yesterday, given the storm forecast, the Ratties game was pushed to 4:15, so they could have time for snow removal.  This puts it in direct conflict with the Steelers game, which of course would bump it from TV.  (Both games are on Fox.)  That means I now have to venture out to Jilly's to see the game.

But wait!  Now word comes in that the Rats' opponent, the Bears, have not been able to get into town.  So that leaves the possibility that the game may get postponed further.  So I don't know where I'm going to watch the game, which leaves my mojo decisions up in the air.  Not that they've done any good lately.

Note:  Please check back to this post.  I'm going to be updating it throughout the day, as the snow piles up and the cabin fever sets in.  Well... not for me... I have my PC, some new DVD's, several shows on the DVR, a new AC/DC Guitar Hero game, plenty of beer and a Pens game tonight.  I'll be fine.  Pinky, on the other hand, will be clawing at the glass like a crazed, red-crested gerbil.

Noon Update
Yes, it's still snowing.  Has been coming down pretty hard all morning.  Here's the view out the front: 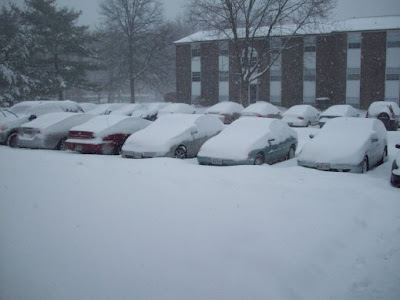 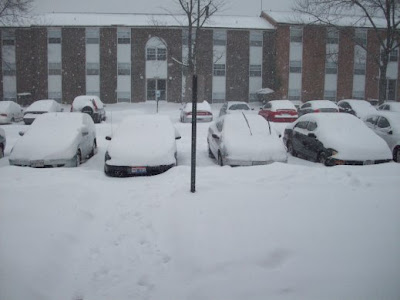 By the way, I have been asked to change my reference to Pinky as a Red-Crested Gerbil to that of a Noble Lioness.  And I am doing so in hopes that she will let me have some of the exquisite lasagne she made this morning.  Sorry, baby! 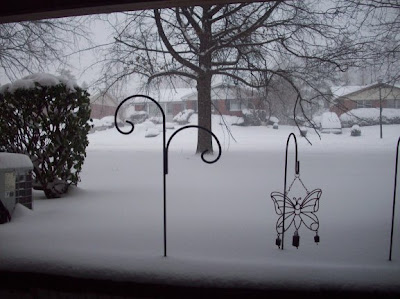 Looks like about 6 or 7" on top of the air conditioner.  I give a range because I'm not ambitious enough to go out and measure.  Now, out front: 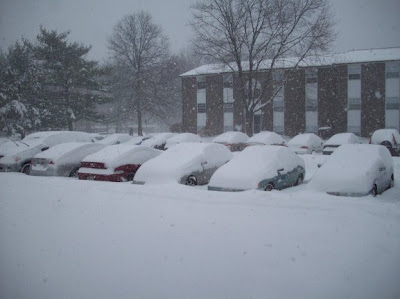 Looks like a little more out on the cars.

TV is showing the crews out at the Ratbirds Stadium, cleaning the snow out of the seats.  They expect the Bears to arrive later tonight.

Got myself showered and then spent about an hour playing Guitar Hero and trying out my AC/DC Rock Band.  I have a lot of room for improvement.  Highlight of the day so far: 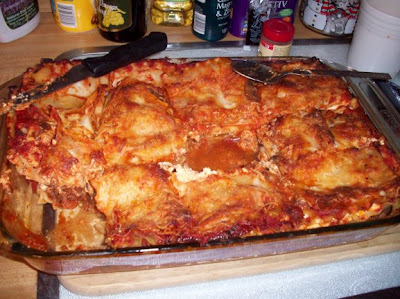 4:30 Update
Gee, it's still snowing.  Pinky just went out to clean off the cars again.  Can I pick'em or what? 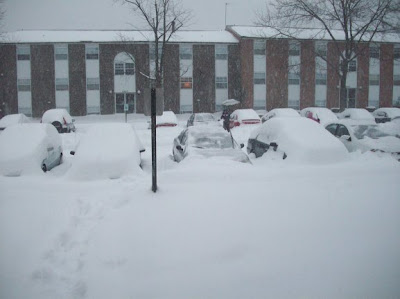 While working on the cars, she met a neighbor who is from Monroeville and proudly announced she was at Super Bowl XLIII.  Small world.  Unfortunately this season, the Super Bowl looks a million miles away. 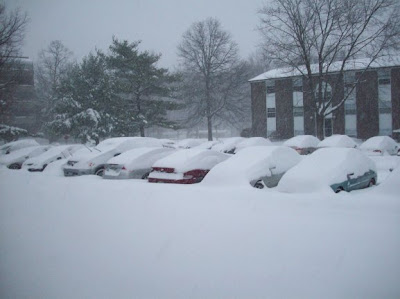 Still a butt-load of snow out there and it's coming down hard.  Let's check the bedroom window: 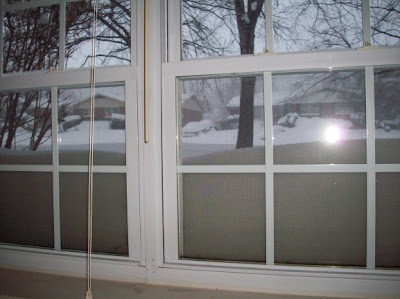 Have spent the last couple hours watching the Rock & Roll Hall of Fame Concert.  I've also been reading the 1st Harry Potter book.  I've always wanted to read the books, so why not start with the first one?  Couple more hours until the Pens game.  Got a little Wii Bowling on tap, until then.

7:00 Update
Still coming down hard, as is the dark. 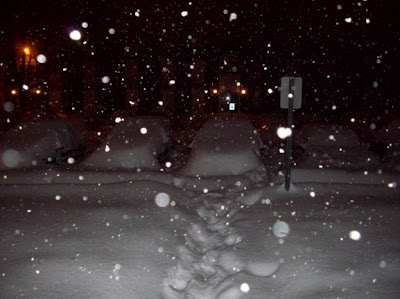 I think I'll have to give Pinky the win in the great car-clearing debate.  People that didn't start today are going to have a very big job tomorrow. 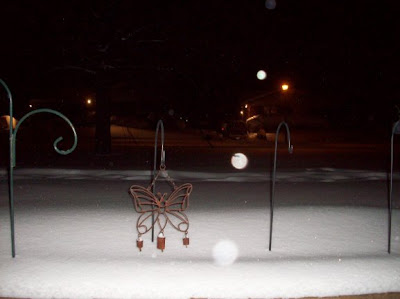 Can't really tell the depth out the back, due to insufficient light.  But it's just about game time now. Since the Pens are at Buffalo tonight, I'm rocking the white Jordan Staal jersey. 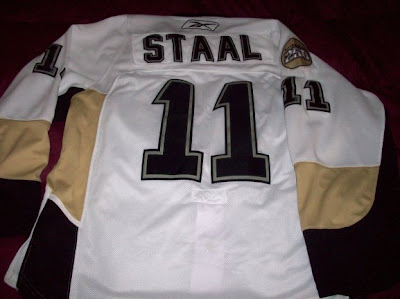 Since there are so many hockey games, I usually only don the mojo for Saturday night games.  Until the playoffs, of course.  Let's drop that puck!