The snow fell.  The people panicked.  We ate lasagne, drank beer and watched the Pens.  I read all of the first Harry Potter book.  The roads got plowed and life goes on. 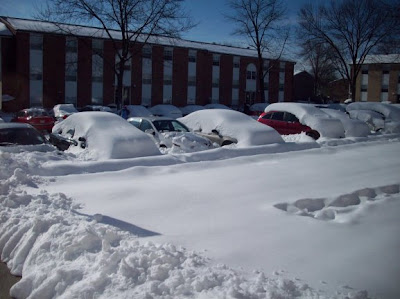 People are clearing off their cars and marking their spaces.  If someone takes my space when I get back from the sports bar, I'm going to throw a lawn chair through their windshield. 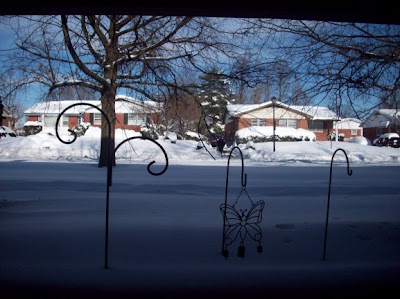 Before the storm put a kay-bosh on my plans to watch the Steelers game at home, I was going to try some experimental mojo.  Since my mojo efforts were going so poorly this season, I was going to try wearing some apparel that has always guaranteed a loss... kind of like Bizarro World Mojo.  Up is down, down is up, black is white and losers are winners.  With a record of 6-7, what can it hurt?

Unfortunately, this apparel is so butt-ugly, I wouldn't dare wear it in public.  In all likelihood, I'll roll it out next week for the Ratbirds game.  So for today, I dug into my closet for some classic, yet unobtrusive gear: 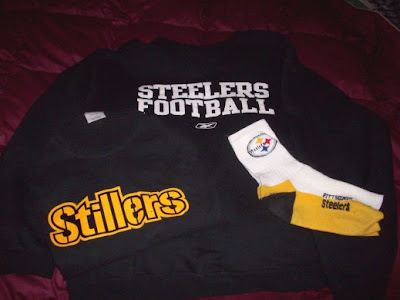 Block-letter Steelers sweatshirt, over "Stillers" Tee, with Steelers socks.  Unpictured: black Steelers ball-cap with tan leather trim on the edge of the bill.  (Unpictured, because I forgot to put it in the shot and I'm too lazy to take another one.  Baaad blogger.)

The Packers are my second favorite football team.  My parents lived for more that 15 years in Green Bay.  The town supports the team much in the same way Pittsburgh does.  So it's always tough for me when they play the Steelers.  Make no mistake though, there is no doubt who I am rooting for.  It's just that I can't summon any of the hate that I usually bring for our opponents.

The last time the Steelers played in Green Bay was the last year my folks lived there, so Dad arranged for a bunch of tickets... about 10 of us in total.  Luckily, it was an early season game in October. 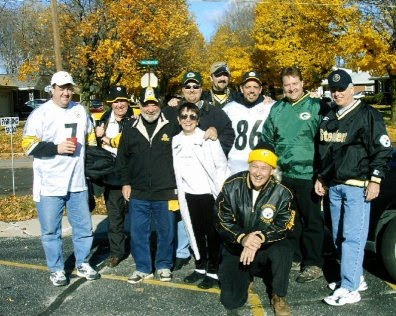 The parking lot attendant at the school where we parked happily took this picture for us.  They're just so nice in Wisconsin! 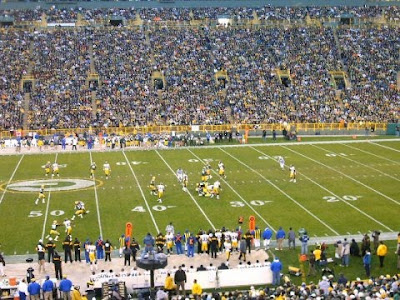 Even the people in the stadium were nice... "Oh, welcome to Green Bay!  How do you like Lambeau?  Hope you have a good time!"  It was unbelievable.  Picture that happening in any other pro stadium.  (Well, maybe in Minnesota, you betcha!)

Even the concessionaires were nice.  The lady selling me my beer wished me good luck.  I told her it was amazing to me that everyone is so nice to fans of the visiting team.  She said, "Well, you're not Bears fans..."

Speaking of, when I was visiting one year, I saw the Green Bay morning paper had a front page article about a garbage strike in Chicago.  In the blurb directly underneath, it said, and I swear this is true: "Speaking of steaming piles of garbage, the Bears will be in town this weekend to take on the Packers."

So, off we go.  Let's see if the Steelers can play up to their competition, like they did early in the season.  And worst case today, at least I get a solid quesadilla out of it.
Posted by bluzdude at 12:16 PM