With Super Bowl XLIV taking place this weekend, it’s time to dip into the family grab bag of Super Bowl stories.
Super Bowl XIII
My dad has always had to travel for business and developed quite a knack for scheduling trips to places where the Steelers just so happened to be playing, (like the Steelers/Dolphins Thursday night game I blogged about here.)
Dad hit the jackpot when he scheduled a trip to Miami for Super Bowl XIII; the 2nd Steelers/Cowboys Super Bowl.  Once in Miami, he planned on going down to the Orange Bowl and buying a ticket on the street.
On his way there, sitting at a red light in a rented convertible, someone called to him from another car, “Hey, need a ticket?”
Just like that, Dad had a game ticket for the grand price of $40.  Now the question was, is it a real ticket and if so, where were the seats? 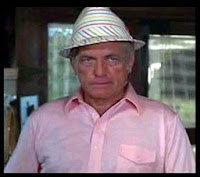 The answer was “yes,” and “the 40 yard line, surrounded by celebrities.”  Dad was sitting among OJ Simpson, one of his linemen and a dazzling blond he later recognized as the ill-fated Nicole, Ted Knight, and Joe DiMaggio.  There may have been others but I don’t remember the rest.  Ted Knight actually bought him a hot dog.  I think it went like this:


Ted: Would you like a hot dog?
Dad: I want a hamburger... no, a cheeseburger.  I want a hot dog, I want a milkshake, I want potato chips...
Ted: You'll get nothing and like it!
Hot dog in hand, he then had the privilege of watching one of the most exciting Super Bowls ever played.
Super Bowl XXX
At the time, it killed me not to be able to go to this one.  The Steelers hadn’t been in a Super Bowl for 15 years, which seemed like an eternity at the time.
Both my brother and my dad were going.  Both were able to arrange business trips to the area, so plane fare and hotels were covered.  I was not so lucky.
I’d just gotten married, lost a job and had only recently started working again.  I knew better than to even mention wanting to go, so I had to settle for living vicariously through my brother and dad.
They came back telling great stories about the swarms of Steelers fans that took over the town.  They said the Cowboys fans just didn’t know what to make of them.  The hotel had 2 large outdoor tents; one for each set of fans.  The Cowboys tent seemed to be a more sedate affair… lots of moneyed people wearing furs and boots.
The Steelers tent was, well, I’m sure you could imagine.  It was a raucous affair with lots of IC Light, good food and dancing.  Dad spent a good part of the night doing the polka with whoever wanted a quick whirl.
The game, however was another story.
I’ve never experienced a more soul-crushing loss in all my Steeler-watching years.  The 2nd half comeback was riveting!  The onside kick recovery was a ballsy call.  The Big Nasty D had the Cowboys’ offense’s number.  The Cowboys had no answer for Bam Morris and were completely back on their heels.  The Steelers were one score back and the game was Right There for the taking.
Then came that 2nd interception.  I don’t even remember anything that happened after that play.  I don’t remember the rest of the game, our party guests leaving, or even going to bed.  I do remember being very glad I didn’t mortgage the farm to go to that game.  Can there be anything worse than attending your very first Super Bowl, going through hell’s half acre to get there and then lose?
Which brings us to...
Super Bowl XL
2005 was an incredible season that really started in 2004.  That was Ben’s rookie year.  We went to a lot of games that year… We saw the Steeler lose at Baltimore, in the game that made Ben a starter after Maddox got hurt.  We saw the very next game, Ben’s first start, against the Dolphins in Miami, following Hurricane Jeanne.  (Full story of that adventure is blogged here and part 2 is here.)  We saw the game against the Jets in Pittsburgh.
My brother lucked out and hit the Steeler Season Ticket Waiting List Lottery for the playoffs and so we then had the opportunity to go to the Jets game, featuring the Holy Doink (Jets kicker misses 2 field goals in the last 2 minutes, including one off the post) and the AFC Championship game against the Patriots (aka Soul-Crushing loss #2).
Getting this far with a rookie QB made the prospects for the 2005 season very bright.  That year we traveled to Green Bay for the Steelers/Packers game and saw the Steelers lose in OT in Baltimore as Tommy Maddox had to step in for an injured Ben.
After losing 3 in a row, the Steelers won their last 4, starting with the Bus rolling over the Bears in a Heinz Field snowstorm.  They charged into the playoffs with the 6th seed and a game in Cincinnati.  That’s where my brother and I met this clown and almost had to fight our way out of the parking lot: 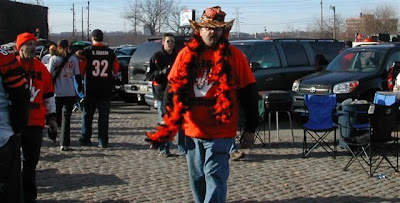 Huge wins against the Colts (the Heart Attack game) and the Broncos (a Mile High shellacking) set up the Jerome Bettis Homecoming Super Bowl in Detroit MI.  As I touched on in this post, this game was the perfect storm.
First of all, it was within driving distance, eliminating the need for airfare.  Second, we grew up in Toledo and have a great nest of friends there.  We could stay with them and forget about hotel reservations.  All we had to do was get tickets.  This job is always entrusted to my brother, The Ticketmaster.
He was able to secure a block of tickets, but it wasn’t going to be cheap.  There was a block of 6 tickets available at $2600 apiece.  That was a big chunk to swallow.  To do this, I’d have to devote my entire annual bonus and tax return, then live fairly lean for the rest of the year.  Even so, it was still going to be uncomfortably tight, so my brother and dad told me to fork over the 2K and they’d help with the rest.  For this I have been eternally grateful.
So my parents planned to fly up from Florida and Ed and I drove out from Baltimore.  The other 2 ticket were claimed by long-time football trip-going friends.  Bob, who came with us on the Hurricane Trip and many other football adventures, drove out from Charlotte NC.  The other ticket went to Margaret, an old Toledo neighbor who was a veteran of the many Cleveland trips we undertook in the 80’s.
Weather was an issue, however.  We had to bump up our departure time and plow through some snow to get to my buddy’s house, but we made it uneventfully.  Bob had a much tougher time coming up from the south.
Normally when you think of going to the Super Bowl, you’re thinking about sunshine and palm trees.  Not so with this one.  Detroit was coated with about a foot of snow and temps were in the 20’s.  It was terribly difficult to find our war around because all the street signs were covered with blown snow.  And apparently all Detroit could afford by way of event signage were some marker-on-cardboard signs, which were taped under various street signs.
Our first order of business was to secure the tickets.  To do that, we had to get to a Detroit hotel, where the sellers (ticket brokers) had a “suite.”  How long could that take?
Answer, “forever.”  There was a line that snaked back and forth across the entire width of the hotel floor, crammed with people full of Super Bowl dreams.  Gee, it seems there’s a lot of money to be made in reselling Super Bowl tickets.  What I wonder is where they all came from?  These brokers had access to literally thousands of tickets.  Don’t tell me there’s not a ton of back-room dealing at the league level.  It also occurred to me that it would make a great “heist” movie if someone could do a story about ripping off a ticket broker at the Super Bowl.  I’m picturing “Ocean’s Eleven”, with jocks.
Our tickets came with a tailgate party, which we located about 11:00 and was within sight of the stadium. 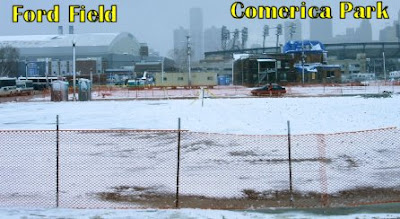 It looked close, but of course, "you couldn't get there from here."  We had a long way to go before we could get inside.
Unfortunately it didn’t officially “start” until noon, so we had nothing to do but stand around and freeze.  When it finally did open, we realized that cold beers and lukewarm hot dogs were not really helping our attitudes, so we bailed on the tailgate and went to hang out in a Greektown casino.  I figure I’ve paid my suffering-in-the-snow tailgating dues with that 11-degree game against the Patriots. 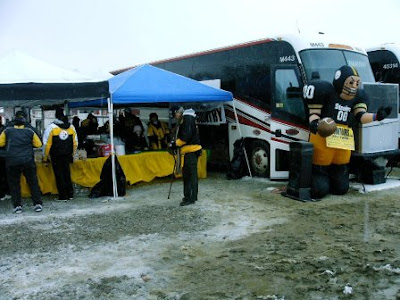 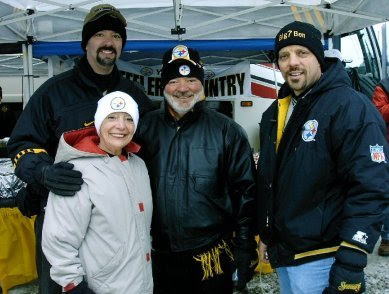 Family portrait... Freezing together, cheesing together.
Next: It’s Gametime! 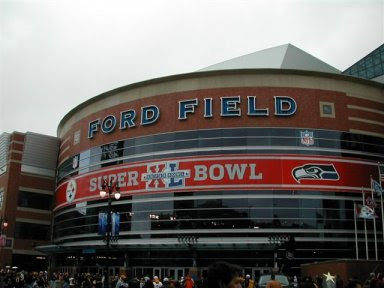