After the game Saturday night, we didn’t really want to go out anywhere, but weren’t quite ready for bed, so we sought out the hotel bar for a nightcap and appetizer.  Nothing like a late Jack on the rocks and an appetizer sampler to rock you to sleep.

Sunday’s game was at 1:30 so we had the morning to kill.  After we jumped on the complimentary breakfast, (no bacon?  WTF?), we took another walk around town.  After having already gone to the Market Square area, I figured we walk across town and cross the Smithfield St. Bridge to Station Square. 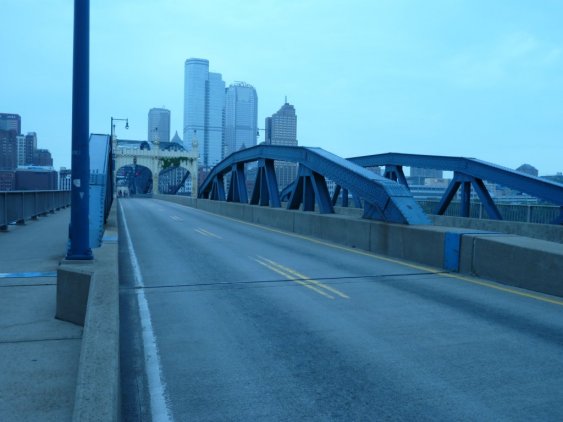 When we left the hotel, it was overcast but dry, so I opted to leave my rain poncho in my suitcase, which I loaded into the car.  Naturally, by the time we got to the bridge, it had started to drizzle.  We ducked into Station Square, which was mostly closed, but dry.  Hometowne Sports was open though, so I spent a while in there, surrounded by more Steelers, Penguins and Pirates stuff than you could count.  Just walking in there made my nether regions start to swell. 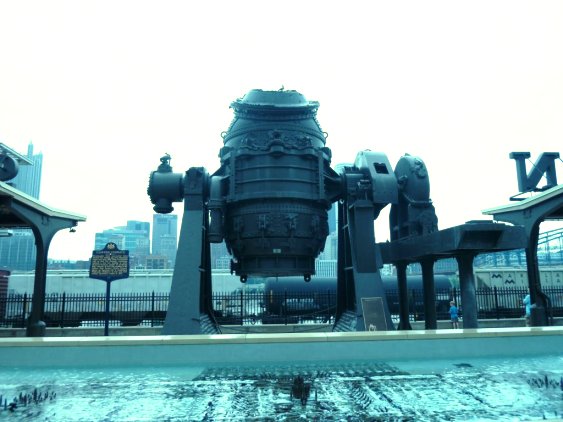 The Clinton Furnace, outside Station Square.  This was Pittsburgh’s first steel furnace.  I think it looks like R2D2 if he was a Transformer.

We killed about 45 minutes in there… there’s only so much to do in an empty mall… but when we walked outside we found it was still raining.  Again, we opted to push on so again, it started raining harder.  Once back across the bridge, we found shelter under a large awning in front of a building.

The rain let up about 15 minutes later so we set out again.  I stopped by the car to get my poncho.  By this time, it was getting close to 1:00 so we decided to head back to the park.  They were having a March of Dimes Walk-a-thon in Pittsburgh that ended in front of PNC Park, so we walked across the Clemente Bridge surrounded by a bunch of happy, baby-loving do-gooders. 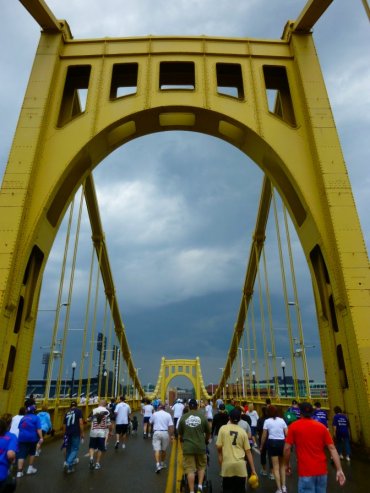 I refrained from taking any of the post-walk goodies they were giving away.  Just trying to do my part…

Once we got to the entry gate, we sent Jake over to the car to get their rain stuff.  Don’t worry, it wasn’t far. 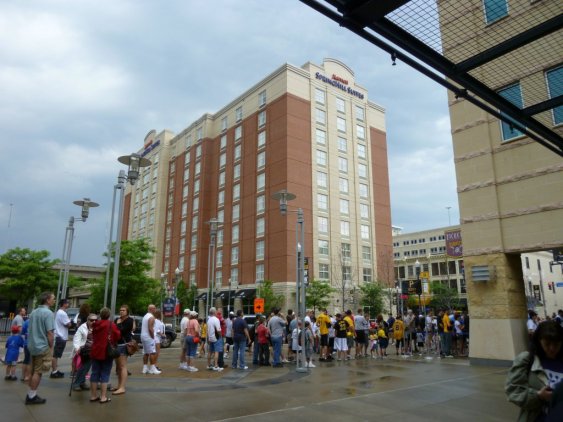 This was our hotel.  I took the shot from the front of the gate.

We had been told that they started letting people in 2 hours before game time, but in fact, that was only for season ticket holders.  The rest of us riffraff had to cool our heels for another half hour.  We were not pleased, not only because our dogs were barking, but the sun had come out and we were beginning to simmer in our own juices.

I now have a new axiom to add to the Book of Bluz.

Bluz 3:22 – The only way to guarantee that it doesn’t rain is to go to great trouble to carry your rain gear.  The more pieces; ponchos, umbrellas, rain pants, the less likely it is to rain.  Word.

Once they let us in, it instantly became a beautiful day at the ballpark. 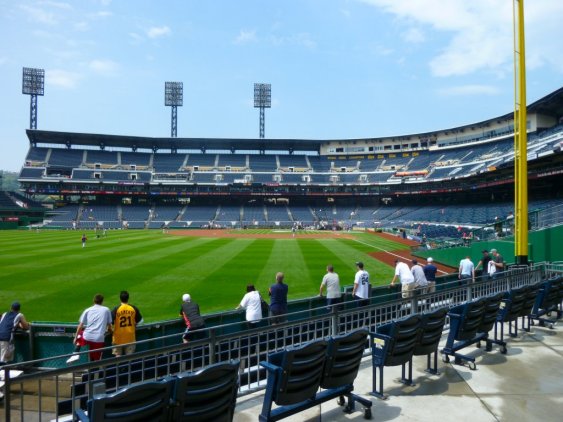 Our seats were in Section 5, 4th row.  This was about halfway between 1st base and the outfield wall.  Sweet!  Rik had purposefully picked the side that his Tigers were going to be on for us to sit, as to facilitate perhaps snagging a ball or getting an autograph for Jake. 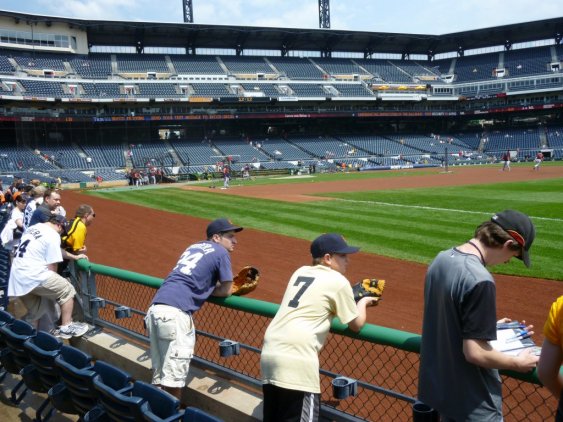 Jake (#7) waiting for some players to show up.

There was one problem though… No one that wanted an autograph remembered to bring a freakin’ pen!  That kind of kills the autograph opportunities.

To make matters more difficult, the boy was too shy to wade into the crowd of other autograph seekers to ask to borrow a pen, or call attention to himself in any way.  It was too bad… there were a couple of Tigers signing right near us. 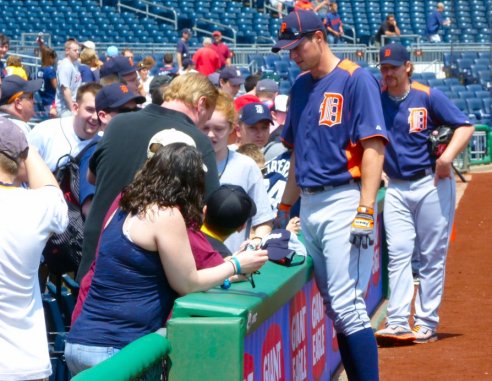 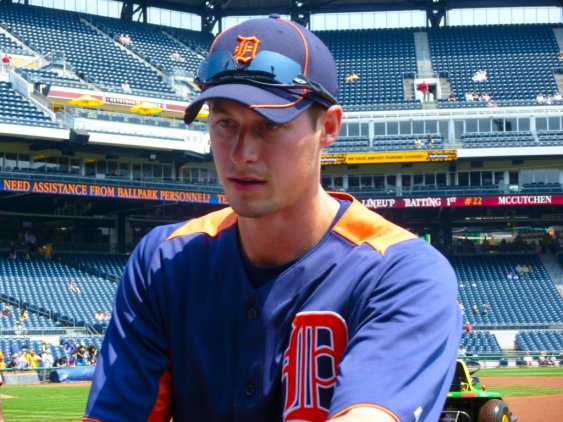 While Jake stood near the wall and silently hoped some player would come over and bring him a ball, Rik and I set out for some grub.  I wanted to go to Manny Sanguillen’s BBQ Stand.  Manny was the Pirates’ catcher through the 1970s and was a close friend of Roberto Clemente.  Sometimes Manny sits out by his place and signs autographs, like Boog Powell does for Orioles fans at Boog’s BBQ in Camden Yards.

Back in 2002 during my first trip to PNC, I got to talk to Manny and told him that as kids, he was my favorite player, right after Roberto.

Unfortunately he wasn’t there this time around, but his sandwiches were, and by God, that was one good pulled pork sandwich.  It’s just too bad I made it disappear long before it dawned on me that I should take a picture of it.  As for Rik, he raved about his sausage and onions.

Rather than go right back to our seats in the sun, we ate higher up in the stands, in the shade. 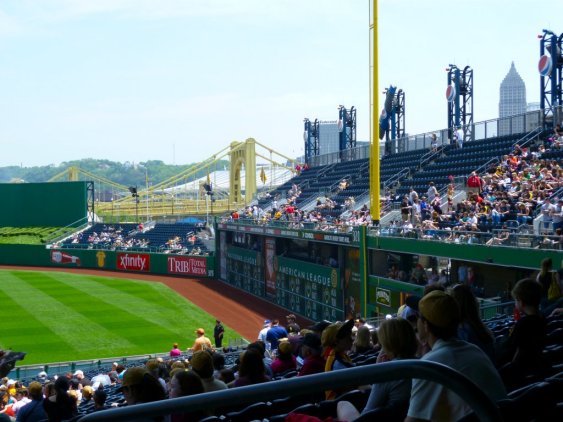 Chowing down and checking out the weird “stadium seating-like” stands in right field.

Once we finished our eats we went back to our seats, where the Tigers were out on the field warming up.  It was an excellent picture-taking opportunity.  Someday I’m going to have to sit that close to a team I actually like. 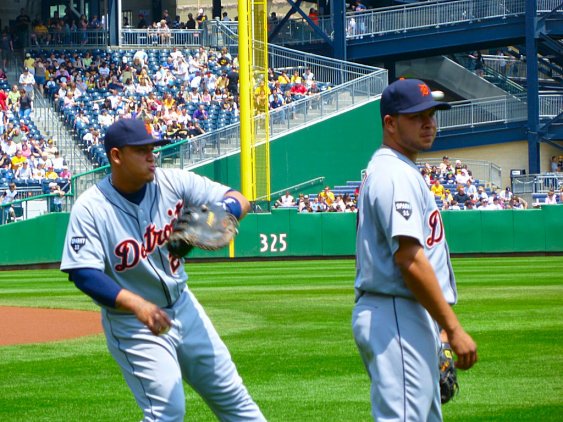 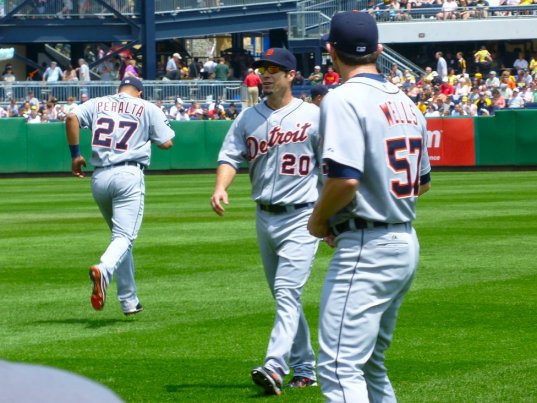 The Tigers’ Peralta, Sizemore and Wells, getting loose. 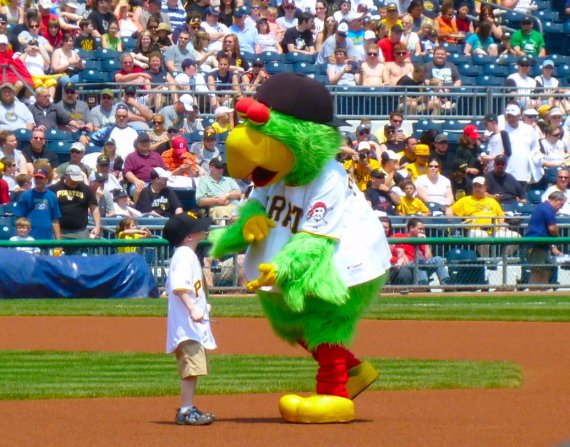 Some kids get all the luck!

Once the game started, I had another opportunity for some action shots using my newly acquired camera with the 10X Zoom.  I also use the burst feature that takes 3 shots in a row.  At worst, one of them is half decent.  At best, I get a 3-piece action set. 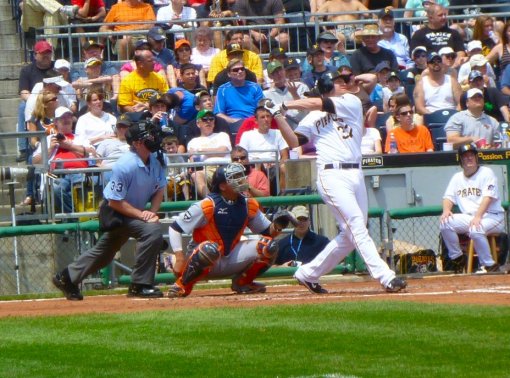 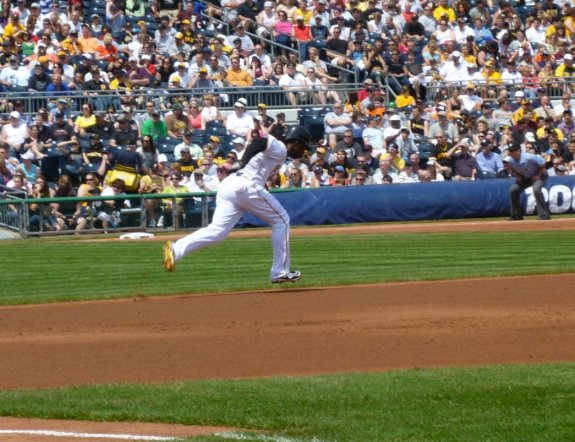 After winning 6-2 Saturday night, the Buccos didn’t do very well on Sunday.  They lost 2-0, with the Tigers holding them to 2 hits.  They got roasted almost as badly as I did.

Like I said earlier, I was more concerned about rain than direct sun.  But the sun was just behind me and to the right all game long, so I ended up with a sunburn on the back of my neck, my forearms and my thighs.  My legs look ridiculous… upper thigh is white, lower thigh is red, shins are white.  I look like a goddamned candy cane.

In addition to that, between the driving for 4 hours and the clapping and cheering Saturday night, I had a wicked case of hives on my hands.  Luckily there wasn’t much for me to clap about on Sunday.

After the game, we said our goodbyes and split up.  I was concerned about getting out of the city amidst all the game traffic, but it really wasn’t too bad, what with already being parked on the other side of the river.  I made it home by about 9:20 and fairly sprinted into a cool shower.

All in all, it was an awful lot of fun.  For next year, Rik’s already cooking up a plan for the three of us to take a train to Chicago and catch a game out there.  I haven’t been to Wrigley since I was in 4th grade, so I’m all over that.

Meanwhile, this coming Saturday I’m jumping back in the car and driving back to The Burgh once again.  I have a cousin getting married, whose wedding I wouldn’t miss for the world.  And if that wasn’t enough, on Memorial Day there’s the Bag’O Fish Fry at the Carpetbagger’s house.  Last chance to get in on the action!  If you’re going to be in Pittsburgh this Monday and you’re reading this, you’re invited!  Click here for details.

So I can see I’m going to have a lot of material to write about… the wedding, the BBQ, and I have another post swimming around in my head about my experience at PNC Park.  Granted the Pirates have done a lot of bonehead things over the last 20 or so year, but I want to talk about some of the things that I saw them doing right!
Posted by bluzdude at 7:53 PM