Two weeks ago, I mentioned in a post that I had to go to the doctor’s and have him look at my shoulder, which has been giving me problems for almost a year now.  He took an X-Ray that was inconclusive, and then sent me off for an MRI.

I had the MRI done on 4/26; it was my first.  I’ve had CT scans done before, where they slide you through this giant donut that takes the scan.  In my case, it was to map my blood vessels, so they had to shoot me with “contrast”, which would then show up on the scans.  (The funny thing about that is that it all seemed to collect in my groin.  As soon as they shot it in, my balls got all hot.  Weird…)

Anyway, the MRI is another story.  This is the one where they slide you into a tight little tube for a HALF A GODDAMNED HOUR!  I can see how people might freak out about the cramped quarters and how you’re supposed to stay perfectly still.  For the most part, it didn’t bother me because I knew I was in a nice office building and I could see sunlight from the window behind me.  But if I were in the same physical circumstances, say, 1000 feet underground, they would probably find me dead on account of bashing myself against the top of the tube in a full-on blind panic.

In this case, I figured I’d just close my eyes and relax; maybe even have a sleep.  With your eyes closed, it doesn’t matter where the walls are.  The only problem with my course of action was the unbelievably loud noise.  They gave me earplugs before I went in, but whenever they turned on the machine it hummed and banged like an industrial machine shop.  It was kind of like going to a Nine Inch Nails concert.  I spent the time trying to pick a song from my memory banks that synched up with the rhythm of the banging.

They broke it up into segments, so it wasn’t like it was one big 30-minute chunk.  They’d say, “This part will be 4 minutes”, or “this part will be 5 minutes…” I escaped the tube none the worse for wear.  I left with a big sleeve of films to bring back to my Ortho doctor for evaluation, last Monday. 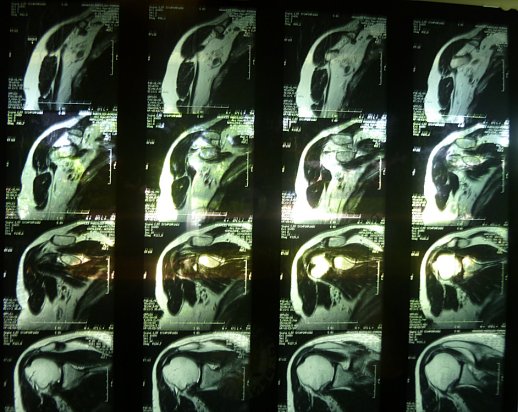 The doctor looked at the MRI and determined that I had 2 separate issues:

* A partial tear of the rotator cuff.
* A superior labral tear (SLAP tear), where the biceps tendon pulls the labrum (cartilage covering the end of the bone in the socket) away from the bone.

The first prescribed course of action he gave me was a round of physical therapy, 3 times a week for four weeks.  (And they have a PT unit in the same office, which is very convenient for me, as the office is about a mile from my apartment.)  He also gave me a cortisone shot, which was surprisingly painless… no more painful than having blood drawn.  I’d heard that it was sometimes very painful, but the doctor said if varied by where you were getting the shot.  The hands and feet were much worse.

I soon learned that things would be nearly as convenient as I thought, because the in-house PT unit didn’t take my insurance, so I was on my own to find another one.  Luckily, Pinky had already done some legwork on that, so I had the number of another PT center nearby that did take my insurance.  (I had no idea Aetna would be so hard to use… I thought they were one of the “big ones.”)

Tomorrow I go in for my initial consultation, so I’ll see how it goes from there.  I was glad that the doctor wasn’t all about surgery as a first option, but still, I’m worried.  Physical therapy is not going to heal torn tissues.  It can strengthen the surrounding musculature, but it can’t mend cartilage and tendons.

The doctor described it as being like a piece of paper… You can pull on the ends of a piece of paper and it is very strong.  But if you put just a small tear in it, pulling on it is likely to make it tear more.  So my long-term diagnosis is basically dependent on how much pain and restrictions on movement I care to endure, for the rest of my life.

So much for a second career in javelin throwing.

So just in case that didn’t panic me enough, I asked about the recovery time for a prospective surgery that would go in and fix it.  He said I would be in a sling for four weeks, with a recovery period of 3-6 months.

I am so screwed.

All week I’ve been thinking about what it would be like to have one arm out of commission for a month.  This is my right shoulder and not only am I right-handed, I’m uber-right-handed.  My left is basically a little T-Rex arm that does nothing but act as a counterbalance for the right, so I don’t tilt.  Hence, I’ve come up with a whole list of things to worry about…

How am I going to brush my teeth or wash my hair?  How does one cut food with one hand?  Or put on socks?  How will I put in my contact lenses without my clumsy left-hand fingers poking my eye out?  Driving would be out of the question, I suppose, at least at first.  If it were wintertime, clearing the car of snow or scraping frost would be a major chore.

On the bright side, I could still type, because my arm would be down and relatively stationary.  Might have to move the mouse to the other side.  But I’d be able to telecommute and dial in to work from home.  That would solve the inability to dress and groom myself.  And for meals, I could just eat things that don’t need cutting, like, say, BACON!  They come in nice little individual pieces.  When eating, I’ll have to be careful of using any sharp utensils in my left hand.  Otherwise I’ll be down at the emergency room getting the fork removed from the side of my face.

“And that was the start of my eating problem…”

Also, I wouldn’t look forward to walking around the streets of Baltimore with a sling.  That would be like being an antelope with a limp out on the Serengeti.  The hyenas would be all over my ass.  Normally I don’t worry too much because troublemakers like easy targets.  As I stand right now, they don’t know I’m not a former Green Beret gone to seed.  But in a sling, I’d look like prey.

Anyway, I have a lot to think about.  I’ll just have to see how the PT goes.  I’d hate to think I’d never be able to toss a ball or throw a Frisbee with my nephews again.  Not even 50 yet and already it’s like I’m in mothballs.

Not a happy thought for a Mother’s Day.

And speaking of, let me first wish a happy Mother’s Day to all my blogging friends who are mommies or are about to be.  I hope you receive the love and adoration you deserve.  I’m perpetually amazed by the things I read about you doing for your families.  You are truly heroes to this nation.

Secondly, let me wish a happy Mother’s Day to my own “Lil Mother,” without whose influence, this blog would have never been.  My mother instilled in me from my earliest days, the joy found in writing and storytelling.  Everything I do here is a direct result of her influence.  Except maybe the dick jokes.  I was going to say “fart jokes,” but remembered that she was the one that taught me my first fart jokes, back in 3rd grade, complete with elaborate gestures. 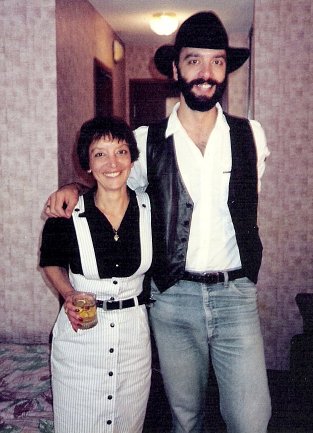