Just when I think I’ll never generate a decent blog idea, I got an email from blogging and Real Life work-friend Goldey.  We were talking about phone assignments at out emergency site.  I needed a name for a particular phone but there was no one in particular sitting at that station:
Bluz: OK, I’ll just label it The Hotline.  Like the Batphone.
Goldey: Now I want a Batphone on my desk… oh wait… or a big old symbol in the sky related to Compliance, so when someone screws up, they can shine it up in the sky and an Auditor will go, straight away.
Bluz: Yes, because that’s what we really want when we’re stressed out and under pressure… an Auditor to show up.  What’s the symbol going to be, a thumbscrew?
Goldey: I think that would be perfect.  If people didn’t screw up so much, I’d be out of a job.  Keep on keeping on, my faulty friends.  Keep on keeping on.
Bluz: Am now wishing I had better photoshopping skillz…
We used to have this big wooden nutcracker on our living room table.  It was like a big, thick ring and a handle would screw into it to break the nut against the back of the ring.
# Times anyone ever cracked a nut with it:  1
# Times my brother or I tightened it on our fingers:  1,256,248.  Give or take…
Goldey: LOL… My husband has one shaped like Hillary Clinton.  You crack the nut with her thighs.
Bluz: I’ve seen that one… not terribly dignified for a Secretary of State.
Goldey: He only bought it because he knows I’m a Democrat.
Bluz: Of course.  But you should have told him not to give you any ideas.
Goldey: I believe I told him a lot of things.  And then I hid it in his Man Cave.
Bluz: Ouch.  That must have been uncomfortable.
Goldey: OMG… I just did a spit-take.
Bluz: FTW!  (Mom, Dad, that means “For The Win!”)
Goldey: [grumbles as she wipes off her keyboard.]
Bluz: [Taking victory lap around the office…]
Goldey: I bow to your prowess.
Bluz: [Sending up some wet-naps via inter-office mail.}
Apocalypse Pretty Soon
Are you catching any of this horseshit about Judgment Day coming this Saturday?  It’s the same old shit… some bible-thumping moron claims the Bible has given him “proof” that 5/21/11 will be Judgment Day, where all the true believers will be taken up to heaven in the Rapture.  Everyone else will endure Hell on Earth.  I wonder if anyone living in Cleveland would even notice?
Of course, this theory differs widely from the alternative theory that Judgment Day is when the Skynet Computers become self-aware and set out to exterminate all of mankind.  People that adhere to that theory are called Terministas. 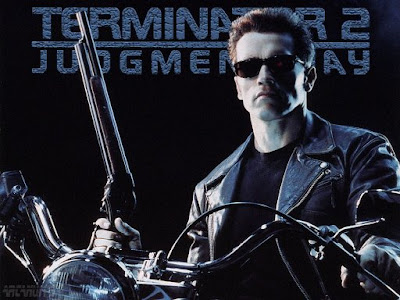 Coming soon – "Terminator 5: Rise of the Ninnies"
Obviously Arnold is a Terminista.  Why else would he have picked now to announce that he’s been banging The Help?
Random Thought: When the Apocalypse comes to the Caribbean, would it become “Apocalypso?”  That sound so much more inviting… Facing the End of Days with lively music and an umbrella drink.
It’ll be funny once Saturday comes and goes.  Then we can look forward to watching these Judgment Day Assholes start tap-dancing.  I’m guessing it will sound something like this:
“It was definitely supposed to be Judgment Day, but we, the Chosen Few, prayed so hard to spare mankind that the Lord listened to us and postponed the Apocalypse, so he may continue to rule over Heaven and Earth.  You’re welcome.”
Nice… Day called on account of reign.
Anyway, it BETTER not be the End of Days this weekend… I’m going to Pittsburgh, babee!  Road Triiiiiiiiiiip!!
My buddy Rik, from Toledo, is a big Detroit Tigers fan.  Two years ago, when the Tigers played in Baltimore, he came out here for a couple of games. 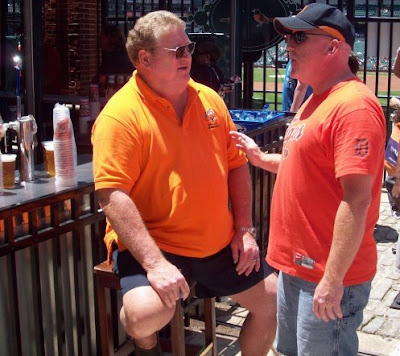 Rik talking shit to Boog Powell.
Since then, we made plans that the next time the Tigers had inter-league play in Pittsburgh, we’d meet up there for the weekend and see some games at PNC Park.  That’s this weekend.
He’s taking his 11-year-old son with him, so it’ll be a Dudes Weekend in The Burgh.
I’m looking forward to showing them around dahntahn a little bit.  It’s not like I’m an expert or anything, but at least I’ve been there a time or two.  I’m pretty sure I can get us from the North Shore to Market Square and back without falling in The Mon.
It’ll be a quick trip… out Saturday, back Sunday.  I may be able to throw a Tweet now and again, but I won’t be able to post until I come back.  OK, obviously I could set up some posts in advance to run over the weekend, but seriously… I’m taxing my limits right now just doing this one.
So let me bow out with some random Goofy Shit:
First, a look at how Engineers invented the word “boob.” 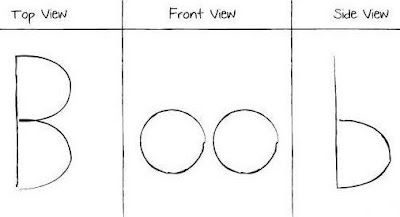 Thank you to Bluz Daddy for the email.  And which one of your geezen friends sent you this one?
Now, if you’re an “art” lover, how can you not be impressed with this reimagining of Van Gogh’s Starry Night: 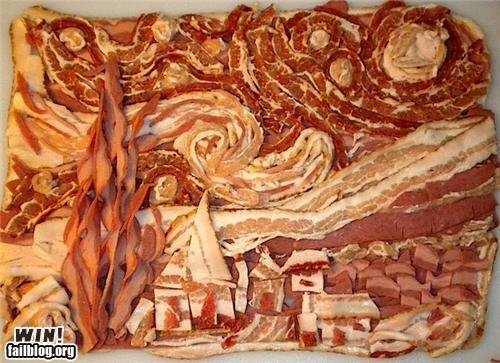 Who knew fine art could make you hungry?  Photo from Failblog.org
Which reminds me, the weekend after next, on Memorial Day, Darwinfish2, in conjunction with Carpetbaggery, will be holding the second in the Darwinfish Fry series: The Bag’O Fish BBQ.  If you’ll be in the Pittsburgh area on 5/30 and would like to join us, please drop me a line or comment.  Click here for details!  Time’s ticking away before we have to drop the velvet rope…
Posted by bluzdude at 7:27 PM

I saw my first apocalypse subway ad tonight! Apparently you can download the doomsday book for free on some website, or you can BUY IT FROM B&N. Come on, Barnes & Noble! Have they no shame?

Kamran and I made reservations at a really fine steakhouse on Saturday night, just in case.

Mundane,
Try to get a seat by the front window, to get a good view of the people being taken up in the Rapture. Say, I hope no one is "chosen" while driving a cab or something... Would they have to smash through the roof of the car? Or would The Lord let them open the door first? So many questions...

I have a $2,000 bill due for a recent car accident, for which I *apparently* was not covered by my insurance. Am holding off until Monday morning to write the check, just in case the other driver is an Evangelist.

There's something to be said for being among the sinners.

Sherry,
Good idea. They won't need the 2Gs once they're called home. I wonder if they have a cashless society in Heaven, like on Star Trek...

1. Lmao at the man cave comment! EXACTLY what I needed after todays shenanigans.
2. I don't see how any bible reading christian can believe the rapture is this weekend since the bible is pretty darn clear that nobody will know the day or hour and that it will be like a thief in the night. I guess I should get one of those bumper stickers that says "in the event of rapture, this car will be unmanned "

I'm going to wear gold lamé hotpants all day tomorrow just in case it does happen, because you know that's what Jesus likes.

"I wonder if anyone in Cleveland will notice."
"Day called on account of reign."

He'll be here all week! Don't forget to tip your waitress!

Have a good Rapture, everyone. ;)

And I always wondered where the word "boob" came from!

Have fun in Pittsburgh!

I love those bumper stickers that say "In case of rapture, this car will be abandoned." Does that mean it's available to any of us left here for the taking?

Raven,
Geez… all I was going to do was max out my credit cards. I like your ideas better.

I wonder what Armageddon would look like in Pittsburgh… My guess is that everything would from black and gold, into Browns colors. The Yinzers would freak…

Miley,
Funny you mention that… I intended to link to a story that had various people using the Bible to debunk this whackaloon’s Judgment Day pronouncement, but I forgot. And even when I went back to put it in, I got distracted by a typo or something, and forgot again. But your statement was one of the debunking points.

Mundane,
I was thinking “toga.” That would make for a much better party.

Red Pen Mama,
You have to admit, the “reign” joke worked like a charm!

Now I have that Blondie song “Rapture” going through my head…

Mrs Bachelor Girl,
Who knew that engineers had that in them?

Jessica,
I hope they at least have the courtesy to leave the keys.

Regarding your link… OMG. What a great idea. Atheists charge an upfront fee to take care of any pets left behind by owners that have been taken in the Rapture. I only regret that I didn’t think of it first. Freakin’ brilliant!

Tom is reading in the corner, raising his eyebrows every time I snicker, which I'm doing a lot. :)

That pet site has gotten a lot of mileage! So funny! I'll be @ the FB looting party, if anyone's looking for me...

Looks like Judgment Day came early for Arnold, and for Newt as well.

I hear the old preacher man has gone underground. Do you think he's going to scam people into believing that he was the only one who was taken up to Heaven?

Cristy,
So I’ll be expecting to get an email from Tom any day now… “Are you the Sonuvabitch that keeps making my wife laugh? Knock it off; it’s disturbing my reading!”

The pet thing was in the paper the day after Jessica sent it to me… I hadn’t heard about it until then. Again, what a great idea! And it’s so funny that they have to swear that they’re Atheists, so that their customers are positive that they won’t renege on the deal on account of being called home to Jesus.

Judie,
I saw Starry Night when I visited the MOMA in NYC, a number of years ago. (It was either that one, or a similar Van Gogh… it’s been a while.) I didn’t expect to have the reaction I did, but I was amazed. All I could do was stare and marvel. It was just brilliant!

I’ve been out of touch this weekend, so I haven’t seen any news. The old coot went to the mattresses? Right. He’ll get spotted one day at a Piggly Wiggly somewhere, mark my words. They he’ll probably lay some shit like, “I asked The Lord to let me return, so I could continue His work…”