Abbottabad To The Bone

There was some kind of big news story this week, right?  Oh yeah… the last 15 minutes of Celebrity Apprentice got pre-empted by the President.

Right… we got bin Laden, but unless you’ve been in a coma all week, you already knew that.  The news coverage of every conceivable angle has been unending.

I’ll admit that I was pretty happy with the way things played out.  Sunday night, I was all,
AMERICA… 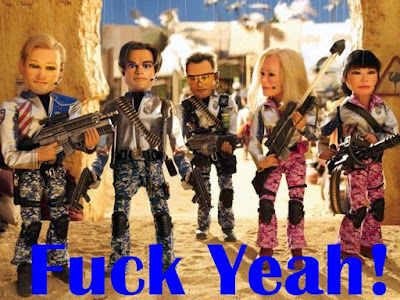 It’s nice when one of our military operations goes that smoothly, even considering the loss of one of our helicopters, and accomplishes exactly what it was supposed to.  It took a while, but our boys found that rat bastard, snuck in, took him out, and took him with them.

Naturally, there is a cacophony of controversy, as there with pretty much anything that happens any more.  Here’s what people are fussing about…

Good riddance.  His death saves us the trouble of deciding what to do with him.  Remember the other guy, Khalid “You want fries with that?” Sheikh Mohammed?  The guy that actually thought up the 9/11 plan and had it carried out?  Osama merely gave his approval; KSM was the guy that got it done and we have had him in custody for years.  First they were going to try him in New York, but they did an about-face and redecided on a military tribunal.  No matter which way you go with this guy, there are problems.

There are no such problems with bin Laden.

I also don’t have a problem with the quick burial at sea.  Makes sense to me not to leave a future shrine for our enemies to rally around.  And the hell with whether all the proper Muslim rites were done.  Again, there were almost 3000 people that weren’t interred at all, let alone with any rites.

The Pakistanis are pissed because of the unauthorized mission in their country.
Tough shit.  If they were anything resembling competent as allies, we wouldn’t have had to go in ourselves.  They want to prevent more unilateral attacks on terrorists, start doing a better job of finding them themselves.  If I’m the Prez, I tell them they’re on the clock right now.  Start handing over al-Qaeda terrorists or we’ll use some of that intel they took out of Osama’s compound and go get a couple more.

Conspiracy theories about whether he’s really dead, because there will not be any pictures released.
At first, I was sure some pictures would leak out or be released and I thought it was a good idea, as so to prove it was Osama.  But the more I thought about it, I realized it would prove nothing.  If the Birthers have shown anything it’s that nothing can “prove” that a crazy idea is crazy to the crazy person.  The conspiracy nuts would claim it’s a fake, just like they’re doing with the long-form birth certificate they’d been clamoring for.

And after all that, the picture itself would be used to incite the radical Muslims who are already looking for reasons to blow shit up.  We release the pictures and we lose on both ends.  People still think there’s a conspiracy, and we have an even larger wave of people vowing vengeance upon us.  So keep it under wraps.  Who in their right mind would assert that the President, the Defense Department, the Joint Chiefs, Congressional committees and the CIA would stage an elaborate hoax like this?

Rush Limbaugh asserts that bin Laden has been dead for some time.
Never mind about the end of that previous paragraph.  After stating this week that he thought bin Laden was actually killed at Tora Bora, he later backpedaled on that claim.  He did was he usually does… he makes some outlandish claim that gets picked up and repeated everywhere, but then says, “Oh, I was just kidding…” Meanwhile, his quote is being dittoed by his dittoheads all over the country.

But this does put the Republicans in a spot.  They have to choose between their knee-jerk reaction to criticize whatever Obama does, or try to claim credit for it.  Right now I’m seeing more of the credit-stealing.  The sad thing is that it will no doubt work on the people that want to believe it.  But it shouldn’t.

I’ll grant that the military apparatus is essentially the same, between the 2 Presidents.  Neither one re-invented Special Ops.  However, there are some differences.

Bush had 7 years to find Osama and didn’t.  OK, they may have “found” him at Tora Bora, but they were not properly equipped to capture him, what with Rumsfeld’s “light footprint” army.  Obama had him found and taken out in 2 and a half.

Bush took the focus off Osama and Afghanistan to go to war with Iraq.  Bin Laden was nothing but an afterthought for the last half of the Bush presidency.  Obama refocused resources specifically to find and kill al-Qaeda leadership, including bin Laden.  The CIA pays attention to what the White House tells it to pay attention to.  They’ve pounded the crap out of terrorist hiding places in Pakistan with drone bombers, and when the Pakistanis objected, he basically told them to go pound sand, which they seem to have in abundance.

Remember all the rhetoric the Republicans used against Obama, both before the election and after?  He dithers… can’t make the hard decisions… he makes America weaker… he keeps America from leading… he relies too much on other nations… he’s too close to the Muslims…

I think the President answered his detractors this week: 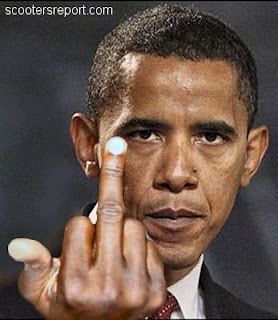