The Bluzdude Rules of Vegetables

While I’m out here in Ohio eating enough grilled meat to choke a horse, I’m reminded of one of my earliest posts, in which I discuss, quite rationally, my likes and (mostly) dislikes regarding vegetables.  Just in case you think I’m arbitrary in that matter…
I read last week that not only do fruits and vegetables not taste as good as they did in your grandparent’s day, produce today is 5-40% lower in minerals than those grown 50 years ago.

I don’t have anything against fruit. They make candy, cereal, and Pop Tarts in fruit flavors, so it must be pretty good. Even the Vitamin C tablets taste good, kind of like a fortified Sweet Tart.

Vegetables, on the other hand… well… have you ever heard of Frosted Spinach Pop Tarts? How about Tropical Broccoli Lifesavers? There’s a reason for that. 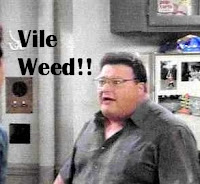 Vegetables are evil and I’ve never trusted them. Now I find out they’re losing whatever scant upside they had to begin with? The only reason Moms have now to force-feed the peas to her horrified offspring is just to see the look on their faces.
It seems as good a time as any to revisit some of my “produce” from the past called: “The Rules of Vegetables”. I know that this blog is too new to be starting with reruns, but my plan all along was to bring over some of the favorites from the old site.  (Yes, this is a rerun of a rerun.  So sue me...)
People have always called me a fussy eater, especially when it comes to vegetables. I never thought so, but when confronted with the evidence, I had to scramble for logical reasons why I like what I like. Thus was born the Rules of Vegetables. For the longest time, it’s just been something I’ve explained to people, as a kind of performance art, but recently a friend asked me to forward it to one of his friends, and I realized that I had nothing to forward. I rectified the situation and now I proudly present, “My Rules of Vegetables.”
My Rules of Vegetables
1. The more syllables there are in the name, the worse they are.  The good veggies have 1 syllable… Peas, beans, corn.
· Veggies with 2 syllables are good raw, but not cooked… carrots, peppers, spinach. (even Popeye didn’t cook his spinach.)
· After that, the more syllables you add, the worse they become… asparagus, cauliflower. Any vegetable that gets compared to a boxer’s ear can’t be good for you.
2. There are several conditions that act as “multipliers” of badness. The more of these conditions that are present, the worse the taste of the vegetable.
· Veggies that end in a vowel… broccoli, zucchini, origami. There must be something especially potent about a double “C”, which makes broccoli into my personal kryptonite.
· Double letters… Brussels sprouts, eggplant. Regarding eggplant, I could also add that purple vegetables are also bad, but I don’t want to sound petty, or biased against “vegetables of color.”
· Any veggie with a “Q” in it. Or as I call it, “The Squash Rule”. This rule also encompasses any little used letters, like “Z” or “X”. I don’t know if there are any vegetables with “X” in it, but if there are, I’m sure I won’t like it.
My Rules of Meat
The rules of meat are much simpler, and hark back to a simpler time when the menfolk found themselves hungry, they left the cave and went out a’huntin’.
1. Meat is Good.
2. Organs are Bad.
I’m quite certain that when the pack went out and brought down a mastodon or something, that the roasted the meat right there on the spot. This routine became the earliest know evidence of “grilling out”. (And the one thing that always helped get the fire started was the mastodon’s bushy tail, hence the enduring term, “tailgating”.) 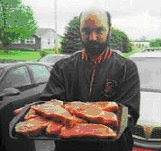 Everyone participated in the hunt, except the women and, of course, the French. So when they realized that they ate all the meat out there in the field, they looked for something they could bring back home to the missus. Now, they knew that bringing home nothing but the oddly shaped and weirdly colored scraps would get them a real ration of grief, so they figured they’d better come up with a plan.
So these wretched leftovers were presented, with great reverence and fanfare, as “the best parts, the parts where all the nutrition is!” (This is also the birth of “Marketing”, as we know it) This pre-historic bait and switch took hold right down to our DNA, and the remnants remain to be seen today. Next time you’re at “Henri’s Bistro”, just take a look at who’s ordering the pancreas, and who’s serving it. And you can just smile knowingly, as you order the pork chops. With corn.
Posted by bluzdude at 7:00 AM