I made it into town without any trouble, although on the plane, I did have cause to add one more item to The Book of Bluz:
Bluz 3:24 - The second some kid on the plane starts screeching will be the very moment they announce that you have to shut off all electronic devices and take off your earphones.
But why quibble?  My flight was uneventful and on time.  My buds met me at curbside within minutes of my arriving there.  We had a car-full this time.  Instead of being picked up by one gorilla in a tweed jacket (John, while on the road for his work), there was John, his grandson Gavyn, Rik, and Rik's son Jacob.  I got the full monkey house.
The highlight of the ride home was determining who cut the cheese in the back seat.  After much interrogation, Gav finally fessed up.  Then later, as we were discussing other things, John said, "Something just smells funny."
From the back seat, Gavyn piped up, "Sorry Papa, that was me."
After a few deliveries and pickups of personnel (dropping off little Gavyn and picking up John's dad), we made our way to Shawn's Irish Pub to commence festivities.  As usual, we ate, drank and made merry.  As payback for the ride to and from Detroit, this one is always on me.  Still, I have to cackle at the ridiculously low tab.  God love small town prices.
First night, we just hung out in the garage, aka The Dad Cave, drinking beer and cranking up the music.  I woke up the next morning with a sore throat, from yapping all night long.  But there was a spring in my step because this was the day that we were having the big 50th birthday jamboree and hootenanny.  This year, John, Rik and I all turn the big 5-oh.  Technically, the two of them have already turned.  I don't turn until October, which means I'm not really old yet.  This is my payback for when they all turned 18 and could go out to clubs, but I couldn't.  Revenge is mine!
Before we could party, we had some chores to do.  After running out to pick up chairs and tables, John's brother-in-law Kenny and I went out to pick up the food, while Rik and John went for beer.
When we first envisioned our party, we were going to do a hog roast.  But as the date drew near, it occurred to Grillmaster John that it might be more fun to order up the food from a local BBQ house, than it would to stand over a hot pig for 7 or 8 hours, in 95 degree heat.  And so it was decided.  Kenny and I headed for City Q Barbeque and I can tell you, John did not overstate the yumminess.  We could smell the "Q" before we even got out of the car. 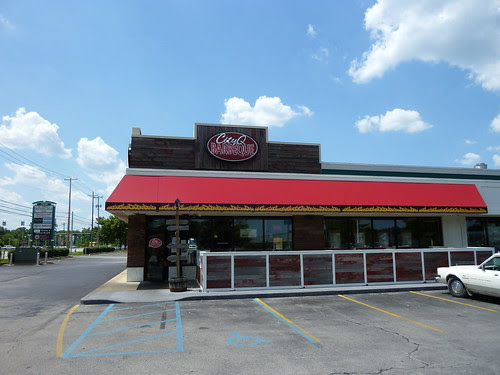 Sorry, you'll have to imagine the aroma.
We returned with 8 pounds of pulled pork, 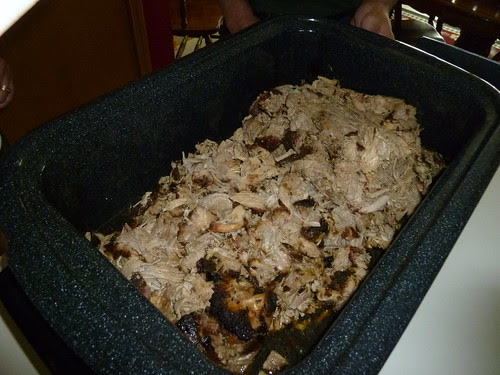 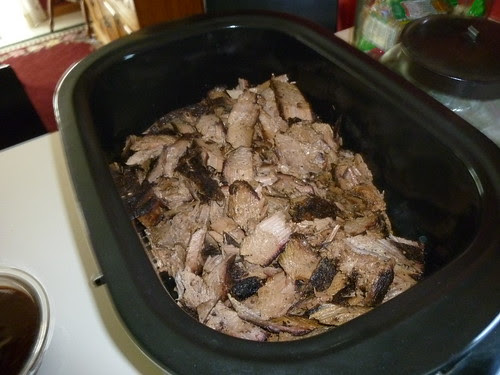 4 pounds of mac and cheese, 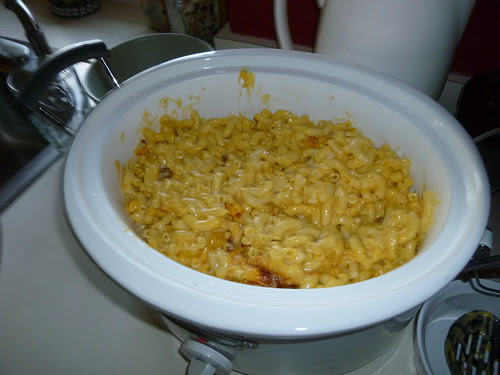 as well as 2 pounds each of baked beans and cole slaw.  Oh there would be a feast tonight...
Meanwhile, John and Rik came back with about 6 cases of beer.  (Plus, other people brought some as well.)  It didn't look like we were going to run short on food and drinks, that's for sure. 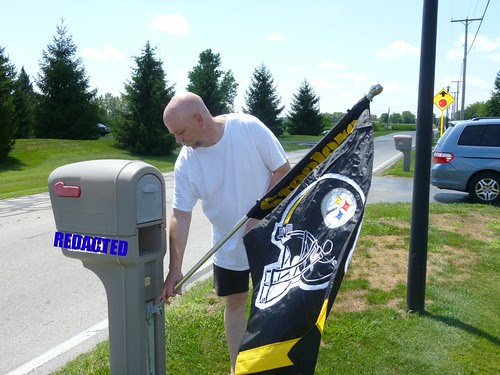 ...as if all the cars and people in front of the garage and the blasting music weren't a dead giveaway.
Last weekend I was sufficiently inspired to order up some tee shirts for the occasion and I had them sent straight here.  So we had our outfits all ready for us when Partytime arrived. 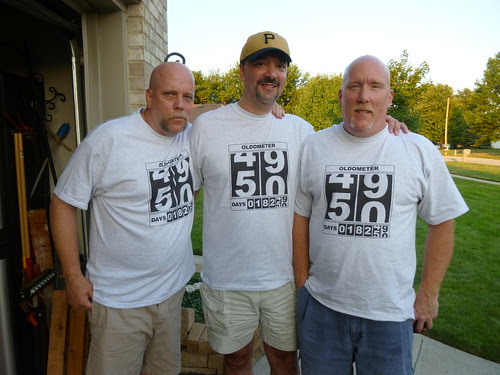 That's 150 years of mischief, right there.
Shortly after 4:00 the guests started rolling in.  This was a non-gifting affair, but Rik's brother Adam generated some smiles with this present for me.  Who knew he was this concerned about my failing eyesight? 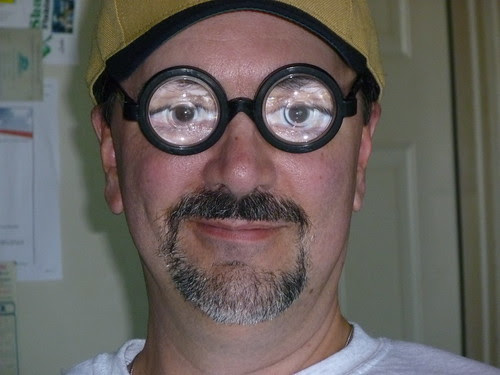 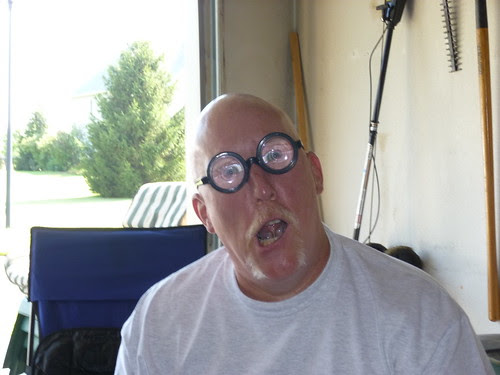 Obviously, some people got more into the spirit of these specs, than others.
More of Rik's family rolled in, including Kyrie, about whom I wrote last week. 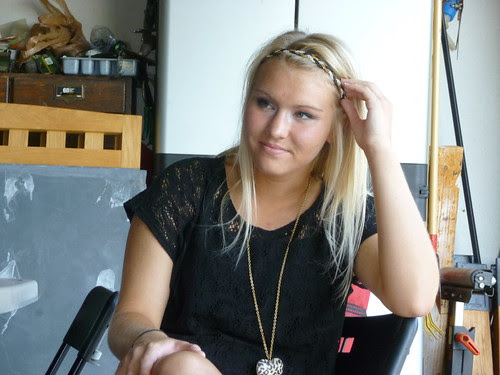 If she gets any prettier, I won't even be able to look at her any more.
Heck, even Gavyn knows what's up.  Sure he was giving hugs to everyone in the garage, but he must have hugged Kyrie every 5 minutes for the entire night.  Boy's got game... 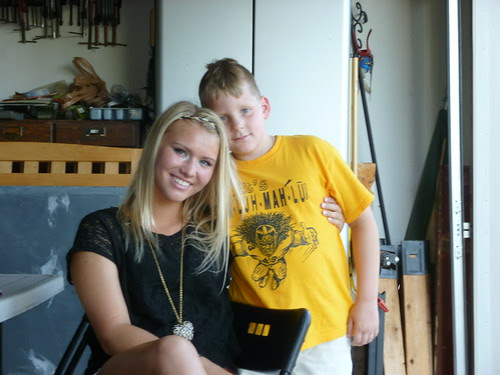 As co-Birthday Boy, I had to get some shared screen-time as well. 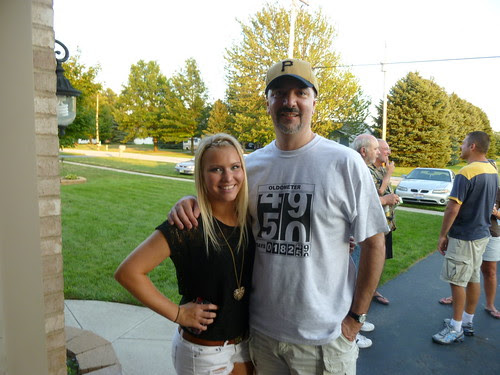 Bluz, hoping some of that hotness will rub off.
Rik's daughter Kia came by as well, bearing his Grand-baby #1, Ailey. 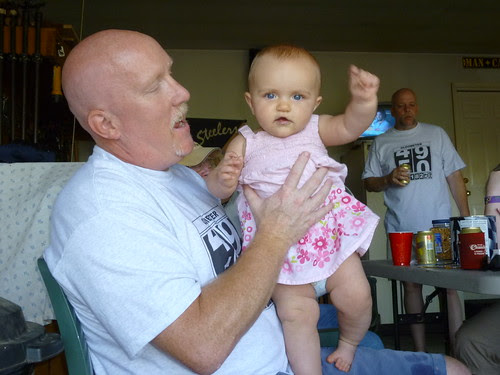 Commence spoiling!
John's wife Julie had a nice cake made for us. 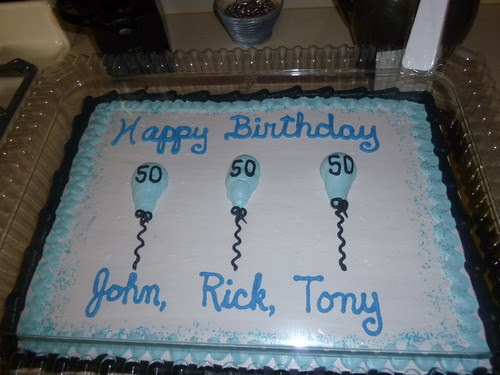 It was really good, although I didn't have any that night.  Way too full of baked macs, meat and beer.  Later we had a cigar-lighting ceremony in honor of our dearly departed friend Brill, who would have been 50 earlier this year.  After that, John broke out a real relic... a gold-plated CD of Boston's first album that Brill had given him 20 years ago.  He'd never even opened the cellophane.  We had his son Jay do the honors after John gave a short but moving speech.  Judging from all the moistened eyes in the garage, we still miss our buddy like crazy.
Rik was a little P.O'd that none of his friends around town bothered to come.  I told him it's sad that bar-sluts are so notoriously unreliable.  That didn't seem to help any.
None-the-less, we ate like kings, drank like fools and carried on until the wee hours of the night.  Jay brought a bag of (mild) fireworks, so the chilluns had big fun with the sparklers and with making things go BOOM. 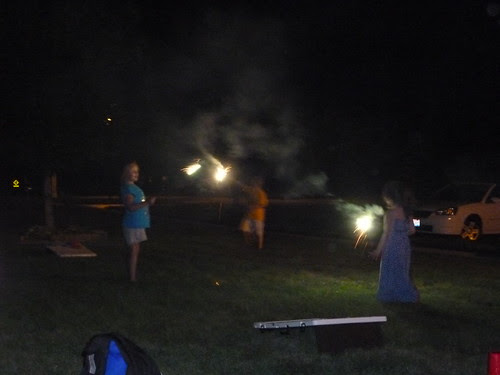 Meanwhile, we grownups sat around and shot the shit. 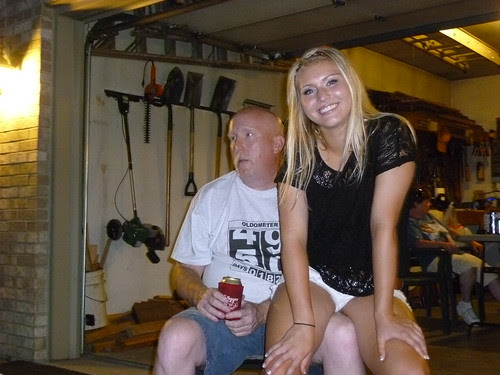 You're never too old to sit on daddy's lap.
I didn't get to bed until after 2:00 AM.  I am NOT used to being up that late, but time just seemed to have flown.  Needless to say, it was a lazy Sunday for all.  I wasn't out of bed until past 10.  I didn't even get dressed; we just watched TV all day and tried to dry out.
So obviously, it was a successful party.
Last night we went to see the Toledo Mudhens play; tonight we head to Bowling Green for some legendary Myles pizza.  Pics and details to follow later this week.  I might even get dressed for it.
Posted by bluzdude at 7:00 AM