Riding the Storm Out (The Morning After Update)

Yes, that’s two REO Speedwagon titles in a row.
This is my half-hearted attempt to live-blog Hurricane Irene.  Here’s how this will work.  I’ll put up intermittent posts under this title.  I’ll place the most recent ones on top, so if you’re getting here later throughout the weekend, it will make better sense if you read bottom to top, starting at the 3:30 update.  You’ll know when there’s an updated posting because I’ll note it in the title.
Should power go out here, I’ll tweet it from my phone and you’ll find that tweet on my right-side panel, directly under the About Me section.  Remember… I’m Planning Guy.


Morning After Update
Well, we’re all good.
The power went out some time overnight, but I don’t know for how long.  I knew by the time on my blinking alarm clock that it came back on around 3:30 AM.  When I got up to pee around 5:00, I checked the perimeter and saw that there were no signs of flooding.  It was still raining pretty hard and was windy.  Still, I went back to bed with piece of mind.
The rain stopped around 7 or so, I guess.  It’s still pretty windy out, but the standing water outside from yesterday is considerably diminished.  All in all, it’s the best result I could hope for.
Now, how everyone’s doing up in New York is another story.
This concludes my Hurricane Irene Saga.  I’d like to thank the several people that looked in to check on me during this crisis event.  So now you know the kind of high quality reporting that can be done, when one is besotted with spirits.
Like the Carpetbagger says, would that Wolf Blitzer gives it a shot…
Midnight Update
I took my own advice and watched Prisoner of Azkaban.  It still rocks.
The rain has been coming down hard for the last couple hours.  Finally getting some wind (no, it’s not me) but it’s not that bad thus far.  If this is as bad as it gets around Baltimore, I should be OK.
Pretty dog tired now… it’s probably the whiskey.  So I’m hitting the sack.  If I wasn’t good and drunk, I’d probably toss and turn, worrying about the storm.  But since I am, no worries.
See you on the other side.
9:15 Update
Just watched “Timeline,” mostly for the Scottish genius that is Billy Connolly.  It’s a story about a crew of archaeologists that go back to the 1300’s to rescue their professor that got trapped back then.  Turns out the guy that plays the Bill Gates-type character that owns the company that makes the time travel possible is the same guy that plays Professor Lupin in the Harry Potter series.  Perhaps that’s a sign for me to watch Harry Potter and the Prisoner of Azkaban next.
Still just a steady rain.  Nothing dramatic, just rain.  Usually around here, rain doesn’t last very long.  It just comes, rains hard, then goes.  It’s been raining steadily since this afternoon.  I worry about the power going out overnight and my place taking on water.  Of course, I worry about a lot of things.  In the end, what will be, will be.  Shit happens.
6:45 Update
Still a steady rain.  Starting to look pretty soupy out there.  Just as long as the soup stays out there! 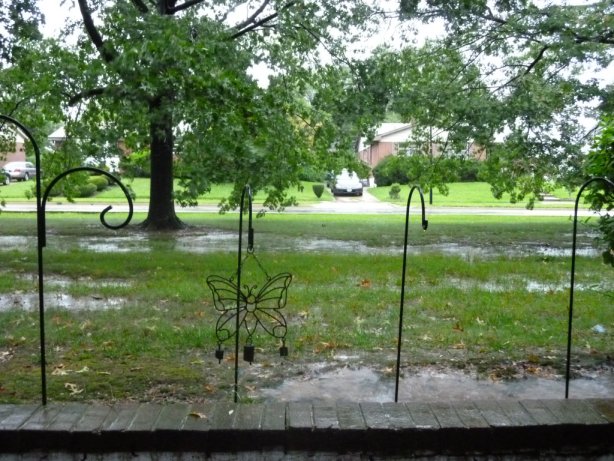 I’m ready to bail on Dexter.  Time to select an old movie… Something with a lot of SFX!  Popcorn movie!  I’ll have to let you know what I decide, y’know, after I watch it n’at.

5:30 Update
Naturally, the very moment I post that it's not coming down too heavily, it starts raining buckets. 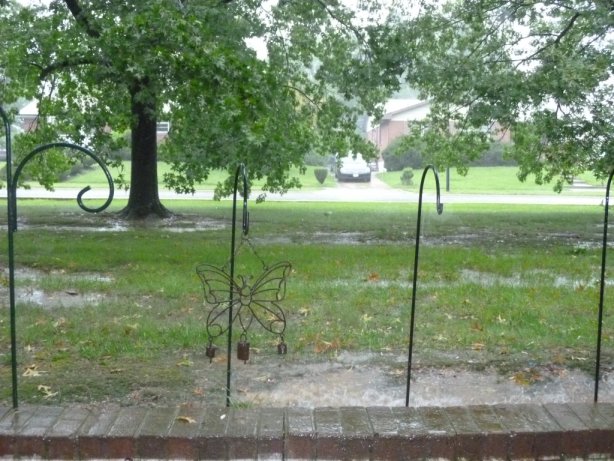 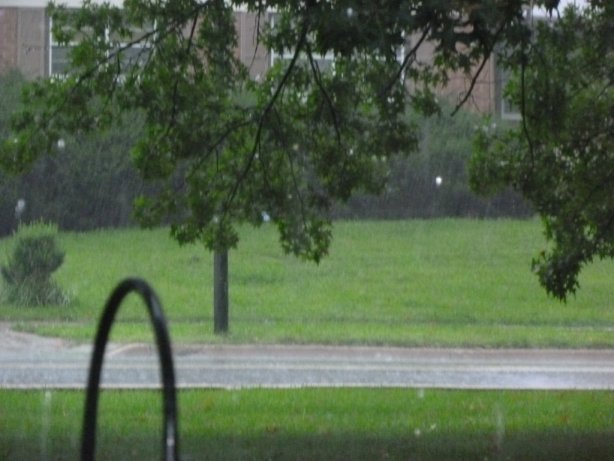 5:15 Update
It’s still just raining very steadily.  No dramatics… no sheets of rain, no whipping trees.  Just a rainstorm, so far.
After the prior update, I poured myself a nice stiff drink, using the Bluz Family proportions.  We never measure our drinks.  When we want Jack on the rocks, we fill a glass with ice, and then pour in the Jack.  I measured it out once, just to see how many shots were in one of my usual drinks.
Answer: 5 shots. 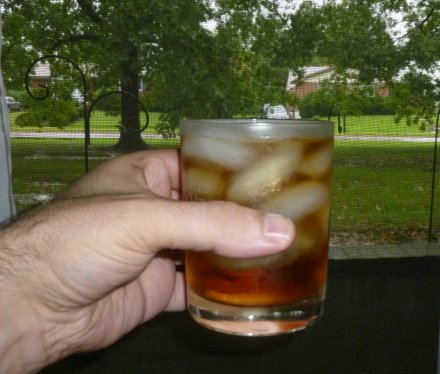 No wonder bar drinks taste so weak to me.
Anyway, after starting my drink, I realized 2 things:
First, these updates may not be up to my usual standards.  I’ve never drunk-blogged before.  Please forgive me if typos and mushy platitudes run rampant.  I promise I’ll go back and fix them in the morning.  (If we still have power.)
The second thing is, why on earth am I starting a new DVD series when I’m drinking.  I’ll have to watch all of them again because I know I’ll have forgotten the details by tomorrow?  Idiot…  I really ought to be watching old movies I’ve seen a hundred times before.  Maybe it’s time to watch Forrest Gump again.
3:30 Update
It’s raining in my corner of Baltimore right now.  It’s been raining on and off since around 1:00.  So far, it’s just an average rainstorm, but the outer bands are only beginning to affect us.
I’m mostly concerned with flooding.  For hurricanes Floyd and Isabel, both of which ran up the east coast, I had water rise up through my floor and saturate portions of my apartment’s carpeting.  The landlord replaced it, but it’s up to me to stuff all my furniture into the kitchen and bathroom.  It’s a bloody pain in the ass.  I’ll be looking for that this evening, but I worry that it will happen overnight.  I may go to sleep in the bedroom, but wake up having floated into the dining room.
Up until this May, my job involved “COB,” or Continuity of Business.  Parts of that job entailed tracking the path of hurricanes and making sure our branches that were in the storm path, were prepared.  We’d conduct conference calls every day to make plans beforehand, and assess the damage afterwards.
Unfortunately, my department hasn’t yet hired a new “me,” so with my old boss on vacation this week, it fell to me to handle the entire hurricane prep myself.  Lucky me.  But that’s been the running joke… anytime he takes a vacation; it’s guaranteed that we’ll have a hurricane.  Or in the case of this week, we have an earthquake AND a hurricane.  Gah!  It’s been a rough week.
But I heard the line of the week on Thursday.  Right after we sent out our building-wide hurricane personal prep email, I heard someone on my floor take it to heart, saying “I’m gonna get my preparedness ready.”  She meant that shit.
I got my preparedness ready too.  Check out my power outage supplies: 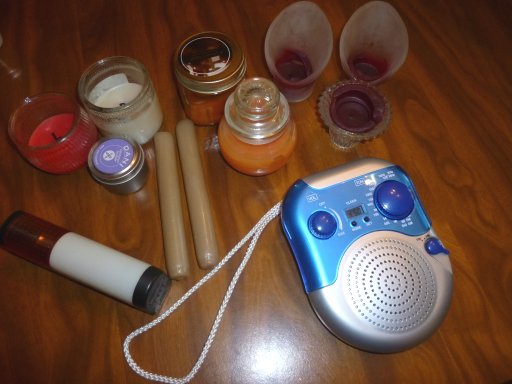 I’m about 4 candles short of a Sting video.
My parents live on the Florida panhandle so while they are not affected by this storm, they have a hurricane survival bin filled with supplies at all times. 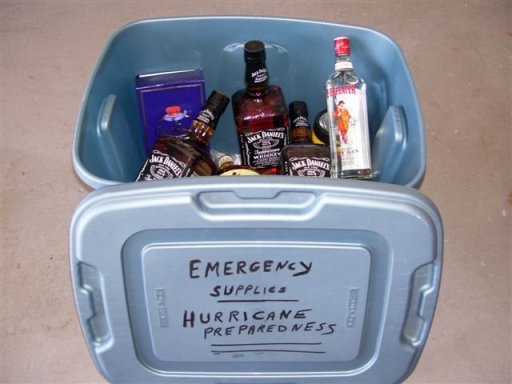 I wanna ride the storm out at Dad’s place.
In the meantime, this is what our current conditions look like, off my back porch. 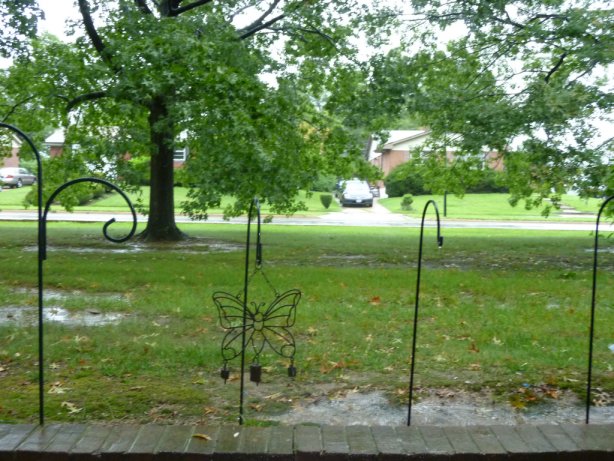 My apartment is about 3 feet below the ground.
So I’ve got beer laid in for the weekend, and in case of emergency where the power goes out and I don’t want to deal with warm beer, I have a small bottle of whiskey.  Not exactly up to my Dad’s stock level, but it will do for a long weekend.
Even though I should probably be working on cleaning up all the perishable food in the house, I nevertheless ordered some Chinese takeout.  That’s dinner for today and lunch tomorrow.  I also got my shower in, in case we have a problem with clean water.  I have several jugs, pitchers and 2-liter plastic bottles filled with water.  Cell phone is charged, MP3 player is charged… hey, I could have music after all… not only do I have a stash of batteries, I can cannibalize more from my various remotes.
The mailman delivered my Season 5 DVD of Dexter this morning, so I know I’ll have something to do tonight… unless, of course, I lose power.  I hate that.  No TV, no PC, no music, too hard to read by candlelight.  There’s nothing left for me to do but drunk-dial people from my land line.
But I am saving an activity or two for a power outage.  I still have to do my PT exercises.  Don't need any juice for that... Just me and my Jillian Michaels hand weights.
If I had a smarter phone, I could entertain myself with that, but I’m still rocking the dumb-phone.  Such is the price I pay for remaining in 2006.
Posted by bluzdude at 3:49 PM