Tales from the Strip Club

Ever since I mentioned my frequent trips to “The Sewer” (which is how my friends and I referred to the row of strip clubs near where I used to live in Cleveland) in my The Younger Me post, I’ve wanted to do a post solely about those experiences.

As much as I consider myself a liberated, pro-feminist dude of the 21st Century, I humbly admit that there was a time in my life that I used to go to strip clubs.  I’m not proud of it, nor am I terribly ashamed either.  But I always thought that the strip club culture was a rich vein for mining, be it for a book, a sitcom or TV drama.  (There have already been movies, but nothing that was any good.  Sorry, Demi.)

As I mentioned in The Younger Me, the clubs I went to in 1986 Cleveland were mostly “bikini bars,” where girls would dance on stage in skimpy costumes before stripping down to a bikini top and G-string.  Usually it was a 3-song or 15-minute set up on stage, then the dancer would come down to the tables to make her rounds.  She’d dance a bit for each guy, who would then tuck a dollar into her garter or boot or whatever was available.  (And no, you NEVER tried to put a bill anyplace it didn’t belong.  That would earn you a guaranteed bum rush out the door.)  Sometimes she’d sit down and chat with you a bit, especially if it was slow.

Some places had a DJ, other places had a ‘house stereo’ and others had a good old-fashioned jukebox.  The latter option sucked, because the house made the dancers feed the jukebox and they, in turn, came to the customers.  Personally, I hated the fact that the nature of the jukebox limited song choices to only those songs that appeared on 45’s.  (Remember, there were no CD jukeboxes yet.)

Before I moved out there, I had never been to a strip club.  We used to make jokes about the one we knew about in Toledo, “The Jolly Trolley,” but I’d never actually gone.  Too much other stuff to do, I guess.  But after being transplanted to another city, with no real companionship but for some other fellow record store managers like me, the proximity to The Sewer combined with the newness of the experience was attractive.

After sampling a number of the establishments, we quickly found a place we liked best and made it a semi-regular hangout.  Just as quickly, we each found dancers that we particularly liked.  Hell, I felt like a kid in a candy store, because when I came in there with my friends, hot chicks would be all over us.  It certainly helped to keep going back to one place… the dancers there would get to know you, or at least know that you’re harmless, or pleasant to talk to.  Obviously they make note of your financial situation and spending habits too.  As my friend Pamela used to say, “Sista gotta eat…”

I think that the thing I found attractive about the situation was that in the strip club dynamic, the girls would come to me.  That’s such a help to a guy that’s shy and has limited “game.”  To me, approaching and breaking the ice was always the hardest part.

I really learned a lot about the strip club culture during my Cleveland years, which would serve me well later.  Mostly, I learned from all the shit I did wrong.  Here’s what I can say now:

Expectations:  Keep them in check.  Do not go to strip clubs looking for a relationship.  To the dancers, guys are the customers and in almost every case, that’s all they’ll ever be.  It’s too easy to confuse the attention that dancers are trained to show customers, with actual feelings and affections.  It’s not that they can’t have them, it’s just very hard to know where the “business” stops and the “personal” starts.  Misunderstandings and hurt feelings are highly likely to develop.

Increments: You CAN forge a personal relationship but you must approach it incrementally, like the way you would care for a stray cat.  You make nice slowly, leaving food out, staying nearby but non-threatening.  You don’t know what kind of life it has led before, so it may bolt at any second (and possibly scratch your eyes out.)

Single focus:  Don’t have one.  I made a mistake in focusing on one dancer in particular and while I was never rude to any of the others, it was obvious whom I liked. (The one I asked out via napkin note, as referenced in The Younger Me.)  I probably looked at her the same way Pepe LePew looks at that little black cat with the white stripe painted on her back. 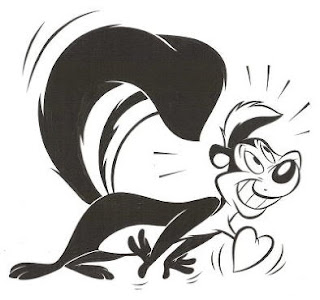 By the time I found out that there was a dancer that kind of liked me, I’d already made her feel like a 2nd class citizen because of all the attention I paid to the original target of my affections.

Money trumps all: No matter what the relationship, the dancer will always seek the money.  If some douche is making it rain in the far corner, you’re pretty much out of luck for the rest of then night, unless you have your own pile of dough.

Drama is bad: That’s another reason dancers don’t like to get personal with customers.  It doesn’t take much for a guy to get all jealous and make a scene.  That’s bad for business.  Plus, if you think you have a shot, you’ll keep coming back.

Eyes up:  Check them out when they’re up on the stage, or performing for someone else. Treat them like a human, not an object.  Some guys could just look a girl up and down, or just stare at her tits.  I never could.  So when a girl would come by for tips, I’d always look at her eyes.  Sometimes they’d be unnerved because they weren’t used to it, but most appreciated it.

See, I went to the strip clubs for weird reasons.  In Cleveland, it was a fun group activity plus it was all new to me.  It seemed like harmless fun.  There were occasions where we tried out the slimier places… topless bars, full nude places, but I always left there kind of skeeved out. Our regular place seemed happier and less pervy.  The only time I ever went alone was when I was chasing that one dancer and that didn’t last very long.  Then after a year or two, my buddies began to fall away… one got fired, the other moved back to Toledo.

By this time I was more established in the record retail community and was learning my way around the city.  Cleveland had a thriving music scene so there were a lot of opportunities to go out and do stuff.  I found a nice neighborhood bar to go to as well.  I’d go there after work and write in my journal.  They had great hot wings that were very affordable, considering I wasn’t buying beer any more at titty-bar prices.  I really didn’t need The Sewer any more.

Then I moved to Albany in 1990, to run a big mall store near our company HQ.  Now THIS was a big move.  I was brand new in a strange and far away town.  There was no group of people landing there with me as there was in Cleveland and now I was way too far from home to just hop in the car and go visit my buddies.  I was completely on my own.  That’s when I started going to a strip club again.

To be continued…
Posted by bluzdude at 8:47 PM