Last night, I spent some time picking through the detritus of a former life.  I excavated my old journals from the mid-1980s.  This was the time period immediately after I had moved out of the Bowling Green Apartment, up through moving away from my ‘home base’ for the first time and going to Cleveland, culminating in the Whatsername Saga.  I was 25 to 26 years old.  And a pinhead.
Have you ever read through old journals, a really long time after writing them?  There was so much there that I couldn’t remember… Names and faces of people that I’d hired and worked with, restaurants I’d eaten in several times a month, even girls I’d attempted to date.  (Obviously, unsuccessfully, otherwise I’m sure I’d have remembered more.)
I spent waay too much time in the journal focusing on things that were going on at work.  I know I didn’t have very much going on in my life, so I had to write about something…  When I moved to Cleveland, (Parma, specifically) I did so to become a record store manager. 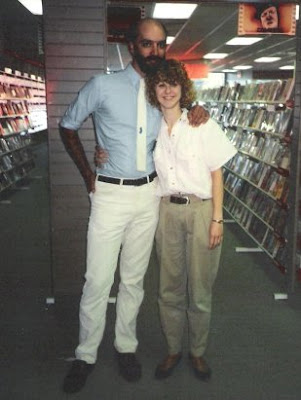 Store Manager Bluz visits with the Dragon Lady, circa 1989.
Note: that is NOT Whatsername.  The Dragon Lady was a good friend and mentor.  We started working together in Toledo, went up through the management system and both ended up running stores in Cleveland.  I just used this shot because A) I don’t feel like firing up the scanner to download a better one and B) Damn, I was skinny then.  And stylin’!
Posted by bluzdude at 9:05 PM

2. Bluz, you were (and still are) quite the stud. You know you'd be SUCH a hipster today in those white pants, right?

Damn, Bluz, you were blogging old school style before blogging was cool. (It is cool, right?)

If only you would have flashed the Manager of the Month plaque at that stripper. Bow chicka bow bow!

Mrs. Bachelor Girl
I’m pretty sure I spend the 2 C’s on strippers and blow.

Nah, I just wanted to sound like Charlie Sheen for a second. I think I spent it on stereo equipment and CDs. At that time in history, CDs were brand new, so I had my entire album collection to replace. The hardest part was waiting for particular albums to be made into CDs. Seemed to take forever before some of my favorites became available.

And I have never been anything resembling a hipster. If there was a trend, I was that last to know because I was too damned busy. (Although you should have seen me in my white overalls, in college.) But I did look good then… I was on the Retail Manager Starvation and Stress Diet. It works. I probably dropped about 45 pounds between 1987 and 1989.

Carpetbagger
I KNOW, right? I had that Manager of the Month swagger goin’ on… I was a catch! Of course, I had no idea what I was doing. I got much better at strip club life when I was up in Albany. Like I said, my days frequenting the strip clubs deserve their own post. (Man, I should have dug out my plaque and posted a picture. I would have but I know it’s buried in a box, deep in the recesses of my back room.)

And I agree that journaling is totally a precursor of blogging, only with blogging there is a chance that someone besides the writer might actually read it. Although with a journal, I think the writing is much more personal and brutally honest, because you know that it’s only for yourself. The more people that read a blog, the more one’s thoughts get filtered through how one thinks they’ll be perceived. I’m not saying that a blogger will be more inclined to “lie” as much as ‘omit’ certain things. A blogger may also take steps not to offend readers, whereas in a journsl that’s not an issue. (If you offend yourself through your own writing, seek therapy!)

I hate to go all Dr. Phil, but the most important thing is that you actually see growth. Everybody's priorities change, but not always for the better. As for the strip clubs, well, I think at this stage in my life, my fiancee will be much happier if I don't post about those misadventures anytime soon. Cheers!
-brandon

Bluz, I just love it when you go all introspective on us! We probably know way more about your life than your little mama does! And just look at how you've grown over the years! No! Don't take that the wrong way! You've grown MENTALLY!!! You are still the stud you were back in the 80's, especially when you wear that hat you wore at the beach last summer!

DG
Indeed it is. I used to have such a complex about ties. I was always so worried that my tie wouldn’t “go with" whatever I was wearing. So since I knew so little about what constituted “going with,” I tried to cut down on as many variables as possible by only wearing solid color ties. And the knit ones were pretty durable, given all the grungy work I was sometimes called upon to do. So I had about a half dozen single-color knit ties, with a couple of other cheap silky ones thrown in. Eventually, I got bold enough to buy a couple that had a few stripes.

When I finally got a job at our home office, I was really worried about not clashing, because I knew I’d be rubbing elbows with people that DID know how to dress themselves professionally. But the worry didn’t last too long, because shortly after I got there, I spotted my boss, the VP of Merchandising, wearing a loud Mickey Mouse tie.

From then on I stopped worrying about it and, in fact, began my pursuit of interesting ties to wear. I tended to like the ones that had something identifiable on them, as opposed to just patterns. The irony now is that I have a tie rack with about 50-60 wild-ass ties on it, but now work in a “business casual” office. I only wear ties for weddings and funerals.

In a future post, I’m going to have to take some pictures of my coolest ties… Of course, “cool” is totally in the eye of the beholder. At least I don’t wear my “fish” tie any more, although it IS tacked up outside my cube.

But admit it… I’m rocking that white tie with the white slacks… And if you could blow up the picture, you’d also see that my tie-tack is a Bon Jovi pin in the shape of New Jersey.

Brandon,
Yeah, looking on the 1986 me is like looking at the Bluz Beta test. Still needed to be debugged.

Judie,
No one beats the Bluzdude for navel-gazing, that's for sure... I think Lil' Mother learns all about the far away, mystic and mythical periods of my life the same way you do: by reading about it here.

We used to talk on the phone about once a week back then, but I don't recall getting too detailed about the day to day crappola I was going through. And I definitely didn't say much about my dating life. Just the highlights, as in, "Hey I went on a date." And a week later, "No, I'm not seeing her any more."

My oldest son, Jeff, kept his life pretty much a secret, but middle son Joey always told me everything, and I do mean everything!! He probably went a little overboard, like the time he came in with photos of himself posing in the nude for uiversity art students. He was pretty proud of the $50 an hour he got paid! Later, he realized it was a mistake to show me those photos.

I never said you weren't rockin' it! You definately are.

I'm with MBG. You were a stud! Still are. I know this because we're real life friends.

On another note, I'm sure you were quite the gentleman in the strip club.

Cassie,
Of course I was a gentleman. That was my “hook.” Unfortunately, it would have been a much more effective hook if it was combined with a secondary tendency to have my pockets stuffed with $20 bills. (I know they would have to be $100s now, but this was 1986.) But a rich asshole always got much more attention than a gentlemanly retail manager being as generous as he could afford to be. Sad but true.

Yeah, I’ll have to do a strip club post. “I went to strip clubs for the conversation” will be right up there with “I get Playboy for the articles.”

One of my biggest lifetime regrets is not keeping a journal. Not only would it have shown where/who I was then and where/who I am now, but it would have provided excellent fodder for my blog.

Dragon Ladies aside, I think you've turned out pretty damn fine at fifty.

Sherry,
God forbid I ever unearth my high school journal, covering 10th and 11th grades. There's enough material in there to humiliate myself online for months.

There's one problem with doing these kinds of posts: you become susceptible to this:
Blogger's Disease: An illness where one begins to think that everything that happens in his life is as fascinating to everyone else as it is to him."