Tales from the Strip Club Part 2

This is a continuation of the story I started in the last post.  If you’re finding this first, you should start at the beginning by either scrolling down or clicking here.
After moving from Cleveland to the Albany area, I found a little club that wasn’t too far from my apartment in Schenectady and would go for a beer and relax there, maybe once or twice a week.  I started going there around autumn of 1991.  This place was similar to my hangout in The Sewer, except that the girls were topless by the end of their set.
I tried finding another neighborhood bar, but no one ever talked to me in the places I went.  It seemed very clique-ish.  But at the strip club, I could come in after a hard day’s work and pretty girls would come and talk to me and bring me beer.  Best of all, they didn’t want anything from me, (other than $1 bills) which was a pleasant change from my daily grind at the store. 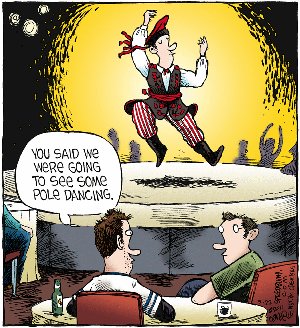 This was today’s panel of “Speed Bump,” on the newspaper comic page.
Using my hard won knowledge from my time in The Sewer, I managed to befriend a couple of the dancers.  When they’d come by, I’d talk to them about the music they liked or what they danced to.  I made sure they knew I had access to all kinds of music.  That really helped break the ice.
One night, I noticed that one of the girls was dancing to a really beat up Bad Company cassette.  You could hear the sound fade in an out, the way overplayed tapes do.  So the next time I came in, I brought her a new Bad Company tape that I’d made myself, professionally assembled on my mixing board at home.  This was a very big hit.
Of course there was one girl in particular that I liked… Jackie.  She was a lightly freckled green-eyed blonde who wore her hair so that it often fell down over one eye.  Through repeat visits, we became friendly.  We liked a lot of the same music so we always had that to talk about.  I made a number of tapes for her, the best of which was a music masterpiece.  Their sets were 4 songs at a time, so I knew the drill and I could pace it just right… upbeat intro song for pole-dancing, song for peeling off some clothes, slow song for working the floor, etc.
One of the songs I included was one of my favorites; Gary Moore’s “Still Got the Blues.”  (It was current, at the time.)  I loved watching her dance to that… she was smokin’ hot.  And the reason that I know she really liked my handiwork is that sometimes I would hear her playing it when I was just walking in.  I knew she wasn’t just putting it on just for my benefit.  She was dancing to Still Got the Blues one night and caught me with my eyes closed, just grooving on the guitar solo.  Busted!  She said to me, “You’re not even watching me, are you?  You’re just into the song!”
So on nights I’d close the store and had the next day off, I’d go there after work and often stay late.  There’s a lot less competition for attention at the end of the night.  On one of those nights, Jackie flopped down in a chair beside me and went, “Oh, my feet are killing me!” as she began unlacing her boots.
Before I knew what I was doing, I’d scooped up her foot, and pulled off her boot and began administering a first class foot massage.  She practically melted right there.  Now, I had no idea what I was doing… I’d done many back massages in my day, but nothing with feet.  But it seemed to do the trick.
“This is better than sex!” she said.
I answered, “Depends on the sex.”
She said, “Depends on the massage.”
I was thinking, “Shit, now if we ever get together, I’m going to have to top this…”
I think I said something like, “You should see what I can do with the rest of you.”  So smooth, I know.
It’s hard when you start to get attached to a dancer, just because of the nature of the business.  Sometimes I’d stop in but she’d barely be able to say hi.  It could be a bachelor party or a particular friend that was commanding her attention, but it was OK… I would never cause a scene.  I was fine as long as I knew that it was nothing I did.  (So paranoid, I know.)
But the worst times were when some asshole would start getting mouthy, grabby or disrespectful.  Guys can say really hurtful things when they’re liquored up, especially when they’re in groups.  The girls that work at these places aren’t there to be receptacles for unreconciled mother issues masquerading as abuse.  They’re not emotionless.  Comments hurt.  These are women that are doing what they have to do in order to care for their kid at home.  (I don’t think I ever met a dancer that didn’t have a child she was raising.)  They didn’t need that kind of shit from some walking hard-on.
It happened to Jackie once when I was there.  I could see Jackie “The Professional” handle it well.  She maintained her dignity and breezed off the stage when her time was up.  But I knew Jackie “The Girl” was crying in the dressing room.  I tried to cheer her up when she eventually came back out, but there’s really only so much one can do.  Try to rebuild the confidence, maybe.  But it killed me to see the hurt in her eyes.
Anyway, I kept coming back and eased into a comfortable relationship with a number of girls there.  It got to where I’d have a dollar out on the table when the girl would come down to dance and she’d say, “Oh, I don’t want your money,” and I’d say, “And you don’t need to dance for me.  Just sit down for a minute.”  Then we’d yak for a bit, she’d go off to the next table and I’d feel like a million bucks.
But you all know me.  Could I let it stay there?  Of course not.  I had to go and try to date Jackie.  It almost worked, too… which is a story for the next post.
Posted by bluzdude at 7:08 PM

Foot massages ARE almost better than sex. Especially when you're exhausted and feel like crap.

Looks like a missed opportunity for a big career: DJ BluzD!

"Still Got the Blues" is almost enough to melt any female. Good try, Bluz!

Jessica
Foot, back, scalp, whatever. I was just happy for the opportunity to put my hands on her somewhere, without getting smacked.

But I can certainly understand how her feet must feel after having to dance around all night in high-heeled boots. I complain if I have to wear dress shoes and stand up at the same time.

Carpetbagger,
That’s pretty close to the truth, right there. Much later, when I was married but under-employed, I auditioned for a job as a DJ/Emcee at a strip club. I plan on working that in later. (Obviously, I didn’t get the job, or I’d have written about it long ago.)

Cher,
It sure melted me… She did a really good job with it. In the places I used to go, all the girls could really dance. They didn’t just get up there and shake their stuff… They put on a performance.

Bluz, you were obviously a breath of fresh air for a LOT of dancers. For some of them, you were probably the only reason they didn't become penis-amputating psycho killers.

Mrs. Bachelor Girl,
Well then, I’m glad I could do my part on behalf of disenfranchised dancers everywhere. I had no idea I was so selfless.