Tales from the Strip Club Part 3 - Dating a Dancer

This is a continuation of the story I started in the last two posts.  If you’re finding this first, you should start at the beginning by either scrolling down or clicking here.
I began developing a friendship with Jackie throughout the fall of 1991 and into December.  Now, with my prior strip club experiences in The Sewer, I was aware that dancers like to make it seem that they just might be available, if you keep coming by.  So I was constantly scrutinizing every interaction, looking for signs of genuine feeling or fondness towards me. 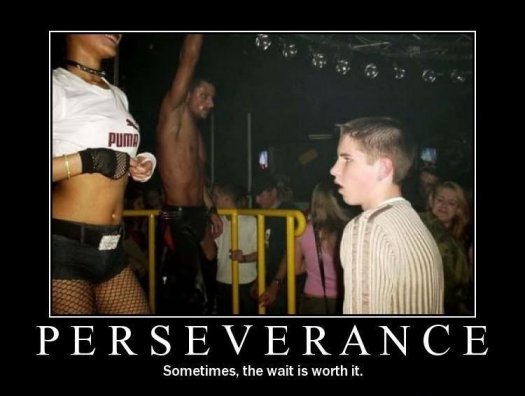 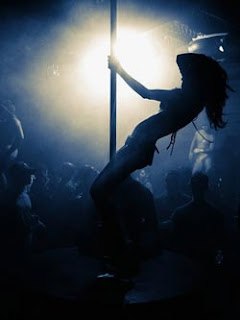 I’ve often wondered what may have happened if things had turned out differently, although I really shouldn’t romanticize it.  The most likely outcome would have been nothing more than frequent trips to the clinic.
Quick final thoughts on strip clubs are coming with the next post.  I meant to sum up here, but like usual, I went on way too long already.  That always seems to happen when I have tangible documentation available.  Just as things were starting to heat up with Jackie, I began documenting the adventure because I knew it would be noteworthy, come what may.  I wasn’t journaling at the time, so it stands as kind of a one-off chapter.  I have all the he said/she said.  I have that phone message that was waiting for me at the store.  And of course I still have the picture.
Posted by bluzdude at 12:34 PM

And here I was thinking you met future ex at a strip club... Mainly because the way you talk about her, she seems like she'd belong there. Well, except being far too clumsy (something about being stuck and firemen having to rescue her in the laundy room?)

I love when you tell stories. My favorite of your blogs.

Sorry she broke your heart. But at least you have an incredible tale!

Miley,
Future-Ex was never the strip club type, even in her wild, younger days. And she totally would have gotten dizzy from spinning around the pole and fallen off the stage.

DG,
Thanks! Such is the benefits of a misspent youth.

Yeah, it was tough at the time, but I went into it knowing that odds of a happy ending were about 15%. So I was OK. I just wonder whatever happened to her. Maybe I should look her up on Facebook! (not)

I wouldn't be able to handle anything past a 1 inch heel so I can't even hate on your ex for getting dizzy and falling. I fall FAR too easily. That's why I am poor. Can't be a stripper.

I love this story.

All I keep hearing in my head during my time reading was, "I'm in love with a stripper."

Miley,
Maybe "High Class Escort" would be more your speed.

Cassie,
What, the pain of unrequited love amuses you? Believe me, I got a million of'em. Of course, not all of them were this well documented.

That was a really interesting story. Like you said, probably for the best that it didn't work out. Sharing your girl with other guys so she can make money would be no fun at all.

Bluz, if I had been a stripper back then, I certainly would have gone for a guy like you! Unfortunately, I am a horrible dancer with a poor sense of timing.

Well, Lizzie's head no longer looks like a softball, so I guess she's on the way to recovery!!

Jessica,
Truthfully, that would have killed me. I think that's the first thing any guy wants to do after beginning a relationship with a dancer... get her to stop dancing. Perhaps if I'd have been in a different place in my life. Unfortunately, I was just barely able to take care of my own self.

Judie,
Strippers never go for the 'nice' guys. It seems to be rich guys or bad boys, and I was neither.

Poor Lizzie... I hope you told her to leave the rattlesnakes alone from now on.

I love this story because you DATED a STRIPPER. Not because you were in pain! You should know me better than that :)

She totally wasn't for you and I'm so glad that you knew better. You're too good for that BS.

Cassie,
I know, dear... I was yanking your chain too. Between the both of us, I think we yank enough chain to make Quasimodo jealous.

But that reminds me of that old saying (that I saw in an email somewhere): No matter how gorgeous and charming a girl may be, there's a guy out there somewhere who's sick of her shit.

I must say, this story went further that I thought it was going to.

1.) Would have been awesome if her real name was Cinnamon or Destiny.

2.) Wasn't this like a year after Pretty Woman came out? Was that somewhere in the mix? Being Richard Gere without all the money, the great hair, and the gerbils?

3.) I spent that Super Bowl high as a kite on pain killers after throwing out my back in a basketball game. (Has to do with nothing. Just remarking that your only Super Bowl spent with a stripper was also my only experience with hallucinogenic pharmaceuticals.)

I had a friend who worked as a stripper. She worked in some SEEDY places, but the last place she worked, she asked me to come visit her one night when she was waiting, rather than dancing (because she wouldn't have time to visit if she was dancing - "waiting" really only meant making sure the men had change and popcorn). I was a little nervous walking in, but once I did I had a great time meeting all her coworkers. They were all very nice and not at all what I was expecting.

Carpetbagger,
And here I was hoping it would go just a leeeeeetle further… As to your points:

1. That would be so cool… a girl named, Porsche, for example, who danced under the name Jane. “Jane Jane the Dancin’ Machane!”

2. According to IMBD, Pretty Woman did indeed come out in 1990. But it would have had no bearing on me because I never saw it until about 2 years later. As for her? I’m pretty sure she wasn’t confusing me for Richard Gere OR Daddy Warbucks.

3. It’s funny that whenever people talk about that Super Bowl, I don’t think “Oh that was the great Intra-New York rivalry,” or “Oh, that was the one with the last-second field goal attempt,” or “Those poor Buffalo Bills losing all those Super Bowls in a row…” I go straight to “Yeah, that’s the one I watched at the stripper’s house and I didn’t even get any. Stupid wine…” Were your friends waving their hands in front of you and making goofy faces? No? It’s probably a good thing that I wasn’t there, then.

Gina,
From what I could see, there was quite a camaraderie within the sisterhood of dancers. They really supported each other and would rally round, when one of them was sad or being disrespected.

Dumb move on Jackie's part. But that's OK. It worked out well for Pinky.

That's what I always say to The Guy when he talks about his past paramours: "What an IDIOT! But I'm sure glad she was!"

Mrs. Bachelor Girl,
Yeah, I’m sure it all worked out for the best. There would have been soooo much baggage.