My buddy John got married shortly after high school.  It was kind of a “rush job,” if you know what I mean.  But it was funny because the entire sequence of events was all out of whack.
First they got married.  Shortly after, we threw him a bachelor party out in The Barn.  A couple weeks after that, they finally had the wedding reception.
The bachelor party wasn’t really a “bachelor party…” not like in the Tom Hanks movie, anyway.  It was more like a Barn Party with a theme.  All the usual suspects were there… me and my 4 best friends (John, Rik, Brill and Billy G), plus the rest of the family, friends and neighbors, including the grownups.
Director’s DVD Commentary: The picture of my mom flipping the bird, from a couple posts back, is from this party.
We made a few half-hearted attempts at traditional Bachelor Party fare.  One of our friends offered up a grocery bag full of porno movies. (Remember, this was 1980.  No one had VCRs yet).  This was great in theory but in reality, the movies were these horrible little 8-mm vignettes… the kind where the guy never takes off his black socks.  The projector we were using, however, was a Super-8, meaning that the two were not compatible.
This, I did not know for another couple years, until I took that film-making class.  The holes in the sides of 8mm film do not mesh correctly with the gear teeth of a Super-8 projector.  As the professor was covering this material in class, all I could do was chuckle as I realized why our party movies didn’t work.  Thank goodness he didn’t call on me and go, “Mr. Dude, would you care to explain to the class what it is that you find so funny?”
So the movies would play for about 8 to 10 seconds before jumping off the sprockets.  We made a few attempts at it before giving up.  But it did lead to a memorable exchange.
During one of the 8-second clips, our neighbor Margaret stood up:
Margaret: You guys, come on, this is disgusting.
Billy G (from the back of the room): Sit down, Margaret, you’re blocking the view.
Later on during the party, she offered to do a strip tease for us.  I put on some stripper music and she began dancing around.  She made an elaborate show of taking off her gloves. 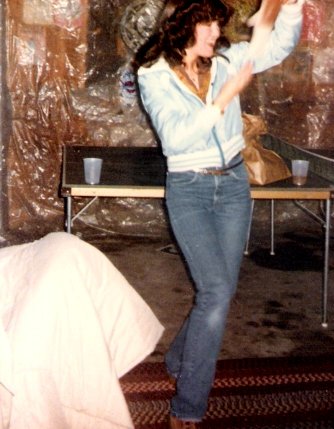 Then she peeled off her coat and twirled it around. 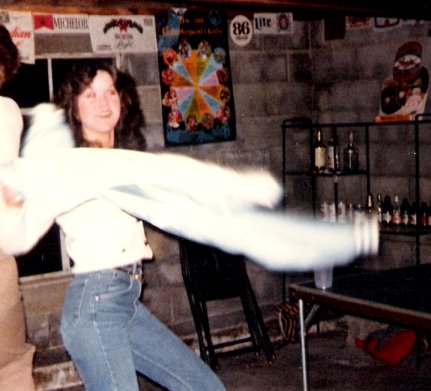 And then… she put them all back on and sat down.  End of show.
It was all good clean fun, really.  The rest of the party was just our usual drinking and dancing and carrying on.  No casualties other than brain cells.  Even the grownups had a good time.
John’s wedding reception took place in Bowling Green, OH, where I had recently started college.  It was at the Bowling Green Armory, right on Main Street in the middle of town.  It was a big hall with about a dozen big concrete steps leading up to the front door.
Mom drove us all down in the family station wagon.  Dad must have been out of town that weekend or else he’d have been there too.  So there was Mom, me, my brother, sister and a couple of neighbors, heading 40 minutes down Rt. 64 in the big Family Roadster.  The reception was basically a big barn party, only everyone was dressed up, there was a band and we got to pee indoors.  I was wearing my extra special 3-piece suit, which I had only worn two other times: to my senior prom and to John’s wedding.
Not wanting to become a spectacle on such a formal occasion, I stuck to beer that night.  John had a keg, plus wine and all kinds of booze.  I also avoided the hard stuff because I had an ulterior motive.  It turned out that some of my friends from the commuter student organization were having an off-campus party that same night.  As luck would have it, the house was about 5-6 blocks from the Armory.  I figured when things slowed down at the reception, I’d mosey out for a while, make an appearance at the party and impress all the lovlies with my snappy suit.
My brother, on the other hand, was most interested in doing some drinking.  He was only a sophomore in high school so he was geeked to have such easy access to the booze.  But not wanting to push it, he had other people go get him the drinks.  For some reason, he was drinking Seven and Sevens.  It wasn’t too long before he was completely smashed.  I remember at one point, someone running over to the Burger King to bring him back some burgers to serve as a “beer sponge.”  It didn’t work; he was a hurl factory.  At least he learned that you can’t pound liquor the way you might pound beers.
So once all the high points of the reception had come and gone, I figured it was a good time to check out my friends’ party.  I asked one of the guys at the reception, Big Dan, if he wanted to go with me.  He was game, so we strolled out of the reception and into the neighborhood until we got to the party.
The parties there were always rocking.  I’d go to a bunch more over my 4 years at BG and they were always a blast.  So, beer in hand, I made the rounds at the party until I bumped into Big Dave.  (I had a lot of Big friends.)
He said, “Hey Bluz, try some “Hairy Buffalo.”
He pointed over to a big insulated cooler full of brown liquid.  I’d never heard that term before so I asked what was in it.  He was cryptic.
“Oh, a little of this, a little of that, and one very special ingredient...”
Director’s DVD Commentary: ...which turned out to be pure grain alcohol.
Now I knew I shouldn’t mix beer and liquor, owing to a previous experience, but as a freshman I wanted to prove myself worthy to a respected upperclassman, so I said I’d try it.  He filled up a pint glass for me and off I went.  The stuff tasted pretty good.  I’d have to remember about this Hairy Buffalo.
Well, that was one of the last things I remember about that night.  I went from lightly buzzing to gibbering drunk in about 10 minutes… cow-kicked by a Hairy Buffalo.
I don’t remember anything else I did at the party.  I vaguely remember leaving with Big Dan and walking back to the reception.  Apparently, I talked his ears off about a girl at the party that had recently agreed to go out with me.
Director’s DVD Commentary: She never did, though.  She was probably intimidated by my suit.
Dan was a good guy.  He just let me talk it out.  This was the 1980 precursor to “drunk-dialing.”  You had either to be there in person, or go home and use your corded, rotary phone.  You know, I think the rotary phone alone prevented years of drunk-dialing.  It takes so long to dial, a drunk will forget what he’s doing and lose interest before the full number can be dialed. 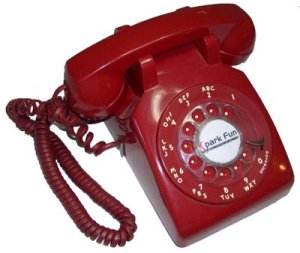 Cassie and Jessica, this is a rotary phone.  You've probably only seen them in museums and Brady Bunch reruns.
By the time we ambled up to the Armory, the reception was ending.  I saw John at the top of the steps, maneuvering a keg out the door.  The plan was to bring the leftover beer back to The Barn and kill it over the next week.
Now if I had any sense left in my thick, drunken skull, I’d have let Big Dan help with the keg.  Dude probably could have just put it up on his shoulder.  But I was feeling no pain, but also a little guilty for leaving my buddy’s reception, so I wanted to help.
I helped John wiggle the keg right up to the first step, then each of us picked up one end.  So far, so good.
As soon as I took that first step down, I lost my balance and dropped my end.  The keg rolled down the stairs and out into Main Street.  [tink-tink-tink-tink…]
Cars slammed on their brakes.  Drivers laid on their horns.
I, as well, rolled ass-over-elbows down the stairs and onto the sidewalk.  I went down with what appeared to be the well-trained grace of a professional stuntman, but was in fact a complete lack of muscle control.  I just somersaulted right down the stairs and landed flat on my back.
As I lay on the ground, I heard someone screaming from above, “Oh my God… the KEG!!!  Get the keg!”
You can see where my friends’ priorities were.  They were probably pissed because now the beer was going to be all foamy tomorrow.  Meanwhile, my mom swears that at the moment this all began, the band was playing “Roll Out the Barrel.”
I got up and seemed to be none the worse for wear.  I had a little scuff on the suit jacket and my watch crystal was cracked, but I was OK.  I hit those stairs like I was Gumby.
The drive home was not much fun for anyone.  Well, it didn’t bother me so much because I don’t remember any of it.  I was drunk and riding shotgun; my brother was (still) drunk and sitting behind the driver’s seat.  We spent the trip simultaneously ralphing out our windows.  I’m sure Mom must have been very proud of her sons.
The family that “sicks” together, sticks together.
The kind of stripes we put on the sides of her car would not impress anyone while out cruising the Boulevard.  Luckily, one of our friends cleaned off the car doors that night.  I have no idea who it was, but he deserved hazard pay for that task.
There were a lot of lessons learned that night.  John learned not to book a wedding reception in a college town.  Mom learned not to trust her sons at an open bar.  My brother learned not to drink the hard stuff.  I learned not to drink Hairy Buffalo or anything else with a “special ingredient.”  Our friends learned that they should probably get a ride from someone else next time.
And everyone learned that they should never let the drunk help carry the keg, no matter how good he looks in his suit.
Posted by bluzdude at 5:00 AM

Email ThisBlogThis!Share to TwitterShare to FacebookShare to Pinterest
Labels: Best of Darwinfish, Stories and Misadventures, The Barn, The Family Business