A couple of things caught my attention this week, so it’s time for:

Hey Bluz, what do you think about…

...Newt getting sued by a member of the rock group Survivor for using Eye of the Tiger at his campaign rallies?  He probably should have stuck to another Rocky song, “Take Me Back,” sung by those scruffy dudes around the burning barrel.  No word on if the band is going after the CBS Reality show, next.

…Mitt’s gaffe about “not concerned about the very poor?”  I’m getting pretty tired of sound-byte politics.  Does no one allow for context any more?  I can’t really argue with Mittsy about this… He says he wants to concentrate on the Middle Class and that the poor already have a safety net, which if broken, he’d fix.

OK, maybe he’s full of shit, maybe not, although I suspect the former.  I think it’s an accurate thing to think but a really dumb thing to say when you’re running for President.  There are plenty of reasons not to vote for Mitt Romney.  This isn’t one of them.

And for the record, neither is his being Mormon.  I’m just as uncomfortable with a Mormon President as I am any bible-thumping Baptist or evangelical that would govern the way he thinks God (or some charlatan from the 1800s) is telling him to.

…Donald Trump’s endorsement of Romney?  Well, that ought to sew up the Bloodless Filthy Rich Business Tycoon vote.  I wonder if Mitt has it in him to say “Thanks but no thanks.  Now go back to the shameless paean to your own ego and self-promotion that is ‘Celebrity Apprentice and pretend-fire people for insufficiently kissing your ass.’  I’ll be over here trying to trick some people that AREN’T multi-millionaires into voting for me.”

…the Susan G. Komen Foundation pulling funding from Planned Parenthood?  I find this reprehensible.  Sure, Komen is saying that they passed a rule to prevent funding any group that’s “under investigation.”

Great.  That means any single Senator, Representative or governmental figure at the state or federal level can spike any organization with which they have a philosophical difference, just by opening an investigation.

No matter what Komen says, this is nothing but an attempt to appease the religious right at the expense of women’s health.  They continue to ignore the financial facts that show that only 3% of Planned Parenthood’s funding goes to abortion services and carry on like it’s a butcher shop.  Plain and simple, PP provides breast cancer screening to thousands of low income women who need it.  To cut that off because of a side issue is to play politics with women’s lives.  This organization will not see another dime from me until they pull their heads from their collective hoo-ha’s.  Stick a pink ribbon on that.

As far as I’m concerned, if anti-abortion activists really want to lower the number of abortions, they should double the funding to Planned Parenthood and spend it on getting no cost or low cost birth control into the hands of anyone that wants it.  But you’ll never see that happen.  It’s so much easier to pass judgment and act all holier-than-thou than it is to actually make a difference.

You can sign a petition requesting that the Komen Foundation overturn this destructive policy by clicking here.

…the next conservative media uproar about Modern Family?  This one hasn’t even happened yet, but it’s coming.  Seems they’re about to do an episode that indicates that teen Haley has had sex.  (Daddy Phil finds out, and is dismayed as well that his wife Claire already knew about it.) 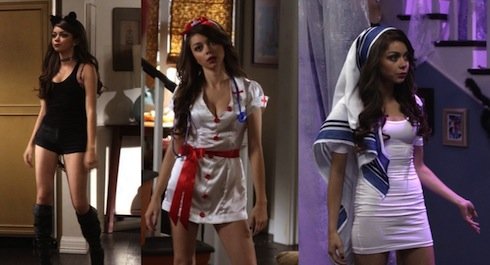 When Haley wanted to dress like this for Halloween, you had to figure that horse is already out of the barn.

If you read my my post about last month’s Modern Family controversy, (toddler says the F-word), I’m sure you know where I’ll come down on this one.  Same place…

People will get their undies in a twist before even seeing the show and demand it be pulled.  The show will run and it will handle the issue with grace and humor.  Rational people will wonder what all the fuss was about and the holy rollers will go back to looking for new things about which they can become righteously indignant.

Look, what is the percentage of teens that have had sex before graduating high school?  50%?  70%?  It’s up there.  But there’s still this faction of the country that refuses to deal with it, preferring to clamp their hands over their ears and go “La la la la la la… My baby will not have sex until she’s married… La la la la laaaaa.”

Didn’t we deal with this already?  I remember a show called “James at 15,” (when I was 15) and they had an episode about James losing his virginity. 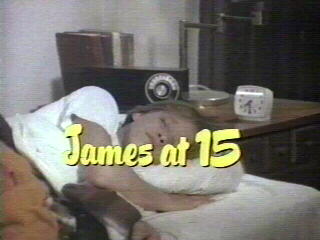 Screen shot is from the opening titles, not from his virginity-losing scene. That would have been depressing, if that were the case.

People lost their freakin’ minds.  The producers had to make sure that his well publicized cherry popping was seen as a negative, just to get it on the air.  (They included a big pregnancy scare.)

It’s just a TV show, folks.  It’s all made up.  Can’t we focus on something that matters?  I mean, it’s almost Super Bowl Sunday.

That reminds me… there are bound to be some commercials that get somebody all pissed off.  I can hardly wait.

Director’s DVD Commentary: I meant for this to be only a couple of paragraphs on each topic, to fit in with my new “Hey Bluz” motif.  Now it seems I probably should have made this another Odd Bits post.  Oh well, live and learn.


Late Update: As you probably know by now, the Komen Foundation’s decision to pull funding from Planned Parenthood was rescinded this afternoon, bowing to a total shitstorm of protest and admonishments.  Such is the power of social media in 2012.

Ten years ago, people would have grumbled for a few days on the news, but life would move on with little change.  This week, people rose up and roared for what they thought to be right and got a giant fund-raising and advocacy group to stop on a dime and pirouette back to where they came from.  My little post was but a grain of sand on the beachhead, but when you think about it, what is a hurricane but single drops of water, working together?

Power to the people.
Posted by bluzdude at 6:30 PM