Pittsburgh blogger Jayesel (pronounced Jay-ess-el) wrote a post this week about “Imposter Syndrome.”  Red Pen Mama also chimed in on the subject, on her blog.
Jayesel defined “Imposter Syndrome” like this: “…it’s the phenomenon (particularly among overachievers), where we are in complete denial of our gifts and skills- too wrapped up in hoping nobody finds us out as IMPOSTERS, so filled with self-doubt that it often clouds our ability to do our jobs well, even if we are truly talented and good at them.”
Further, she brought up how so many people have trouble accepting compliments on things the do well.  She then went on to list 7 things that she is good at and asked her readers to do the same.
I commented on Jayesel’s post, but as you know, I’m not too proud to stoop to a little self-plagiarizing if I can co-opt it for a cheap post idea.
I totally identify with Imposter Syndrome. Any second, I expect someone to come in and go, “What are YOU doing here, working for this respected company in this nice office building?” and whisk me away…  In the back of my mind, there’s the ever-present fear that someone in charge is going to realize that I’m not nearly as clever as I may seem and that I would serve society so much better if I were off doing some kind of manual labor that features the use of long-handled tools.
I think we deflect praise in order to appear humble. Since I was a kid, I hated being around braggarts. I figure, if you’re good at something, I’ll notice… if you have to tell me about it, you must not be that good.  I am aggressively unimpressed by people that constantly toot their own horn, so consequently, I have a hard time doing so myself.
For example, I sometimes get told I’m a good photographer (of anything but people). I always feel funny about that… I usually point out that the sunset (or forest or flower or pond…) was already there looking beautiful and I just happened by and snapped the picture.  I liken it to the rooster taking credit for the dawn.
I know that’s not exactly true… I have to recognize the photographic potential in a scene, frame it in an aesthetically pleasing fashion and take the shot without jiggling.  Oh, and I have to have the forethought to have my camera with me! 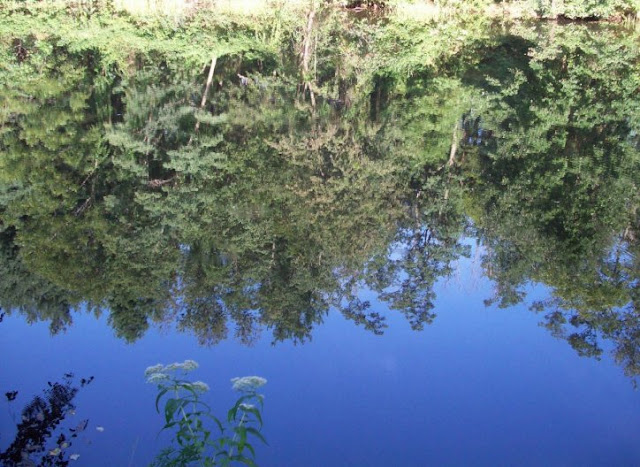 OK, I may not have created the pond, but I did realize that the flower, upright in the foreground, would be a cool contrast to the upside down reflection from the pond.
But OK, to follow through with the original request, here are some things I’m good at:
1.  I can write things that make people laugh.  I’m hopeful that if you’ve been reading me a while, you’ve noticed that about me.  When I was younger, I was more of a performer, but I never felt comfortable in that role.  I love the crafting of a funny line and getting it out there.  The drawback is you don’t have that instant feedback that comes from live performing.  That’s why blog comments are so important.  I admit it.  I'm a feedback whore.
2.  I’m good at finding flaws in logic and picking apart an argument.  Chalk it up to a basic logic class in high school and a couple critical thinking classes in college.  That’s why political ads, speeches and Fox News get me in such a twist.  I can recognize so many of the devices being used… the misdirection, the loaded language, misleading statistics, skewed imagery, etc.
3.  To go right along with that, I have a very healthy skepticism.  Being skeptical leads directly to the finding of facts.  Influence-peddling media of all leanings prey on the fact that most people will believe what they’re told from a position of authority, especially if it supports what they want to believe.
4.  I can reach things on high shelves.  I swear, that’s why my parents bred me this way.  Someone has to be able to reach the cobwebs, paint the ceiling, or put the top ornament on the tree.
5.  I take a nice landscape picture.  (See above.)  The rub is that I have no idea what I’m doing.  I’m sometimes told that I have some kind of eye for composition.  I don’t even know what that means.  I just take a shot that looks interesting.  I guess it works…
6.  I don’t usually hold a grudge, unless it’s reeeeeeeally earned.  I can get pretty pissed off at someone, but over the years, I’ve learned that it just takes too much work to stay angry.  Once I get a little distance… maybe an hour, maybe a day, maybe a month or a year, but eventually I’m back to square one and all is cool.  If my dating past taught me anything, it’s that the opposite of love is not hate; it’s indifference.  Once you reach that, it’s easy to slough off the hurt.

7.  I’m good at coming up with ways to do things efficiently.  I did a post on this once… I’m forever in search of the best way to do things, and more often than not, I’ve found it for things I have to do with any regularity.
So there… that’s what I’m good at.
Now, the things I need to work on… much longer list.
And it starts with “brevity.”
Posted by bluzdude at 9:24 PM