Tonight’s “The Big Night” here in Baltimore; in Pittsburgh too, I expect.  The Steelers and Ravens are slated to play on Sunday Night Football, with the winner a heavy favorite to win the AFC North division.  As the Ratties are at the very top of the Unholy Trinity, much is riding on this game; not only playoff implications but more importantly (to me) bragging rights for the next week or more. 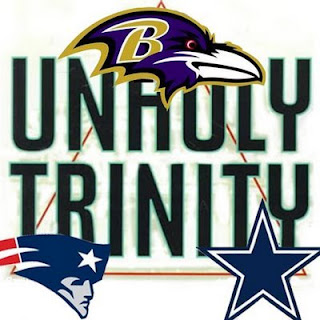 Suffice to say that if the Steelers lose, it will be very uncomfortable for me when I go back to work.  I’ll have more on the game later, but first…
Helping the Economy, One Click at a Time
I did the bulk of my Christmas shopping on Cyber Monday, this year.  Went pretty well, too.  I did delay some purchases, so they won’t all show up on one credit card bill.
I hardly ever actually go out to stores for Christmas shopping any more.  Believe me, I got more than enough of that when I worked in the record stores; malls or otherwise.  Most years, when I was a store manager in Cleveland, I did 100% of my Christmas shopping in 2 places: my store, or the liquor store.  It’s amazing how efficient you can be when your both broke and pressed for time.
The biggest problem I have with the online shopping is leaving it at gifts for others.  This is especially true when I’m shopping for my dad, brother or brother-in-law, because I’m usually looking for NFL or NHL stuff.  I almost always spot some things that I want my own self.  And hey, sometimes you just need that one more purchase to get the free shipping.  God only knows how many times I’ve spent that extra $20.00 so I could save $7.00 on shipping.  But it’s the best way I know to be sure I get what I want for Christmas.
Tis the Season to Say NO
I am NOT looking forward to the next 2 years of political inaction.  It’s too depressing to even write about any more.  The Republicans, who are sooooo concerned about the deficit, have slammed the brakes on all legislation until their cherished 1%, ie, gazillionaires get to keep their massive tax cut.
Of course they SAY it’s to create jobs and spur growth, which denies the painfully obvious observation that if these tax rates THAT CURRENTLY EXIST AND HAVE FOR THE LAST 8 YEARS are so great at triggering growth, why are we in such a jobless cluster-fuck right now?  (And have been since 2007)  Companies are pocketing the extra cash and sitting on it.  And paying bonuses to the execs… after all, we wouldn’t want the Lexus dealers to go under, would we? 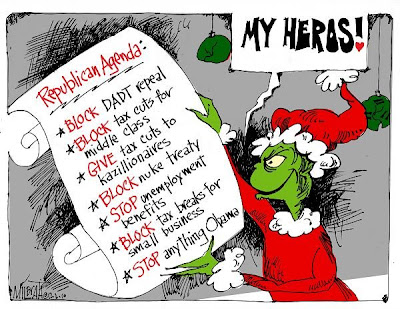 Yeah, twits like Sarah Palin are going to lecture us about economics.  Sarah Palin thinks "fiduciary responsibility" means “using Summer’s Eve on a regular basis.”
And now the party that is supposed to be so concerned with National Security is also playing politics with the START treaty with Russia, who says that if it doesn’t get passed, they’re going to begin a massive re-stockpiling of nuclear weapons.  This is a party that’s so obsessed with reclaiming power that they are willfully putting this country in mortal danger.
And the even funnier thing is how many of those Republicans are trying to keep from repealing Don’t Ask Don’t Tell by claiming it hurts military readiness.  Here’s a reality check for those guys: Tiddleywink policies like DADT don’t matter a lick once the bombs are in the air.  Get over it, like most of the country has, and accept the service as offered.  We all bleed the same red. 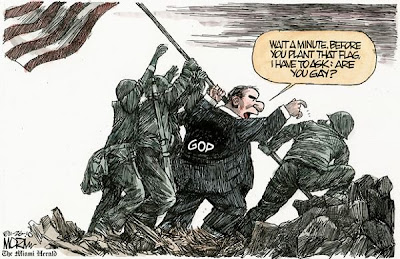 Congratulations, America, you got what you voted for.
Picks-Burgh
I do football picks every game, through the local newspaper’s website.  You get points for each correct pick, which you can collect and spend on virtual tickets for lottery prizes.  So there is no money involved and the picks are basically just for fun.
I look at doing the picks as a lesser evil than Fantasy Football.  I think FF sets up too many contradictory impulses, especially when there are guys on your team who play for teams that you need to fail in order for your own team to succeed.
The picks have a way of doing that too, because I always try to pick with my head rather than my heart.  So many times I’ll be watching a game and rooting for a team that I picked, when its loss would benefit my Steelers.  Usually this involves teams that aren’t in the Steelers’ division.
I think it just goes to show that we, as a people, would rather be “right” than help our own causes.
The Mojo Boogie
I was going to do a bit on some of the comments I’ve seen on the local paper’s blogs about the Steelers/Ratbirds game, but it’s really just too depressing.  I’m not talking about the sentiment as much as the complete lack of spelling, grammar, or even the presentation of a coherent thought.  If you’d like to see what I’m talking about, you can click here.  I especially like how two different Rattie fans misspell the word “inbred”, as they apply it to Pittsburghers.  And they’re still talking about a town that existed in the 60s and 70s, rather than the sparkling center of medicine, science and education that was named Most Livable City in America this year.
Yo, Butchie.  The smokestacks are gone, just like your front teeth.  If you stepped out from inside the Beltway once in a while, you just might notice that.  Meanwhile, your city leads the league in homicides per capita, STDs and poor English skills.
I had to think long and hard about tonight’s game mojo.  I consulted the Mojo Spreadsheet for data from this year and prior games against the Ratties.  There is no clear pattern.  I can tell you that for the past two Steelers “away” games, I wore my white Polamalu jersey, with white Steeler sweat pants and a white long-sleeved tee shirt.  The Steelers won both games, but both went down to the wire and one went to overtime.
So because I wore the all white, is that the reason we ultimately won?  OR, is that the reason the Steelers struggled the way they did.  Like, would they have had it in the bag and not made so many mistakes if they weren’t fighting against my dreaded Ghost Mojo?
It’s a lot to consider, for a man of science.  (snork!)
So I’m on the fence for this one.  I’m definitely going with the white #43; I just don’t know if I’ll change up the pants and sleeves.  That will have to be a game time decision.
I took tomorrow off, because I knew this would be a long, draining night.  Now I just have to think of something to do to occupy myself this afternoon, while I wait for 8:20 to roll around.
Hey, it’s not like I don’t EVER have chores to do… In fact, I have to go out and get beer for tonight.  So there!
Posted by bluzdude at 1:20 PM