When I got up on Sunday morning, I looked out the window and saw that it was a beautiful sunny day and thought, “Gee, it looks like a good day to go down and catch an Orioles game.”

They were playing the Oakland A’s at 1:30, so I figured, why not?  They had just unveiled the first statue in the picnic area the day before, so I was anxious to go check out the new Frank Robinson statue.

I know I just did 2 Camden Yards posts a couple weeks ago, but shit, what’s the point of doing anything if you can’t do a post about it?  This one will be different, I promise.

When I went online to buy the tickets, I noticed that the place actually looked like it was going to be crowded… at least in the cheap seats.  But I spotted an aisle seat in the right field bleachers, about 3 rows back, so I jumped on that.

Unfortunately, I decided to look at my Orioles schedule after I bought the ticket… the promotional calendar said that it was Little League Day.  Gah!

That meant the place would be crawling with rugrats.  I had a couple of jabbering magpies totally ruin a game for me last year, who when they weren’t yakking at each other, they were screaming at the players from about a foot behind my ear.  Looked like I’d be out there surrounded by yard-apes all day.  I put the over/under on how many chattering monkeys I’d have to toss over the outfield wall, at 4.

Still, you can’t beat a cool, clear, sunny day at the old ballpark, so out I went. 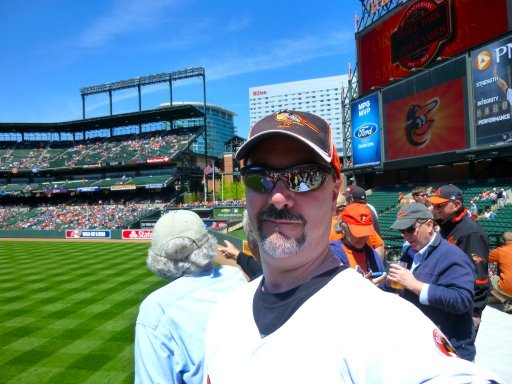 “I welcome me to Camden Yards.”  If you look close, you can see the reflection of my arm holding the camera, in my left sunglasses lens.

Because it was Little League Day, the kids got to walk around the perimeter of the field before the game.  That also meant that there would be no meaningful batting practice.  I bought my traditional First Beer from the Beer Lady on the flag court and collected my traditional fist bump from her.  (She said, “Much love, baby.”  I love it when old black women call me “baby.”  Would it be insulting if a middle-aged white guy answered, “Love you too, Big Mama.”?)

I got a shot of the flags, up on the flag court, which I omitted from my prior ballpark post.  They have one flag for each team in the American League, in order by division and standings. 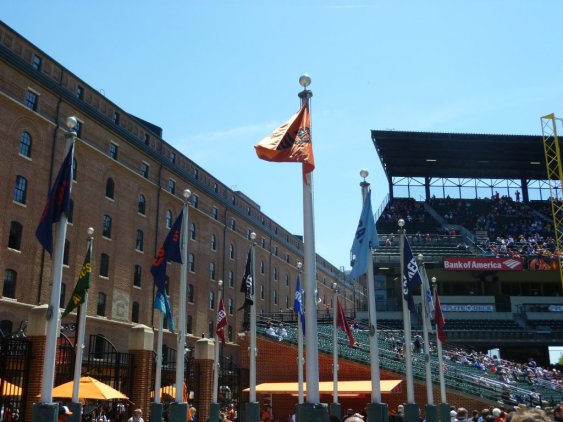 You can tell it’s April when the O’s flag is flying in first place.

While I was up there, I took a shot of where I’d be sitting.  Looks like I’d have to move some dudes out of my seat there on the aisle. 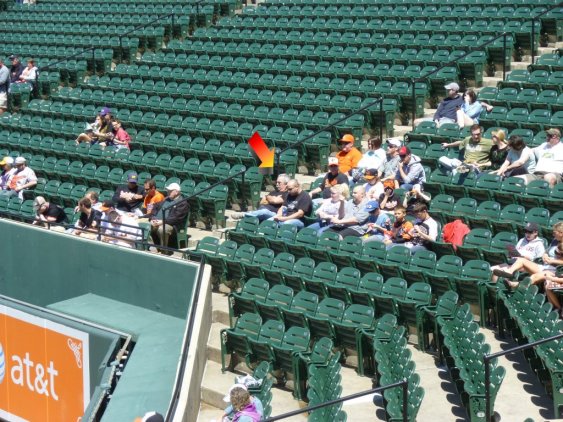 Old dude with his arms crossed is in my seat.

Technically, I was in the 6th row, but the rows of that section start at the very bottom.  But over around the bend of the wall, the 6th row is the 3rd row from the wall.  That’s baseball metaphysics for you.  I also noted, even as the section filled up, that I didn’t see many kids.  I appeared to be in the Crusty Old White Man section, so I would be among my peeps.

Anyway, I lit out for a look at the Frank Robinson statue.  They did a good job on it, but getting a clear shot of it was troublesome.  Everyone else in the park was trying to get a shot of their kids with the statue, so I had to wait a bit.  Then much to my relief, after another Family Portrait, this dude beside me said, “Do you mind clearing off for a sec, so I can get an unpopulated shot?”

That worked wonders.  He was nice about it and everyone complied.  Then about a half dozen of us childless people had a chance to get a picture without someone else’s little angels hanging off Frank’s legs.  I thanked the dude for saying something; that’s not usually My Way.  (My Way is to stand there looking irritated until someone figures out what I want.) 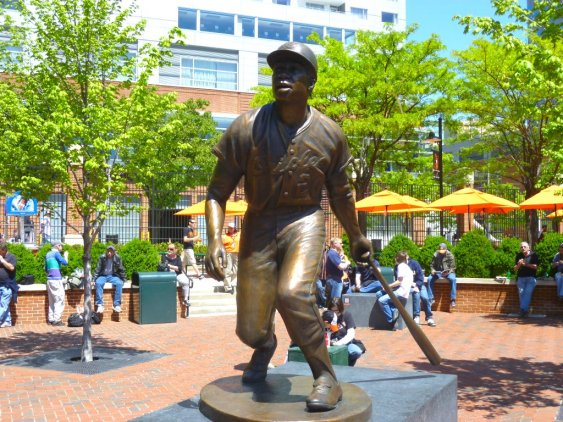 The statue was a little smaller than the ones at PNC Park, but the detail was just as good.  Robbie was a heck of a ballplayer… it’s just too bad that he couldn’t beat the 1971 Pirates.  (Woooooo! Go Bucs!)

I finally went down to claim my seat and it was really no problem.  The guys sitting there were two truckers from Chicago and they couldn’t be nicer.  The guy said that he got walkup tickets and asked for something on the aisle.  I guess she just got him close because I had that aisle seat claimed several hours earlier.  But it was cool.

I love meeting people at the ball park, especially if they’re from out of town.  I try to leave them with the impression that there are some nice people here.  And of course, they were from the Midwest, so they were nice by default.  We talked Cubs and Sox baseball for a while, as I told them how my first baseball game ever was at Wrigley and how my little 3rd grade heart was broken by the 1969 Cubs. 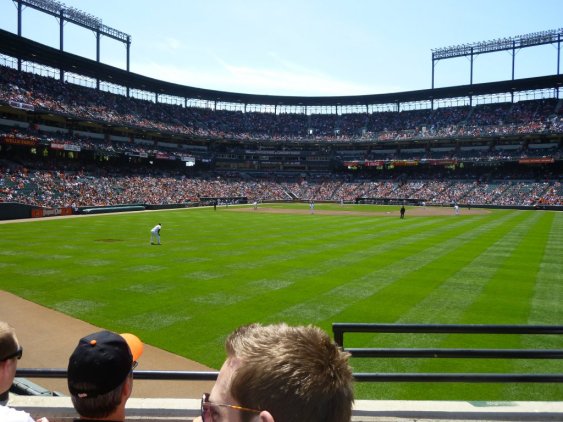 My view from the outfield.  Everything didn’t look quite so far away, in person.

The game rolled by pretty quickly, as it turned out to be a pitching duel.  The Orioles couldn’t do squat at the plate.  The A’s weren’t much better, but did come up with a couple of runs.  Could have been more, but the Orioles outfield made a couple nice plays.  Nolan Reimold went up over the wall to rob a guy of a homer in left, and Adam Jones made a nice diving catch of a sinking ball in center.

About the 5th inning, the ushers came by, passing out the All Star ballots.  I dutifully filled mine out, but they never came back around to pick them up.  Pissed me off.  It’s like, they ran out of things to do on the scoreboard, so they thought, “Let’s let them try to punch out a bunch of paper holes for a while.”  This is probably why the Orioles never have any more than one All Star each year.

So, here we are, bottom of the 9th, O’s were down by 2.  I considered heading up and watching the bitter end, up by the exits, but you know, with only being down by 2, the game can be tied with a mere swing or two.  Next thing I knew… Orioles Magic.

One guy bounces an infield hit.  Next guy dubs one that the pitcher fields, and then throws away.  Now there’s runners on second and third.  Hot damn!  Rally time!

Matt Wieters (whose jersey I’m wearing) cracks a long ball off the wall for a double, scoring both runners.  Tie game!

Next guy is walked intentionally to create a force-out situation, runners on 1st and 2nd.  New acquisition Wilson Betemit comes to the plate and cracks a fly ball straight at me.  Once it went over the right fielder’s head, I knew that was ‘game,’ so I jumped up in celebration.  I saw the ball bounce off the wall and back into play, but the fielder was already going back to the dugout.  I figured that it was because it only took one run to end the game so he bailed.  Later, I learned that it was actually a home run, because the ball hit the “secondary” wall behind the outfield wall.

If you scroll back up to the picture of my seats, you can see the “shelf” over the wall.  The ball skipped off the horizontal plane and bounced off that second wall.  That’s a home run.  But you couldn’t tell that from where I was.

But that’s how, for the 4th consecutive game, I ended up either on TV or in a press photo.

I didn’t set up to DVR the game so I just turned on ESPN and there were the highlights.   And then, there I was. 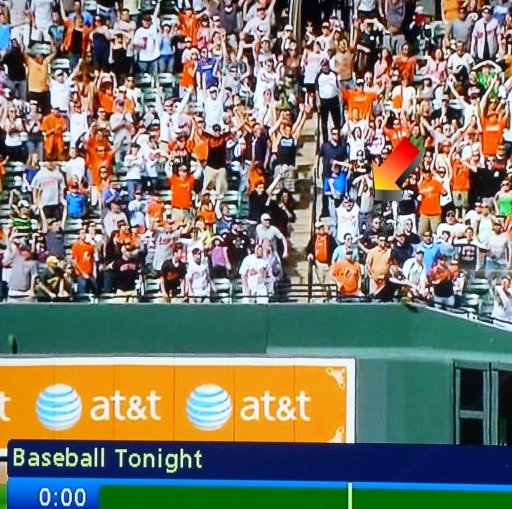 There I am under the arrow, the goober in white, doing the Y-M-C-A.
By that time, I had moved back a row, (after a family had left early) to give my Chicago friends some elbowroom. 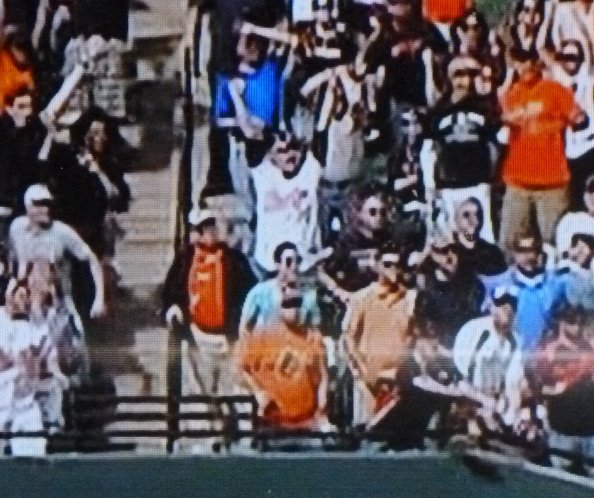 Ferris Bueller, eat your heart out.

I should start a new blog and post each time I turn up in a crowd shot.  I’ll call it Zeligfish.
Posted by bluzdude at 7:48 PM