I had a busy weekend, for a change.  It was so busy, I didn’t even have time to write my customary weekend post.  But no matter… no one was reading blogs anyway.

After staying quarantined last weekend due to a cold, and the previous two, due to it being 7,000 degrees outside, I finally ventured out of my cave on Saturday.  First order of business was to go see “The Dark Knight Returns.”  Obviously I had to stop at WalMart first, to pick up a bulletproof Kevlar suit, but they wouldn’t let me in the theater while wearing it.  I think they were afraid I might be smuggling in some Milk Duds.

After a bumpy start, (because the movie was delayed about 15 minutes due to technical difficulties), I immediately got lost in the story.  Short review: it was very dark and bloodlessly violent.  They did a lot of cutting away just before something horrible happened and then returned to the prone bodies.  Also, Batman gets his ass kicked, but good.  That’s not something we’ve seen very often.

It was also cool seeing Pittsburgh double as Gotham City, even though they matted out the more recognizable dahntahn landmarks.  While I wasn’t able to spot Carpetbagger’s house, I think I know what scene they filmed nearby.

And during the big football scene, where Hines Ward runs a kick return back for a touchdown despite the giant craters opening up behind him, as if they were Casey Hampton’s footprints, there was a very clear shot of Ben Roethlisberger, Aaron Smith, Brett Keisel and Bill Cowher standing on the sidelines.

There were big twists throughout the film and I loved the ending.  Suffice to say, it’s something I’ve wished forever since I used to watch the TV show as a kid.  I’ll just leave it at that.

After a little more shopping and some Wendy’s, I continued on to Best Buy, to accomplish my primary objective for the day: obtaining an iPad.  I am anything but an “early adopter.”  In fact, I think I’m more like a “final adopter.”  I sniff around the new hot item for months, if not years, gathering intel and waiting for any bugs to be fixed.

Remember that during my Ohio vacation, I’d played around with my buddy’s iPad?  It was the first time I’d seen one in action, so I realized that it would be perfect for me.  Finally I would be able to tweet about a game or TV show, without having to get up and walk 20 feet to my PC.  I’d be living large!

Unfortunately, the moment I do jump onto some kind of technology or web service seems to be the tipping point for when that tech becomes un-cool and/or obsolete.  (See: my 2006 flip phone, which was State-of-the-Art for about 15 minutes before the iPhone came along.)

To try to delay that tipping point for as long as possible, I spent another $100 and got the “new” iPad, the one with the retinal display that looks so cool in all those commercials.  I figured it was a small price to pay to delay obsolescence for at least another couple months.  I was going to get a case for it but they wanted $39.99 for the cheapest freakin’ one!  Most were from $49.99 to $79.99.  Screw that.  I ended up ordering one from Buy.com for $8.97, that didn’t look any different.

I suppose I should say that getting the iPad was a partial objective.  The second part was setting it up with a wireless home network and getting everything to work.

Back when I got my current PC in 2004, there was an offer with my DSL service for a free wireless router.  I got the router, but never actually bothered to hook it up.  It didn’t really make sense… I only had one desktop; I had no need to go wireless.  So I sat on the equipment, thinking maybe one day, I’d have a need.  Next thing you know, eight years have gone by.  (As a reference to how long that is in Computer Years, the instructions on the box said you had to have IE 5 or above.)

Anyway, everyone I talked to told me that setting up a wireless network was a breeze.  Now I’m no electronics genius by any means, but I am sufficiently competent to follow some directions and get shit done.  I figured I’d come home, plug in the router, set up the network, charge up the iPad and I’d be watching the Olympics and tweeting from my couch.  I made sure that my 2004 router was wirelessly compatible with the iPad, so I was confident that everything would be a breeze. 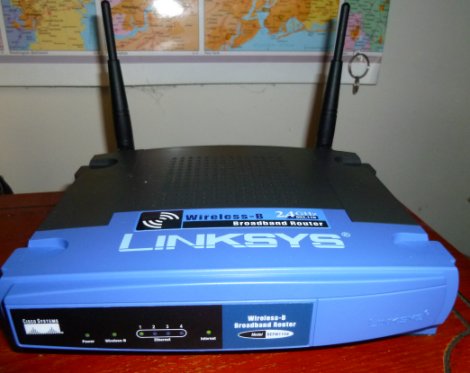 Paint this thing red, and it looks like something out of Batman.

Basically, everyone that told me setting up a wireless network would be a breeze can kiss my ass.  I wasn’t setting up a network as much as opening a new level of Cryptic Computer Jargon Hell.

What's worse is that I was using the instructions online from the ISP site.  You know, I really should have printed the goddamned things, but I figured, “Oh this will work… what could go wrong now?”

So when I started changing all the settings, I lost my existing access, which included my instructions.  I feverishly tried to reset all the settings from memory, but as I’d been in and out of the system so many times, I had no idea how things were when I started.  It was well into the evening before I was able to reestablish my Internet connection through my original modem.  I spent from 6:30 to 9:30 working on this stuff, just to get back to where I started.

At that point, I had no will to continue with the new router, so I turned my attention to finding better directions.  Eventually, I did, and this time I printed the damned things and made some notes.  I checked some other sites that also gave advice on handling my old modem.  I didn’t get to bed until near midnight.

So much for my plans for leisure Olympic tweeting…

God may have rested on Sunday but I chose to wade back into my network of hell.  But this time, armed with some better directions, I sailed right through the setup and got the router working right off the bat.  (My new directions included a step that neither the Quick Start instructions nor the Wizard had mentioned.  Fuckers.)

Once the router was live, all I had left to do was play with my new iPad!  With all the hype about how Apple is so technologically progressive, I was sure they’d have a sleek little instruction booklet for me to go through.

You know what they had?  Three sentences on a playing card.  But it was OK, the iPad setup process was pretty much baked in.  I was able to follow the steps and get it going.  Still, would it have killed them to have a little something about what all the standard apps do?  Oh well, live and learn, and boy do I have some learnin’ to do.  Anyone know some cool apps I should check out?

I’ve always avoided the Apple products; their cult-like following has always struck me as odd.  So I’ve had no iMac, iPod, iTunes or i-anything.  I was just an i-Talian.  But no more.

Now I just wonder if this will all be worthwhile.  I need to figure out how to monetize the benefit I’m getting.  So if I would pay a quarter for each time I save a trip from my couch to the computer and back, (and I would) it would take me 2400 trips to make up for the $600 I spent.

That means you’ll be seeing me get a lot more active on Twitter.  (Follow me @DarwinfishBluz)  Now that I’m using an official Apple iPad, my tweets are sure to be more creative, stylish and graphically pleasing… at least until they roll out the new SuperMega iPad 4000, coming in September to a store near you.

By the way, guess what happens when someone with Delayed Pressure Urticaria spends all day tapping on a piece of glass?  Swollen finger.

Great.  Now I’m going to have to make an effort to use more than my index finger on the iPad.  I’ll have to become ambifingerous.  I’ll let you know how that goes.  But now, I have to go answer some emails from the couch…
Posted by bluzdude at 7:20 PM