Last weekend, I had one of those “WTF” kind of morning-dreams... a real doozy. (Sadly, neither Tina Fey nor Cat Deeley were involved.)

OK, get this… I dreamed that I was selected as an offensive lineman in the NFL draft, as the 4th pick overall, by the Seattle Seahawks.

Now, just let all that ridiculousness wash over you, as you consider the absurdity.  I mean, I’m 50 years old, for cryin’ out loud.  And even at my most athletic, I would have never been confused with an offensive lineman.  (Those are the guys that usually go around 6’5”, 300-plus pounds, with arms as big around as my thighs.  Best I ever could have hoped to be was a pass-catching tight end, or in other words, a tall white guy with good hands, that’s too slow to be a wide receiver.)

And it gets worse… the dream setting was not Radio City Music Hall in New York, with the NFL commissioner, a podium or TV cameras.  My setting was some kind of wooded hillside and the situation was like choosing sides on a playground.

The Seattle coach just pointed at me and said, “You, you’re with me.”

He had already selected this other dude with the 3rd overall pick, who was definitely “offensive lineman” caliber, a huge black guy with a big, thick beard.  I figured they must have made a trade to land two consecutive first-round picks.

Even weirder than all of these strange things happening in the dream were the things that were going through my head, as I considered my situation (during the dream.)

* Ugh, I gotta play for the Seahawks??  Seattle is such a long way from everything I know.  And I don’t even LIKE Starbucks.  And what about all the rain?

* You mean I have to wear those ugly uniforms?

* I wonder if the Seattle fans will ever forgive me for rooting against them in Super Bowl XL.  (You know, the one I attended, adorned head-to-toe in Steelers gear?) 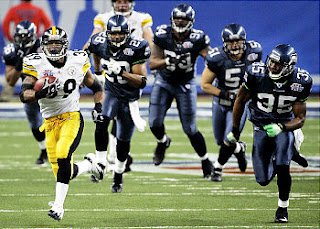 * On the other hand, getting picked 4th overall in the NFL draft is going to land me a shit-pot full of money.  I suppose I can get used to the change of scenery.

Next thing I knew, I was in the den at “my house,” which I didn’t recognize directly, but it resembled the place I used to live in New York.  And I thought to myself, “OK, now what do I do?”

I considered my situation for a second and thought, “Well, I guess I better start working out, or else these guys are going to kill me.”

That’s when I woke up, going “What the hell was that?”

I went right back to sleep though, and promptly started dreaming about telling people all about my NFL dream.  I’m serious!  It was totally carrying over, like a dream within a dream.  I imagine that somewhere in a pit-filled basement, Sitcom Kelly was “Inception-ing” me.

So what do I make of all this?  There are several options I can think of…

* I want to be recognized for my abilities.

* I want to be part of a team, because I was rarely picked early for teams, during grade school, and the effects are still rattling around my brain.

* I vastly overestimate the value of my so-called skill set.

* I really need to get into better shape.

* Seattle really was robbed of a Super Bowl title by poor refereeing and I should try to fix it.  (I threw up in my mouth a little bit, just typing that.)

* I secretly think I’d look good in sea-foam green or whatever hideous color that is.

* I should avoid hanging around with groups of large men, out in the woods.

Yeah… it’s probably the last one…

I checked in with Sitcom Kelly, to show her a draft of my post, and to see if she’s the one behind all this.  Turns out that because she’s been gorging herself on the 30 Rock DVDs I loaned her, she’s been having dreams about Tina Fey.  So we have agreed to switch dreams.

I can see it now, she’ll get a hillside full of athletes and I’ll get “Liz Lemon,” safely contained in a basement pit.  I bet she’d love my ziti.

Next, I just have to get Sitcom Kelly to watch some DVDs of “So You Think You Can Dance”.
Posted by bluzdude at 7:01 PM

Are you sure you didn't have a clubbed foot, like Tom Dempsey? You could definitely beat him in a race.

Only in the 40… he’s probably take me over distance, because I’d be on my hands and knees after about 75 yards.

"I bet she’d love my ziti" is the single most sexy euphemism I've ever heard.

But that wasn’t even a euphemism! That’s the running joke; that Sitcom Kelly keeps her Pit captives content by plying them with ziti. But now I can totally see the euphemistic possibilities. I can use that as a pickup line…

“Hey baby, how’s about you come back to my place and sample my ziti?”

Love your dream analysis at the end.

Maybe your dream is telling you to hang around more women. Just think of the possibilities if you were drafted into a women's football team.

Other than when I go home to Ohio on vacation, all I hang around are women. Can't be that... Maybe it's saying I need to find more guy friends. But then, there are only so many dick jokes to go around...

Getting drafted onto a women's football team might not be all it's cracked up to be. I'd probably get pummeled by young jockettes, leading to years of relationship therapy.