Last night I went to see the Baltimore Orioles/Seattle Mariners game at Camden Yards.  (That’s why it took me so long to answer your comments from the prior post.  I can’t access Blogger comments from work.)  Normally when I want to see a game, I just walk down after work and get tickets at the window.  But last week, my friend Kelly said she had a pair of tickets from her mother’s workplace and asked if I wanted to go.  These seats are 10 rows behind home plate, so of course I wanted to go.  There’s nothing like a baseball game on a nice, crisp, spring night. 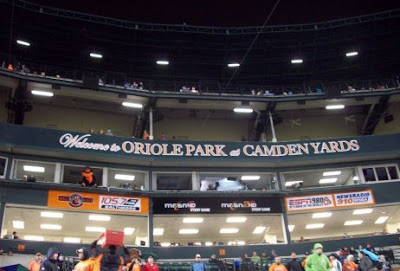 With the Orioles current record in mind, even the Oriole Bird is about to jump.
But on the other hand… 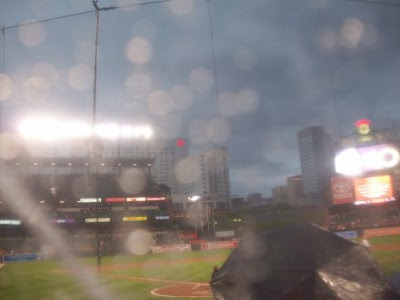 Shot from inside my rain poncho.
This was not a nice, crisp, spring night.  We had rain all afternoon, then off and on all night.  What better kind of weather is there to see a couple of doormats have at it?  It was also a good chance to see Ken Griffey Jr. before he finally retires and Ichiro Suzuki, before he actually smiles. 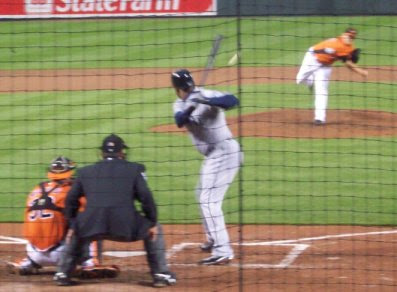 Griffey at the Plate.
Little known fact:  Ken Griffey Jr. is the only player to have hit the famous Warehouse in right field.  He did it in 1993 during the All Star Game Home Run Derby.  No player has ever hit it during a game. 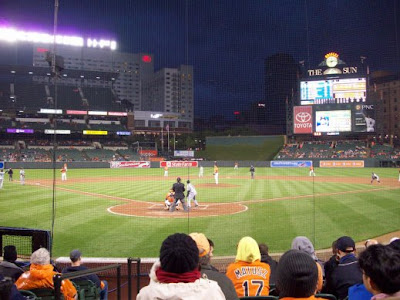 As always, I was hoping to snag a foul ball, but nothing was anywhere close.  (For full details on my other home run/foul ball catching attempts and exploits, see this post from last June.)  It was just as well… it’s hard to catch a ball with a poncho over your arms.  Perhaps I could have just made a big apron-basket out of it and hope it didn’t plunge right through and break my toe.  I tell you, it may have kept me dry, but wearing that thing was like being in a full body-condom. 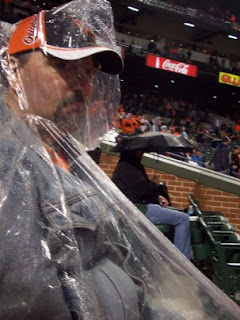 Not amused.
It wasn’t the most exciting game ever, but we have ways of keeping ourselves amused.
First, I noticed that the Orioles have two guys named Miguel Tejada and Ty Wiggington batting back to back.  A guy named Chone Figgins was playing for the Mariners.  I then posited that the O’s should trade for Figgins, for no other reason that he can bat immediately before Miguel and Wiggington, so that the lineup card can read, “Figgi, Miggi and Wiggi.”
My friend Kelly is the same person with whom I’m collaborating on stories for a prospective sitcom based on her life.  I wrote about the development of one of our stories in this post from March, the one about the “bacon-wrapped kittens.”
Because just about everything we do ends up as a sitcom idea, it wasn’t long before we started brainstorming ideas for ballpark-related things we could have her TV clone “Kelly” do.  This is what we came up with: 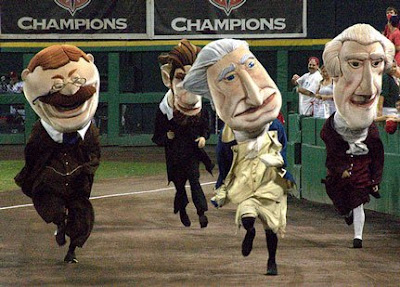 All parks should do like they do in Milwaukee and have giant racing hot dogs, sausages and brats.) 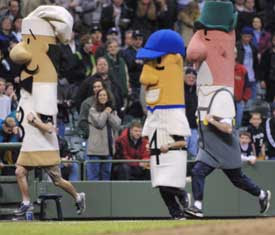 Kelly gets into one of the costumes and gets onto the field for the race.  Except she doesn’t really race, she kind of chases the cute shortstop around the infield.  The other sausages start chasing her around and they all end up in a giant sausage pile.  (Cassie, you can play a sausage, if you want.  I know how you want to act.)  Then the cops show up and she runs to elude them, until they tase her.  It doesn’t work, of course.  She just picks the darts off her giant sausage costume and continues running, finally disappearing through an outfield wall door.
“Hey, how’s it going?  Whatcha up to?  Eh, I’m just hanging out…”
Meanwhile the team’s manager is trying to call down to get someone to warm up and keeps getting a busy signal, begins smashing shit in the dugout…
I figure that’s enough for one episode.  I don’t know how we’re going to get all that done on our budget.  (Our Budget = 12 cents, a subway pass, the iron from a Monopoly game and a donut.)
But since we’ll never actually make this thing, why not dream big?
Apology:  For those uninterested in anything sports-related, let me direct you to some Bluz Classic from March 2009, i.e. The Time of No Readership.  I did a two-part series on great movie villains:
Part 1 – Monsters
Part 2 – Comedic Villains, Character Villains
Posted by bluzdude at 7:01 PM