I was really looking forward to watching the Olympics that are playing out right now.  I’ve been an Olympics fan ever since I started watching, back in 1972.  (While the ’72 Munich Olympics brought the stain of terrorism to the games, it also brought women’s gymnastics to the forefront, with Olga Korbut.)  I love to root for my country’s athletes, and failing that, the cutest available foreigner.

I’ve been watching these games every night, but somehow, something seems to be missing.  And I’m not even talking about them being pre-recorded.  I have to cut NBC some slack for the tape delay.  They didn’t shell out mega-bucks to land the broadcasting rights, just to run them on weekday afternoons.  (Granted, they should be broadcast live, over the weekends.)

What I’m saying is that I haven’t seen anything that really gets me excited.  Maybe it’s a Phelps hangover.  Or maybe the best storylines haven’t played out yet.  But it seems like there were so many huge moments in prior Olympics that these pale in comparison.

So I thought I’d dig back into my ancient, cobwebbed memory banks and come up with my favorite Olympic memories, for both summer and winter games.  These will appear in no particular order.

* The 1976 Olympics, both summer and winter, were what cemented the games into my consciousness and made them ‘can’t miss’ viewing.  The main reason was Nadia Comaneci.  Lordy, I had such a crush on Nadia… cute as a button with those smoldering dark eyes and flawless technique.  We were about the same age, so to me, that made her much more attainable.  I didn’t even care that she spoke no English.  I was sure that we could make our feelings known in any language.  All I needed was a lift to Montreal. 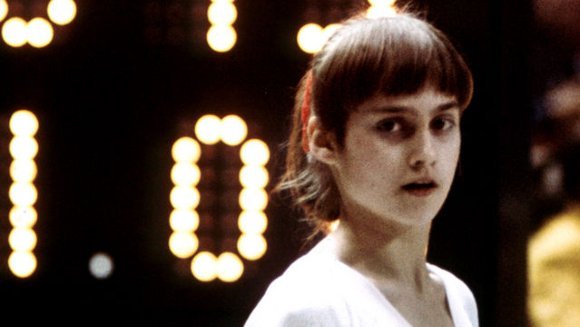 * One thing I miss about the more recent Olympic broadcasts is that boxing is banished to the side-channels.  In 1976, the USA had the most badass boxing team ever, winning 5 gold medals and featuring names like Sugar Ray Leonard, Leon and Michael Spinks, Howard Davis and more.

While most of the public attention was on Sugar Ray (for good reason), my favorite was Leon Spinks.  He had that huge gap in his mouth where front teeth used to be, and fought with a straight up style, his chin tucked down on his chest.  He wasn’t as polished as the European fighters, but he just destroyed whatever was put in front of him. 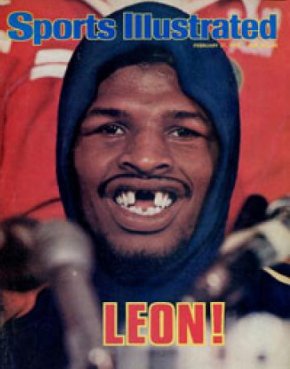 One of my favorite sports memories ever was the night Leon beat Muhammed Ali for the championship.  Was the first time in ages that I had seen Ali lose.  I watched the fight late at night, all by myself and celebrated wildly, but quietly, because Mom and Dad were upstairs asleep.

* The other 1976 event that sticks was in the Winter Games, watching an Austrian skier named Franz Klammer win skiing gold in the “downhill.”  I’ll never forget the sight of him flying down the mountain at 90 mph, barely under control, with arms and legs splaying out every which way.  I don’t know beans about skiing, but I never miss the Olympic downhill.  That’s some serious shit. 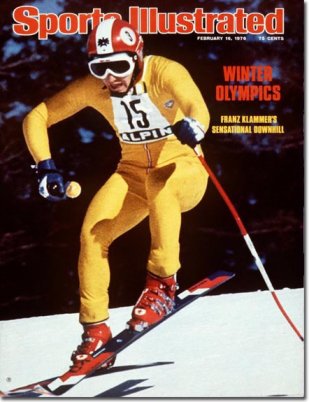 * I know it’s passé to talk about the 1992 US basketball ‘Dream Team,’ but at the time, I was 1000% behind them.  I remember the US getting famously robbed by the Russians (and the refs) in Olympic basketball in 1972, and then in 1988, finishing with a bronze.  What bugged me was that we were sending out college kids out to do battle with the full-grown, Olympic-experienced veterans of the rest of the world.  It was like playing with an arm tied behind our back.

At the time, the Russian, European and South American teams were their country’s de facto professionals.  So when the IOC evened the playing field in 1992, I thought it was about freakin’ time.  The Dream Team did not disappoint.  That was probably the best basketball team of all time, even with Larry Bird playing at about 30% due to back trouble.  No matter what LeBron says now, prime against prime, they couldn’t hold the ’92 team’s jocks.

* I always loved watching our star women’s gymnasts, from Mary Lou, to Shawn Johnson and everyone in between.  How can you not get caught up with those little iron-bodied pixies wearing ponytails and glitter?  But I’ve never seen a moment like the one when Kerri Strug had to hit that last vault after injuring her foot.

She knew it was going to be bad, but her coach said (erroneously, it turned out) that her team needed her to vault in order to secure the win.  So she got her leg wrapped, sprinted down that lane and hit a damned-near perfect jump, essentially on one leg, before collapsing onto the mat.  These gymnast chicks are tough! 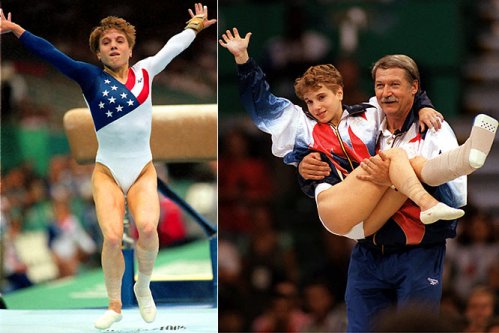 * I love the track sprints, especially the 100 and 200 meters.  I never thought anyone would ever beat Michael Johnson’s time.  He was head and shoulders better than everyone he ran against.  He ran like Leon Spinks fought… straight up and down.

Then in the last games, Usain Bolt from Jamaica made Johnson look like a lumbering offensive lineman.  He broke records with ridiculous ease, even when pulling up to celebrate, before the race was even over.

I’ll also never forget Florence Griffin-Joyner, or “FloJo,” for short.  She was the first to bring style to the track.  With her long nails, flowing hair and flashy track suits, she became an instant star.  Plus, there was that “back.”  As my Dad said to me the day after she ran, “She’s got a butt that could pound nails.” 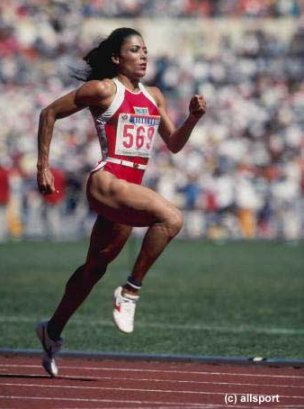 * I don’t follow soccer at all, except a little bit during the World Cup or Olympics.  But I really got into the US women’s soccer team when they won the World Cup in 1999 and Olympic gold in 2004 (and also 1996 and 2008).  Smokin’ hot jock chicks with iron thighs, flat tummies and unbelievable resilience and will to win?  What’s not to like?

* Speaking of smokin’ hot jock chicks, how can a red-blooded dude like me not enjoy watching the premier beach volleyball pairing of all time, Misty May and Kerri Walsh?  (I use their maiden names because I still pretend they’re not married, with children.)  And how can I not enjoy that they wear little tiny bikinis that floss their pancreas while playing?

I like volleyball in general because it’s something I used to be pretty good at when I was younger.  With some actual training, who knows?  (I would have looked considerably less good in the bikini though.)  But I know enough to know that what these women do out there is amazing, throwing their bodies all over the place to dig spiked balls out of the sand.

I especially like Kerri Walsh because she’s freakin’ 6’2”!  That’s about what I am, so we would be able to go eye-to-eye.  I dated a girl, once, that was 6’1” and that was the weirdest thing.  When you’ve spent your life looking downward towards the objects of your affection, it’s unnerving to suddenly have one right there at eye level.  But you get over it pretty quick! 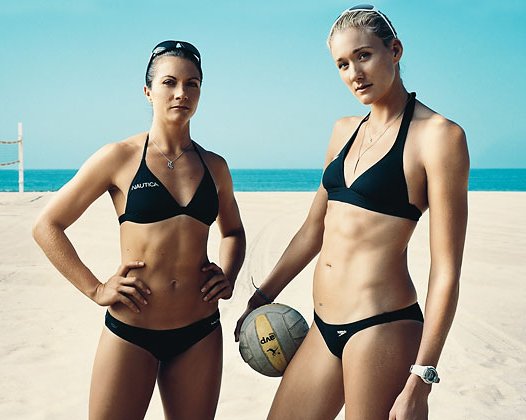 * Michael Phelps gets a hell of a lot of play around Baltimore, as it’s his hometown and training center.  So I admit that there’s some overkill at play here.  Still, I was as thrilled as anyone over his eight gold medals in the 2008 Olympics.  But my favorite one of all those was that 4 x 100 freestyle relay, where the US anchor guy, Jason Lezak came from a full body-length behind on the last stretch to juuuust out-touch the French swimmer at the wall.  It was an amazing display of teamwork, without which the Phelps saga would have been derailed at the 2nd event.

* I wrote about my feelings on the 2010 Olympic hockey tournament back when it was going on.  The US faced Canada for the gold medal and I was torn between rooting for the US or for my favored Pittsburgh Penguins who played for Canada.  Turned out that the US played well and forced overtime, but Penguin captain Sidney Crosby banked the winning goal on a brilliant play (and feed from Jerome Iginla).  I was so happy for my guy; I couldn’t be too broken up about the valiant US effort resulting in a silver medal.

* For me, all Olympic moments pale badly in comparison to the 1980 US hockey team… the one that beat the unbeatable Russians.  This was another example of our sending out our college kids to take on full-grown men… the best the world had to offer.

I remember watching that game in our living room with my brother and dad. (On tape-delay, as it were!  The game was played at 5:00 pm but ABC held it until prime time.  They tried to move playing the game to 8:00 but the Russian team refused.)  I remember when the Americans scored on a breakaway, right before the first period ended, thinking we just might have a shot.

Turns out we had more than “a shot,” as we out-hit and out-skated the best team in the world.  When Mike Eruzione wheeled around the slot area and fired that wrist shot off the wrong foot that beat the goalie and claimed the lead, we went absolutely berserk.

But there was still 10 minutes left in the 3rd period, and watching it drain away in slow motion was excruciating.  But when as the clock ticked down the final 10 seconds and Al Michaels asked us if we believed in miracles, it felt like we were right there in the building, celebrating with the rest of a country that desperately needed a win.

Veteran ABC announcer, Jim McKay, said afterward that this upset was akin to the (recently crowned 4-time champion) Pittsburgh Steelers losing a game to a bunch of Canadian college students.  To this day, I still can’t watch film of that goal without choking up.  Brings tears to my eyes every single time and I don’t see that changing… ever.  I have a VHS tape of the entire game that I really ought to knock off onto DVD somehow, so that I can easily revisit the experience, long after VHS players become rarer than a sense of dignity on a dating reality show.

So what about you?  Do you have any particular Olympic moments that still stand out for you?
Posted by bluzdude at 5:56 PM