I've talked about a lot of subjects here over the years, but I've never really addressed the inevitable topic for this weekend: the school shooting at Sandy Hook Elementary, where 20 children and 6 adults were killed by yet another deranged gunman.

We have to do something about guns.  After events like this, the first thing we hear is “now is not the time.”

If “now” isn't the time, when is the time?  We've already had mass shootings in a college, a movie theater, a couple of high schools, and right out on the street corner where a US Congresswoman got shot in the face.  What has to happen before we have a rational talk about guns in this country?  Twenty little kids just got murdered by another psychopath.  Must we wait until some brooding nut-case shoots up a nursery?

These were little kids!  Kindergarteners and first graders!  What the fuck?

The problem is every politician in America is scared shitless of the NRA.  They know that supporting any legislation that has even a whiff of gun control is tantamount to political suicide.  And if there’s one thing politicians hold more dearly than children’s lives, it’s their own political careers.

We have a very serious gun problem in this country, where it is no longer just about defending ourselves; it’s a whole fetish.  This gun culture has been lifted to an almost sacred level, despite the tens of thousands of lives lost via bullets.

Yes, I know the knee-jerk argument: “Guns don’t kill people, people kill people,” and many other glib bumper sticker sayings that mean the same thing.  But why do we have to make it so goddamned easy to kill so many?  Of course a person can kill another by any number of means, no question.  But how often do you hear of a mass killing with a knife?  Or a baseball bat?  Or a car or any other lethal means?

I don’t buy the frequent counter that we’d then have to ban knives or box cutters or letter openers.  A killer using any of those things can be stopped long before 5 or 10 or 20 people are killed.  That is the difference.  Only a gun allows a lone psycho to murder so many so quickly and easily.

I know, what about bombs?  Bombs can do the same thing quickly and easily.

That’s true, but there’s also a trail.  In the post 9-11 world, it raises questions when someone buys a truckload of ammonium nitrate, or frequents bomb-making websites and chatrooms.  There are opportunities to intervene before anything blows up.

There is no intervention with these lone gunmen.  I saw someone on Facebook asking how it’s possible for a guy to get these weapons into a school.  I didn't respond, but I was thinking, “Are you fucking kidding me?  It’s a cakewalk.”

Most schools don’t have metal detectors or pat-downs, or security of any kind.  And even if someone tried to stop an intruder at the gates, he would merely become the first casualty.

Another argument is that there should be more guns, not less, which to me is like saying the answer traffic gridlock is to produce more cars.  Too many people believe the Hollywood hype that you can have a shootout in a public place and just take out the bad guy.  The general gun-carrying public is not trained for crowded shootouts.  Sure there are some well-trained exceptions, I’m thinking ex-military, but they are few and far between.  There’s a big difference between hitting a target on a range versus hitting a single, armed target amid a swirl of chaos, noise and rushing bodies.

There has to be some kind of middle ground between all guns and all ammo allowed to everyone all the time, and no guns for anyone ever.

The problem is that we’re boxed in right now.  The gun lobby is right about one thing.  If guns were made illegal, the only people turning them in would be upstanding, law-abiding citizens.  Next thing you know, we’re living in a Batman movie.

I say we have to start with re-enacting the ban on assault weapons and ammo and make it stick… no expiration date.  No one needs that kind of firepower for home protection.  No one.  Nor do hunters.  No one needs those giant ammo clips either.  The only thing these guns are good for is killing a large number of people at once.

Just because this restriction won’t solve ALL the problems doesn't mean it won’t fix SOME.  And some is better than none, when it comes to innocent lives being taken.

Further, we have to do more to regulate who guns go to, at minimum doing more than what we do to hand out a driver’s license.  I’m thinking proficiency, IQ and psychological tests.  There needs to be a criminal records check as well.  It’s appalling that we do more to check into a person who wants to operate a common device with a positive use, but is potentially dangerous, than we do with a person that wants a device whose singular purpose is to kill living things.

I don’t think there’s a chance in hell of the NRA ever letting that happen.  In this day and age, they will fight anything that comes between them and their “right” to obtain any gun for any reason right fucking now.  To them, the Constitution is made up of the 2nd Amendment, and then everything else. 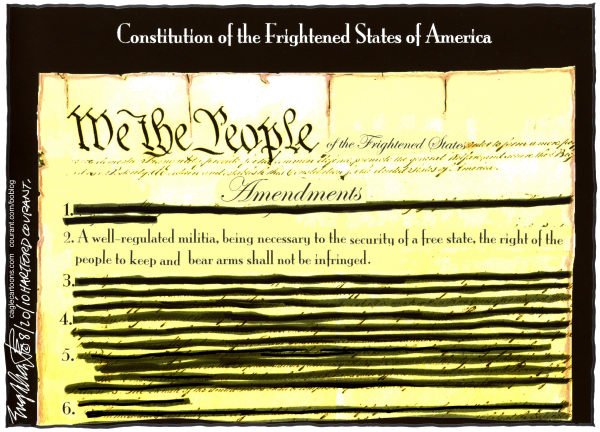 It’s funny how conservatives are always saying we need more “Constructionist” judges, (as in interpreting the Constitution exactly the way is was written).  Obviously, this doesn't apply to the 2nd Amendment, or else everyone would have the right to a single-shot musket and powder horn.  But where’s the fun in that, right?

Maybe one day we’ll see some politicians grow a pair and take on the gun lobby to try to enact some kind of common sense limitations.  And granted, any attempts to rein in automatic weapons and large clips will take time to produce the desired effect.  And in this age of immediate gratification, any delay in results will be portrayed as failure, in order to justify a return to the way things were.

In the mean time, our little kids are getting slaughtered at school.  There’s some more of that “American Exceptionalism” for you.  Yee haw.

Late Update: My dear friend Cassie sent me a link to an article that makes many of the same points I made, only better and more clearly.  Granted, that bar is not set very high, but I'm glad to know that I'm not off base here.  Check it out by clicking here.
Posted by bluzdude at 12:14 PM