When Little Girls Grow Up

I've got a big weekend coming up, featuring the wedding of a dear friend of mine.

I've written a bit here about Jennifer before.  She’s the one we used to prank by slightly moving things around in her orderly cube, and secretly swapping out her pristine red binders for torn, sloppy black ones.  She’s also my friend that had her house broken into and burglarized several times, right around the time her job was eliminated.

Jenn joined our staff in 2002, coming straight out of college.  She instantly brought a breath of fresh air into our stuffy department.  Jenn and another new girl kick-started a whole period of great after-hours gatherings of fun and merriment. 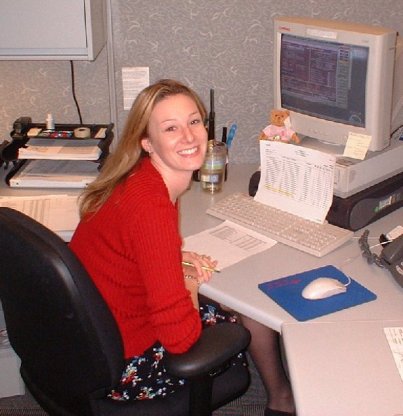 Jenn is significantly younger than I am by a solid 18 years, which is a fact she takes great joy in reminding me whenever I tell an old story.  Nevertheless, we bonded right off the bat.  I've always tried to look out for her and give her the benefit of the hard-won wisdom my advanced years have given me.  She may be a die-hard Ratbirds fan but she has a huge heart and all the loyalty and integrity in the world.  To me, she’s someone that I feel duty-bound to protect and shield from harm.

When she first joined our department, she was a real Wild Child.  Sure she was smart, organized and composed, but she took great pleasure in shocking the crap out of people by doing things like dropping the occasional “C-word” into a casual conversation.  (The male-oriented C-word.)  Sometimes she’d come out to lunch with my brother and me and some of our buddies, and they’d do spit-takes over some of the things she said.  I was so proud.

Back when our company still threw a lavish Christmas Party, Jenn and I always went together.  It became our tradition.  We’d be all dressed up (it was the only time all year I ever wore a tie), and I’d always wear my long wool coat and black fedora.  I loved walking in there with Jenn on my arm; we’d always turn heads.  I assumed everyone was thinking, “What’s the hot chick doing with that old fuck?”  They probably thought I was her Sugar Daddy.

She’s reined in the Wild Child over 10 years’ time and grown into a model of decorum and professionalism.  When our original department folded last year, I was relieved that she was able to latch onto another job in a different department.  I tried to get her into mine, but we never had the right opportunity open up.

So while we no longer work together, we still see each other around the building and go out to lunch every so often.  No matter how long it’s been, we always slide right into our easy rapport.  I never know what the subject of the day is going to be, but it’s always entertaining.

We also had some lingo to work out.  What I call the “leggy” pieces, she calls the “drumettes.”  I think “drumettes” are the girls that follow Tommy Lee around.

I didn't think they were baby chickens, because we would have heard all about it from PETA if it were true.  I was sure that they weren't the wings from full sized chickens, but I also wondered why when you get wings from a Chinese restaurant, they were always HUGE!  Maybe those were the regular chicken wings and we really were eating baby chickens.  It was enough to make my head spin.

I later did some research online and emailed my findings to Jenn.

Bluz: This seems to be the consensus…

“Baby chickens don't have much meat on them because they haven't learned to fly yet.
Buffalo wings are made from regular chicken wings. They take the tip off and separate the other two parts and use them. So each Buffalo wing is like 1/3 of a real chicken wing.”

And that means that the leggy ones aren't really legs, they’re part of the wing.  My world suddenly makes sense again.

Bluz (followup): OK, this has the most complete range of answers…

And apparently, the larger “Chinese” wings just come from larger chickens.  And it confirms that a full wing is made up of 3 segments, the tip (or inedible part) the double bone piece, and the drumette.

So there, you may put your mind at rest, that we are not devouring baby chickens.

Jenn: Hmmm… very interesting.  They have no remorse for killing cats and dogs but even they won’t kill baby chickens.  Maybe (the large wings are) to make up for the fact that Chinese are typically small?  The chickens being bigger than usual may be a compensating factor.

Bluz: Kind of like the way Americans drive SUVs.

Jenn: Exactly.  Little person, big chicken.  I wonder if they also make bratwurst.  Or maybe they do and we've just never seen them because they’re too good to let them out of the country without heavy tariffs.

Bluz: Maybe Wisconsin is doing the same thing, just to mess with Minnesota. Jenn: Neat!  I’d like my next order of radius and ulna extra crispy please!  Gee, I wonder why those terms never caught on.  “Wingys” it is… 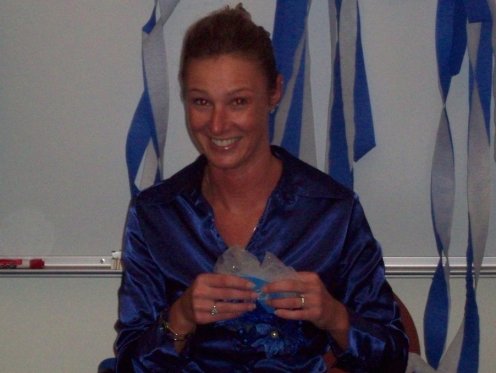 Besides a Bed, Bath and Beyond gift certificate, they got her a bottle of tequila and a Margarita Machine. 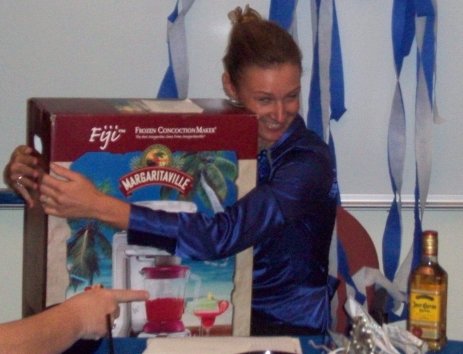 This one’s a hit.

When I sent some of the pictures to Jenn, she started telling me about the tight timing her church was making her stick to before the wedding ceremony.

Jenn: I'll be arriving with the girls at 12:15.  Sounds like a short time to me but the church was specific that they didn't want me there until 15 minutes prior.  They're making it sound stealthy too saying they'll send someone out to make sure the coast is clear in the vestibule before I come in otherwise I can hide in the confessional, lol!

Bluz: Try to hide on the priest’s side of the confessional.  I've always wanted to know if they have some kind of Penance Conversion Chart in there.

Bluz: Scenes from a Confession

I've already given Jenn her wedding present.  I’m not going into detail about it but it made her cry.  Call it a preemptive strike, because I know I’m going to be a mess, watching her walk down the aisle to marry the luckiest guy in the Mid-Atlantic.

The little girl is all grown up now.

Director’s DVD Commentary: The reception is downtown in the afternoon, so Pinky and I are staying the night at a hotel within crawling distance.  I was going to wear my long wool coat and fedora, but it’s expected to be around 60 degrees.  I’ll be a big enough of a mess, without adding flop sweat to the equation.

I’m going to have to step on it Sunday, though, because the Steelers game won’t be on local TV.  To get a seat, I’ll have to get out to my local sports bar by noon.  It’ll be like, “Sorry we can’t have breakfast, Pinky… I got to GO!”

Anyway, what I’m saying is that I probably won’t have a post up this weekend.  I’m sure you will be able to adjust…
Posted by bluzdude at 7:04 PM

She's holding onto that margarita machine like it's her long lost baby or something. Hope you have a great time at the wedding and don't cry too much. :)

That's so funny... I looked exactly the same way when I got my margarita machine too!!! :o)

Well, it WAS on the registry...

You have a knack for writing these sweet and meaningful odes to the people in your life. If it were anyone else I'd assume that the person in question had died because the way you show appreciation for your friends, co-workers, relatives, etc. is so rare that most people don't even express those feelings until they're gone. Jenn sounds like a terrific gal, and I hope the "luckiest guy in the Mid-Atlantic" is equally awesome.

This goes directly to what I was trying to tell you in my comment on your last post. We need to let the important people in our lives know how much we value them. Once you start doing it, it can get addictive. Unless, of course, they think you’re an asshole.

Early in my blogging life, I wrote a 4-star tribute to my best buddy, (“Brill,” January 9, 2010) on the 9th anniversary of his passing. I wish like anything that he could have been alive to see it. Now I don’t usually go around writing mushy tributes; but I won’t keep from putting down some nice words from time to time. It’s good for the soul.

As for Jenn, she is most definitely a terrific gal and she has chosen wisely. Her beau is a good fit with her and I think she’s in good hands. He’ll watch out for her, while letting her take the lead with things. The funny part is that he is significantly younger than her, so all the age cracks she’s made about me over the years are now coming home to roost.

OMG I wanted to say the same thing!!! It was like her tequila life line.

Jenn is good at playing to the crowd.

I'm far from orderly, but I do have a freaky ability to sense when my things have been moved, which resulted in many an awkward conversation between my last roommate and me. (He was Asian with stick-straight hair, yet I always noticed him using my curly hair shampoo. And also my soap. Gross.) So, awesome prank.

Be sure to click the link to where I wrote up the full story of that prank. It really was a masterpiece. I just wish I could claim full credit. It was my buddy’s idea to slightly move her stuff and switch out the binders. Once I found out what he was up to, I contributed further suggestions to help with the torment. A couple of evil geniuses, we were.

As teenagers, I used to hate it when my brother would use my contact lens saline. It wasn’t that he used it, but that he took it out of the upstairs bathroom to the kitchen to use it, and left it there. Every time. After many loud squabbles, I had to start taking it with me back to my bedroom, and let him get his own freakin’ saline.