Director’s DVD Commentary: Next month, my Grandpa is turning 97.  It’s really amazing… the dude is a real piece of work.  Ever since he hit 90, I’ve been telling everyone that he’s a shoo-in to make 100.  And you know how I hate being wrong…

Anyway, to mark the occasion, my cousin’s wife asked a bunch of us to send her some material… pictures, stories, memories and whatnot, so she can have it made into a hardbound book.  Naturally I loved the idea.  Not only do I have a warehouse of photographs, you KNOW I love to tell stories.  My challenge was to not over-do it.  I just hope that enough other people send sufficient material so that my thing blends in, rather than dominates.

My original idea was to recycle the post I wrote a few years back, regarding the story of how as a kid, my dad got picked up by the local cops for jumping trains, and Grandpa refused to come down to the station to get him.

Last night I got it all written up and adapted for the book; I just wanted to review it with fresh eyes today before I sent it in.  It wouldn’t do for the Family Blogger to submit a story full of typos and awkward grammar.

But then I had to go and sleep on it.  By morning I had decided to scrap the original idea completely and write something more nostalgic.  And because I never keep anything I write to myself, you can have an early glimpse.

So let me tell you about my Grandparents…

There are so many memories associated with my Grandma and Grandpa, from early childhood up through becoming a creaky old grownup.  I’m betting that most of these will be shared among all of us that grew up visiting their tidy little home in Coraopolis. This is what I remember from our weekly visits, when we still lived in the area, to our annual visits for holidays or reunions.

It starts for all of us in The Lap… Grandpa’s Lap at the head of the table.  Newest baby gets the spot, where he learns how to dunk biscotti in coffee or wine.  I don’t think any of us actually remember being on the lap, but we remember the next youngest kid that displaced us, sitting there.

We older-generation grandkids remember the movie lights.  Grandpa took 8mm movies every Christmas, which were always accompanied by the blindingly bright movie light.  I think the light was so bright so that after it was turned off, the grownups could watch us stumble into things.

In watching some of those movies later, I realized that it was all actually the same movie, repeated over and over:

“Here’s some squinty kids opening presents.  Look who’s coming in the door…everyone say hi!  There’s the baby, sitting in the middle of all the presents.  Time for dinner… look at all the food!  Everyone wave… now let’s eat.”  Then the next year… “Slightly older blind kids opening presents… hey, there’s a new baby… look at the food… Everybody wave…”  Repeat indefinitely…

When we’d visit, the first stop would invariably be the basement; that’s where all the toys were.  I’d always be amazed at the floor.  It was always painted, and so clean you could eat from it.  We’d head straight for the shelves that held the puzzles, blocks, Lincoln Logs and board games.  Sometimes I’d wander through the other section, through the amazingly organized workshop, to the wine cellar.  I loved the sharp smell of the old wooden barrels.

That reminds me of the other favorite pastime: caging sips of the grownups’ drinks.  It wasn’t very difficult, the grownups always obliged, except that one year when they were finishing off the last of Grandpa’s home made wine from 1962.  No sense wasting the Good Stuff on the children.

As the oldest of all the grandchildren, I always tried not to make the “strong drink face,” or else I figured they wouldn’t give me any more.  I wanted to be a Big Boy.  I remember being so happy when I was finally old enough to participate in the post-Mass eye-openers.  After getting back from church, Grandpa would break out the Jack Daniels or Crown Royal and we’d all get an eye-opener shot.  Then Grandpa would say, “Well, we have to open both eyes, don’t we?” and then pour us all another shot. 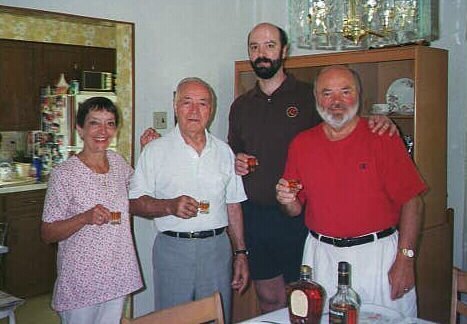 
I always remembered the back yard as being so big… we’d play football or wiffleball there, and it would cause a stampede if we hit the ball over the hedges.  We’d have to run out to the street and try to stop the ball before it rolled down the hill and into the sewer.

It wasn’t until I visited as a grownup that I realized that the yard wasn’t that big at all, and most of it was taken up by two things.  First was the garden.  Grandpa’s garden was a work of art.  He grew enough stuff to stock a salad bar all summer long. 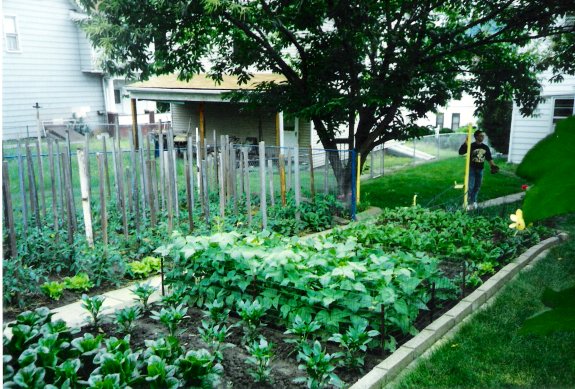 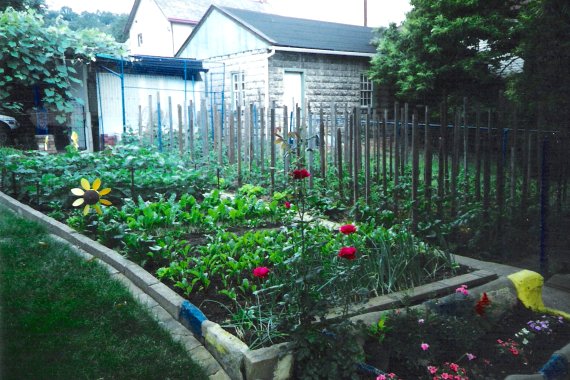 These shots were from 1992, so Grandpa was in his mid 70s.  At that point, he was taking it a little bit easier.  You can tell because the tomato stakes aren’t all the exact same height, nor are they all painted the same color.  But what you can’t see are the boards laid down between the rows, so he could walk between them securely and care for each plant.

As for weeds?  There were no weeds.  Ever.  I think that whenever a weed dared poke up out of the ground in Grandpa’s garden, he’d stick his head out the back door and go, “Hey, what’choo doing over there?  Get outta here!”

The weed would zip right back into the ground.

I should note that my dad did NOT inherit the gardening gene, as evidenced by the year he used his golf clubs for tomato stakes.  He said it added iron to the soil.

There also used to be a large apple tree in the middle of the yard that yielded the biggest, tartest green apples around.  Sometimes we’d actually race through dinner just to go outside and pick a giant apple or two for dessert.  (Of course I’d have to spend the next day on the pot, but it was totally worth it.)

I didn’t do that for very long, because I quickly learned that the dinner was where it’s at.  Grandma always put out enough food to feed an army.  As soon as we’d arrive from out of town, a huge spread of cold cuts would appear, along with her homemade wedding soup.  I’d build myself a sandwich the size of my head.  And then we still had to eat dinner a few hours later.  It was a dream for a growing teenaged boy.

Don’t even get me started on the Christmas Eve Feast of the Seven Fishes.  Best meal of the year, every year.  Man, I miss the smelts.  And the cookies!  All the ladies in the neighborhood would bake dozens of their favorite cookies and then trade them all around.  All of us kids had our favorites… mine used to be the “ravioli” cookies, which looked like raviolis, but had chocolate filling instead of meat or cheese.

Another treat was that we got to have pop with dinner, which we never got at our house.  But Grandma and Grandpa would have those variety cases of orange, grape and cream soda in those returnable 12-oz bottles.

Some summers, my folks would leave us there while they went off for some no-kids time.  We always had a ball and enjoyed the uninterrupted Grandparent face time.  I still remember sitting out on the front porch, drinking our orange pop and listening to Bob Prince call the Pirates game.  We also liked to walk down the hill and watch the trains go by.  It was always soothing to me to hear them go by at night, from up in the guest bedroom.

In the wintertime, Grandma always knitted us slippers, usually in black and gold.  My brother and I constantly wore out the bottoms, necessitating the new models.  I wore them well into adulthood.  I’m sure Grandma never expected to be knitting size-12 slippers.  I still have my last pair, holes and all.  Even though I can’t wear them, they’ll always have a place on my bedroom floor. 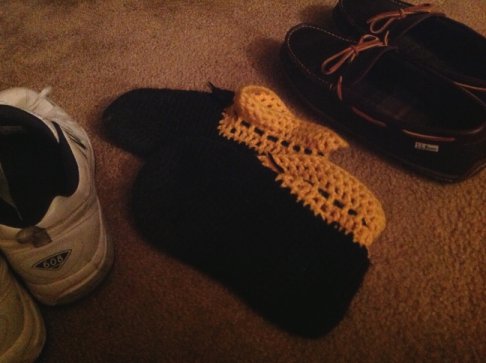 When I was managing record stores in Cleveland, Christmases used to be the worst.  Life in retail was crazy during the holiday season, but the saving grace was that on Christmas Eve, I could close up shop and set sail for Pittsburgh.  I’d roll in to Grandma and Grandpa’s about 9:30 and Grandma would be ready with soup and sandwich while Grandpa brought a cold Iron City Light up from the cellar.  And Grandma always had Klondikes for me when she knew I was coming.  At the time, they weren’t yet available nationwide.

That would be the first moment in months that I’d just be able to sit and breathe, and catch up with these two dear people.

My grandparents were the rocks of our family, then and now.  They were always there for us, always helpful and always with the right advice.  Usually it was just to work hard, be honest, do your job and always do the right thing.

Not to mention there’s nothing that can’t be fixed when you come together around a table full of good food and wine.
Posted by bluzdude at 7:05 PM

Email ThisBlogThis!Share to TwitterShare to FacebookShare to Pinterest
Labels: The Burgh, The Family Business