Mentioning my buddy’s daughter Kia, in my prior post about redheads, got me thinking about another old story.  I've mentioned it before in passing, but I thought it warranted its own post.

I've written before that I’m like an uncle to my buddy’s kids; in fact all of us from our little circle of friends are uncles to each other’s kids.  We've been like brothers to each other since high school, so the “uncle” thing just followed.  Especially after my divorce, the highlight of every year for me was to fly out to Toledo and spend time with my buddies and their kids.  We always had great fun.

But in 2001, when Kia was 10, her parents put her on a plane and she flew out to visit me here in Baltimore.  It’s really kind of amazing that it ever came to pass, especially in this age of hyper-sensitivity toward child abuse.  A 10-year old girl flying across the country to visit a 40-year old man?  Sounds weird, I know.  But it wasn't.  Hell, it wasn't even my idea…

I think the plan started during my visit in the summer of 2000.  I don’t remember who brought it up, but I know I said it was fine with me if she wanted to come out and visit.  I think she took it from there.

In 2001, my Toledo trip was going to be in September, which was later in the year than usual.  We were planning a big “Barn Reunion” at Rik’s house, where all of us old neighbors from back in the day, who used to hang out in our Barn, would get together for a big party.  With our dear friend Brill passing away that January, (12 years ago, last Tuesday) we felt like we needed to get everyone together again while we still could.

So earlier that year, Kia began campaigning to come out and visit.  I know that she was offered a choice between going to some kind of horse show in Columbus, or coming out to see me, and she choose the latter.  I was really kind of surprised.  But the next thing you know, I’m on the phone with my buddy and we’re working out the logistics.  He found that the best deal would be for her to fly out of Cleveland and spend 5 days, so that’s what we did.

Long after the fact, I heard that there was quite a bit of consternation coming from her mom.  That bothered me because she’d known me for quite some time.  I think she was channeling the anxiety coming from her parents, who barely knew me at all.  I don’t think they saw anything but a 40-year old guy, a 10-year old girl and eww.

Memo to all Internet reading people: Not everyone is a perv.  That is all.

Anyway, Kia wouldn't be denied, so off they went.  They loaded her onto Southwest Airlines in Cleveland and she was delivered to me here at BWI Airport.  I even had to sign for her, like she was a UPS delivery.

I had arranged to take time off in and around the 4th of July to accommodate her visit.  Five days is a heck of a long time to keep a kid entertained, just one on one, so I planned a bunch of activities and adventures.  In fact, I probably did more stuff that week than I had during my first 3 years here.

We took at least two subway excursions into downtown Baltimore and the Inner Harbor.  The first stop was the ESPN Zone, which had the most amazing game room.  It was there I realized that Kia was part monkey.  I figure she gets that from her dad. 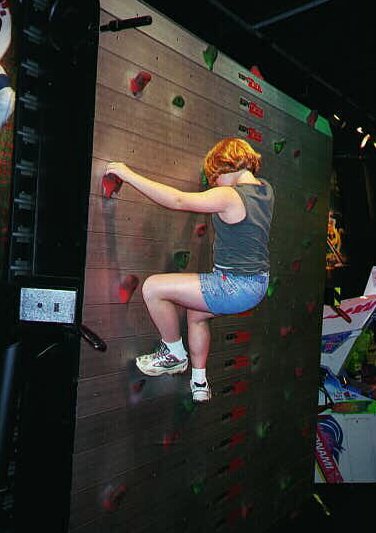 Kia on the back-tilting climbing wall.

After that, we went right next door for lunch at the Hard Rock Café. 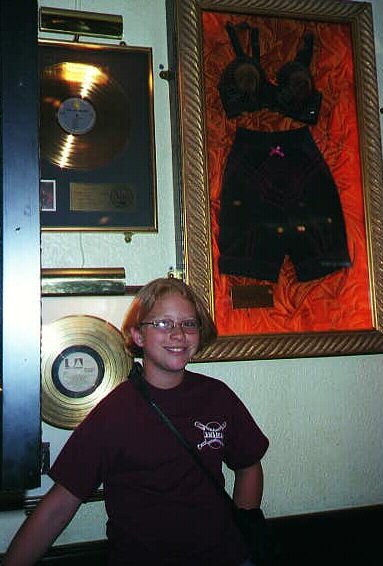 Kia, posing with some gold records and Madonna’s bustier.

We also toured the National Aquarium, but she wasn't terribly impressed until we got to the dolphin show. 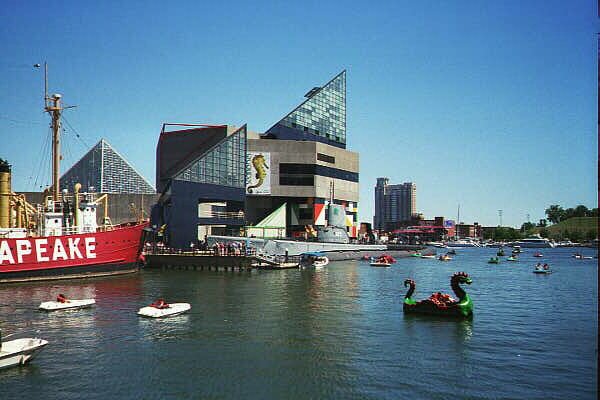 The National Aquarium at Baltimore.  The Hard Rock and ESPN Zone are just behind the boat on the left.

She also wanted to go out on one of those dragon boats you see in the picture.  Now I’m a pretty soft touch but there was no way I was agreeing to that.  I guarantee that she’d pedal for 3 minutes and then I’d have to spend the next half hour trying to maneuver that big tub around the Harbor myself.  No freakin’ way.

Later in the trip, we came back downtown to see the Orioles play the Phillies.  I got a pair of seats in the 4th row behind the left field wall. 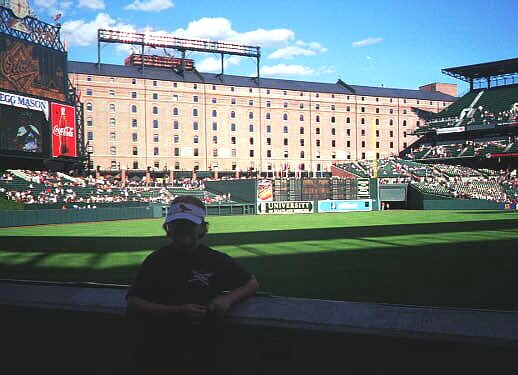 I apologize for the crappy camera I had in 2001.

Kia had her own money for treats and souvenirs, so I wasn't worried when she said she wanted an Orioles hat.  I tried to guide her to the inexpensive $5.00 hats the vendors sold outside the ballpark.  Naturally, she only had eyes for the $12 visor, which is all you can really see of her in that picture.  Girls…

For the 4th of July, we spent the day with my brother’s family.  First, we went to their pool, where my 2-year old nephew Daniel charmed the pants off of Kia.  I mean, who can resist this face? 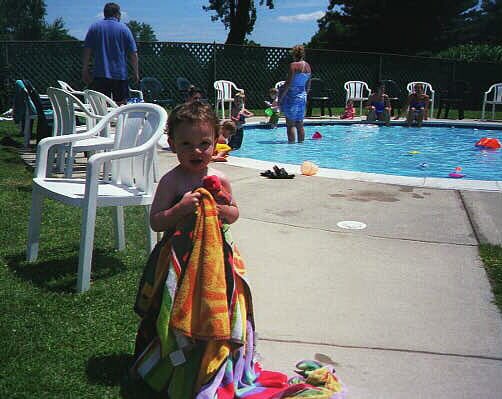 “As Mayor of Toweltown, I must hold All the Towels!”

She mother-henned him throughout our time at the pool, before we went to the 4th of July parade.

In my brother’s town of Catonsville, they have Really Big Deal Parade every 4th.  They usually draw the Governor and a number of state and local politicians, but it’s fun to go anyway.  People start putting their lawn chairs out along the route up to a week in advance.  It’s really crazy.

We walked there from my brother’s house and somehow found a spot to roost.  The problem with a 4th of July parade is that it’s in July, and it’s usually roasting hot.  That year was no exception, so we spent a goodly amount of time trying to find cold drinks.

My favorite part of Kia’s visit came when the parade was over and we were walking back.  The narrow suburban streets were crowded, because the sidewalks were spotty and not conducive to a lot of pedestrians.  Cars were trying to navigate roads crowded with walkers, so it was slow going.

My sister-in-law, Sue, was pulling Daniel in a wagon and this lady in a station wagon was trying to get by.  I don’t remember if she honked or not, but she made it obvious that she was annoyed by having to share the road with a weary mother and child.

Sue edged as close to the curb as she could to provide the lady more room to get by, and that’s when I noticed Kia.  She had her arms crossed and in one of her hands was a can of silly string she bought at the parade.  As the car passed her, she shot out a line of Silly String that stuck to the car as it passed.  It was a very subtle move… I don’t think anyone else even noticed.  I was so proud!  It was the perfect response.

To round out the week’s activities, we had a day at the local ice rink, (which was nice and cool after the heat of the ballgame and parade), and we went bowling. 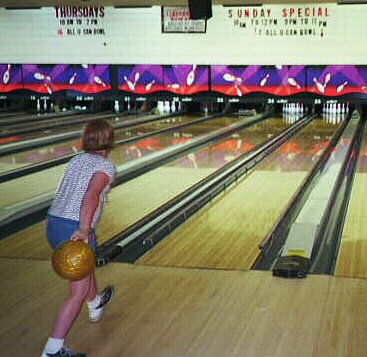 She wanted a lane with bumpers in the gutters, but as far as I’m concerned, anyone that can scale a backward-leaning rock wall can bowl without bumpers.

In and around all the events I’d planned, we would stay home and watch movies.  I didn't yet have the collection I sport today, but it was still pretty substantial, and chocked full of kid-friendly fare.  I remember watching Jaws, (all the shark parts, without all the talking) and I introduced her to Ferris Bueller.  She liked that one so much, she made us watch it again the next day.

Finally, when her visit was at an end, I took her back to the airport, where her flight was promptly delayed.  We were both pretty tired from the week’s activities, but we were forced to sit there for a couple of hours before she could board.  After 5 days, we’d pretty much talked about anything we had to talk about, so for the most part, we sat in silence.

I do remember asking her what her favorite part of the trip was.  She said, “Staying home and watching the movies.”

It was then I realized that I might have over-thought her entire trip.  Shit, I could have just rented a buttload of movies and saved myself about $200.  Kids…

Kia’s sister Kyrie was 6 that year, and was terribly jealous that she didn't get to come out and visit me too.  The plan was that when she turned 10, she’d get a trip too.  But we all know what happened September of 2001.  They wouldn't be taking any more trips for quite a while.

I see Kia all grown up now, still strong-willed and independent, and the mother of 2 beautiful children.  I know she still makes her Pappy crazy sometimes, but I also see his eyes dance when he plays with his grandchildren.

Next time I visit, I think I’ll hook up the little one with some Silly String.
Posted by bluzdude at 1:23 PM