The heck with the Physcyl Clyff deal, the biggest news in Baltimore this week is that Ravens’ linebacker Ray Lewis is retiring.  As if this weekend’s playoff game against the Colts wasn't enough, this town is going absolutely apeshit in anticipation of Ray-Ray’s last dance.

If you've been here before, you know the antipathy I have towards the Ratbirds and their purple-swathed fans.  So let me say this right off: I acknowledge that Lewis is a premier linebacker, an all-time great, and will have a rightful place in the Hall of Fame.  And I can’t stand him… or more accurately, I can’t stand how the locals willfully avert their gaze from his felonious past to provide an unlimited supply of helium for his zeppelin-sized ego.

Director’s DVD Commentary: How funny would it sound if everyone in the stadium took a snort of helium before cheering?  It would be like a football game in Oz.

Seriously, could this guy possibly be any more full of himself?  Is there anyone else in the league that makes such a spectacle of himself just by coming out onto the field during introductions? 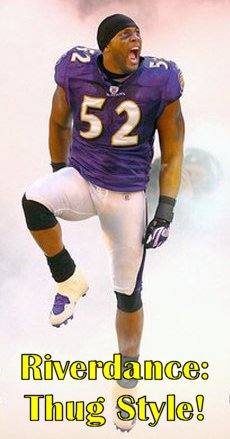 If I was a Rattie fan, I’d be embarrassed, but they all talk about how they’ll miss his pre-game “dance.” 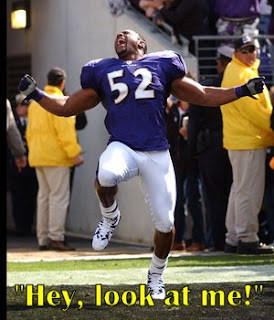 Now I’ll admit that I used to kind of like it a few years back, when the Steelers’ Joey Porter would tuck his jersey up under the bottom of his shoulder pads before during warm-ups and stalk up and down the 50-yard line with his cheese-grater abs exposed.  He’d glower at the other team, talking smack and trying to get someone to take the bait.  That was badass.

But a pre-game dance?  Seriously?  A fucking dance?  There’s no dancing in football!  At least not without making a play or something first.  Then you might as well hop, skip and jump, and pound your chest because everyone else does it too.

But it’s not really even Ray that bugs me as much as it is the fans and their blinding hero worship.  It bugs me that they give their guy a free pass on a major violent crime, yet they continue to throw slurs about the rough time my guy had a few years back.  Yes, this comes down to a compare and contrast of Ray Lewis versus Ben Roethlisberger.

If you’re not familiar with the case histories, let me give you a quick summary.

Ray: Convicted of obstruction of justice (to a double murder)

At the 1999 Super Bowl in Atlanta, two hangers-on to Ray’s posse got into a dust-up with two “other guys.”  Next thing you know, the two “other guys” were stabbed to death.  The two-hangers on escaped with Ray’s posse into his limo and were whisked away.  Somewhere along the way, they disappeared the knife(s) and Ray’s bloodied white fur coat, neither of which have ever been found.

Ray could have been a stand-up guy and showed some character, but under police questioning he denied any involvement at all, while lying to the police to send the investigation in another direction.  Eventually, enough of the truth came out that Ray was charged with Obstruction of Justice, to which he pled guilty and served two months’ in prison.

He also testified against the two alleged killers, but with his credibility damaged, they were acquitted.   To date, the murders are technically “unsolved.”  But much like the OJ case, everyone knows what happened.

Ben: Convicted of nothing, charged with nothing (but general douche-baggery)

There were two events, really.  The first one is still pending.  Ben had sex with a hotel employee who came up in his Vegas hotel room.  According to her friends, she excitedly bragged about it the next day, but a year later, she claimed she was raped.  The civil suit (there were never any charges filed) has been kicked around and delayed over the last few years.  The smart play would be to settle just to make it go away, but Ben has refused so far, maintaining that the encounter was completely consensual.

The “big” event was the thing in Georgia, where Ben was out at a college bar and had some kind of sexual encounter with a student in the restroom.  The girl was really drunk, possibly on some of the shots Ben was buying for “all his bitches.” (His words.)

Whether the girl went in there willingly or not has never been proved.  In her initial statement to the police, she never reported any use of force… not until going back and talking with her sorority sisters.  Then, she and her girlfriends all told an identical new story to the police.  (I read the police reports, (and so can you), on theSmokingGun.com.)

The prosecutor, who was dying to nail Ben’s pelt up over his mantelpiece, was unable to secure enough credible evidence to press even a single charge.

The reactions to both events were wildly different.  The people in Baltimore refused to believe a single word about Ray’s involvement.  Even after he pled out, they were convinced it was a frame job by the prosecutor, the police, and probably the referees too.  Outside the Beltway he was a pariah, in fact after being named the MVP of Super Bowl XXXV, he was refused the iconic “I’m going Disneyworld” ad.  His name was toxic, but at home he remained the conquering hero.

After Ben’s ordeal in Georgia, I saw a poll in the Pittsburgh Post Gazette that showed over 40% of the respondents wanted him cut from the team!  (The rest of the responses were divided between trading and suspending him.)  People burned their #7 game jerseys.  Steeler fans were seriously PISSED over him sullying the (team owner) Rooney’s and team’s name.

I was one of them.  I had a Big Ben t-shirt that I was thiiiiis close to tossing out.  I’d heard tales of his rampant douche-baggery around Pittsburgh, like acting like a spoiled, entitled brat while out in public, and brushing off any fans but the young chickies, so he was never a personal favorite of mine.  But franchise QBs don’t come easily so I didn't think cutting him was the answer, especially with nothing actually proven.  It’s not illegal to be an asshole.  I wanted to see what he was going to do with the rest of his career because he sure dug himself an awfully big hole.

It took some major steps on Ben’s part to even start to win back the fans, especially the female fans.  (Pittsburgh has the highest percentage of female fans in the NFL, as gauged by merch sales.  Fact.  My Pittsburgh blog sisters will have to chime in to let me know if they've forgiven him or if they ever can.)

Personally, I’ll hand it to him that he got his ass out of the bars, (especially college bars), got married, settled down and recently became a father.  He also became a better leader and teammate in the locker room and more cooperative with the media.

After a big loss, he always steps up and accepts the blame, whether it’s really his or not.  He never shirks his responsibility as a team leader.  Ray, on the other hand, disappears immediately after a big loss, especially if it’s on account of the defense.  Just too brooding and tortured to step up to the mic, right?  Or if he does comment, it’s usually to blame the refs, the schedule or the league.  One time, he actually blamed the Steelers for picking on their rookie cornerbacks.  (As if that’s not exactly what every QB in the league has done since the dawn of time...)

So on to my real point…  Ratbird fans here can’t get enough of slamming Big Ben.  I know he plays for the rival team so I expect abuse, but keep the focus on the field, huh?  Every time it’s Steelers/Ravens Week, it’s “Rapistberger” this and “pervert” that… They totally look past their guy, whose shady past left a couple of guys, who last time I checked, are still fuckin’ dead, to throw stones at another guy, who was never charged with anything but acting like a dick.

Not here.  So from now until the end of the season, it will be All Ray, All the Time.  People will campaign for naming him the greatest inside linebacker ever and tell and retell stories of his exploits.  If he’s not named to the Hall of Fame in a unanimous vote, they’ll claim league bias.

Ben Roethlisberger is the criminal here in Baltimore, as Ray Lewis goes dancing into a luxurious retirement.  Good riddance.

Meanwhile, two families still grieve over dead sons, whose murderers were never brought to justice.
Posted by bluzdude at 6:42 PM