I usually use this post-Christmas downtime to lay low for a couple months and restock my bank account.  This year is not cooperating with me in that regard.

Last week, the Pittsburgh Penguins put their single-game tickets on sale to the general public.  Starting at 10:00 AM on Tuesday, you could go to their website and try to outfox thousands of other Yinzers in an online Battle Royale.

I haven’t been to their new arena yet… well, not inside, anyway… so I’ve wanted badly to see a game there.  Also, not only has Pinky never attended a hockey game, she’s never been to downtown Pittsburgh, so I’ve been looking for an opportunity to remedy that.

In past years, I’ve told myself, “I’ll just wait until spring, when it’s nice, and I’ll look around the ‘secondary’ markets for some tickets.”  The problem is that I never follow through when the time comes because ‘couch inertia’ has taken over.  I haven’t been to a Pens game since 2009, so this has been going on a while now.

So this time, once I took a look at what tickets were going for on StubHub, I let the prospect of grabbing some seats at face value spur a move to action.  The question was which game to go and see?

I wanted something late in the season, so it wouldn’t be too cold to walk around dahntahn.  As luck would have it the Pens are playing the Buffalo Sabres on April 20, which is a Saturday.  And to sweeten the pot, the Pirates are also in town that weekend, playing the Braves.  That meant I could pull off a doubleheader… one trip, two games.

Next, all I had to do was get lucky enough to score some tickets.  Come 10:00 on Tuesday, I was ready to pounce.  The Pens tickets I landed were better than I expected; we’re in the lower bowl, 3rd row, in the corner where the Penguins shoot twice.

Then, I booked a room at the Doubletree, right across from the ice arena.  (I stayed there this past summer when I was in town for the Darwinfish Fry III.)  I wanted to book it early, before the game-day price gouging could take effect in earnest.

I saved the Pirates tickets for last because I figured they wouldn’t be too tough to get, and I was right.  I got some nice, lower bowl seats just to the 3rd base side of home plate.  I’m looking forward to showing Pinky the best ballpark view in the major leagues. 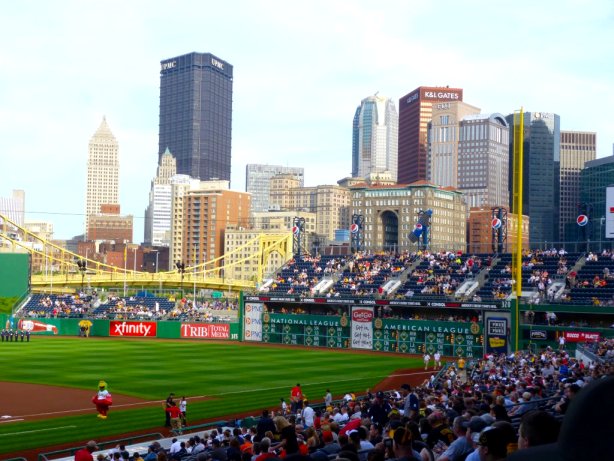 So our trip will shape up thusly: Roll into the Burgh on Saturday afternoon, wander around town for a while and see the sights.  Check into the Doubletree.  Maybe meet up with some of my blog friends for dinner, to prove that Pinky is a real person and I’m not the blogging version of Manti Te’o.  Then we skip over to the Consol Energy Center for the game at 7:00.  Sunday, we find some breakfast in town, and hit PNC Park for the game at 1:30.  I haven’t nailed down the aftermath yet.  We can either come home, or maybe run out to the west side to see my family, then come home Monday.  All told, I dropped about $640 on the trip (so far), but I think I’m getting some bang for my buck.

Now, to make matters worse, the Orioles put their single game tickets on sale the very next day.  It hasn’t been hard to get O’s tickets, but with their newfound popularity, you never know.  So while one part of me said to hold off and pick up seats as I need them, the other part knew that I was going to spend the money either way, so why not get the best seats I could?  Guess which side won.

So there I was again on Wednesday, finger on the button, waiting for the stroke of 10:00.  This time, I was working with Sitcom Kelly, my frequent baseball-watching partner.  We already had some games circled on the schedule… mostly inter-league games.  The NL West is coming to town this year, so I wanted to see the Padres and Rockies, the latter of which, I’ve never seen.  Sitcom Kelly used to live in Colorado, so she wanted to see them as well.

Note: Believe it or not, I've never seen the Braves either, so with these two teams knocked off my spreadsheet, the only remaining team I've never seen in person will be the Arizona Diamondbacks.  And I would have seen them by now as well, but when I was visiting Tempe in 2002, I screwed up the game time and arrived at the park during the 8th inning.  Stupid Pacific Time…

Anyway, I got pair of outfield club seats for the Padres and Sitcom Kelly got the exact same seats for the Rockies.  We’ll take each other to the Rockies and Padres games, and I also picked up a pair in the lower bowl for a game against the Twins, in the first home series.  All told, the Orioles cost me another $177, which brings the grand ticket and hotel total to $816.

It’s not the best budgeting I’ve ever done, but I’ll thank me later.  Having the tickets in hand will force me to get off my ass and go.  I just hope nothing unforeseen comes up that keeps me from attending any of the games.  I’d hate to add to my collection of unused tickets. (Three playoff games the Orioles never got to play last year, and a cancelled Van Halen concert.)

So it looks like it’s shaping up into a fun spring and summer.  We’ll probably fold a trip to see the parents sometime in May, as well.  Maybe this time we can score some tickets to actually see the Pensacola Blue Wahoos play, instead of just wandering around their ballpark.
Posted by bluzdude at 6:41 PM

I am going to tell you right now that I read this post, panicked, and immediately called the Orioles. Let me explain . . .

For our anniversary, I got the hubs season tix to this year's games. However, in October, they didn't have the tix yet. So it was more of a promise of future tickets. I talked to a very nice man in the ticket office who took all of my info, and assured me he would call in Nov/Dec when the tix were available. December rolled around and no call. So I called him (cuz mama didn't raise no dummy and I got HIS info as well). He reassured me that they were late this year and the tix would be out in January. Of course, January has come and almost gone and I completely forgot . . . until I read your blog post about SINGLE tix going onsale. Yikes! So I called, and rest assured they still had plenty of tix (that they apparently hold back for season tix holders). So I ordered a 13 game plan that I will be splitting with my BIL. Yay!

Anyway, I'm sure there will be a time when I have extra tickets. I will let you know.

Sounds like you have a good start to the sports season with your ticket purchases. And a return to us being able to root for the same team. Go O's!! ;)

Glad I could help.

Ever since I ordered those playoff tickets online, I've been getting emails from the O's. so I got one announcing the single ticket "pre-sale", before they were to go on sale to the general public after Fan Fest. So I basically just lucked into them.

See you at The Yard!

I'm feeling ya. Tickets and car repairs just sapped 2 grand out of my bank account faster than you can say "Tippy Martinez."

Sounds like fun to me! I had a blast at the Pirates game when Cass took me. The view was outstanding.

And guess what one of the four pro baseball teams I've seen is? That's right, the Diamondback in Tempe! :)

"Maybe meet up with some of my blog friends for dinner, to prove that Pinky is a real person and I’m not the blogging version of Manti Te’o."

The baseball is bad enough, but the delayed hockey season put the ticket sales right after Christmas. Gah!

My case was so stupid, because we were just killing time before going to the game. I went on to the MLB website and they said game time was 4:00. I didn't realize they were listing Eastern Time, so the game was really at 1:00. Man, was I pissed...

Las Velas! (per our off-site emails.) We need to stay in close proximity to the rink.

I've got the tickee if you come do my laundry...