I know I just devoted a whole post to a kid I knew, (‘past tense’ only because she’s no longer a kid), but you’ll have to bear with me on this one. I don’t have kids of my own, so I have to live vicariously through the children of others. But if I did have a kid, I’d want him to be just like my brother Ed’s boy Daniel, who turns 14 today.

I can hardly believe it. If you’re a parent, I’m sure you know what I mean. One minute your baby’s taking his first steps, the next thing you know, he wants the keys to your car. It’s like that with Daniel. It seems like his trip home from the hospital, his christening and his first steps were all just last week.

I thought it was clear, right off the bat, that the boy looked exactly like his father. Here, you can judge for yourself. 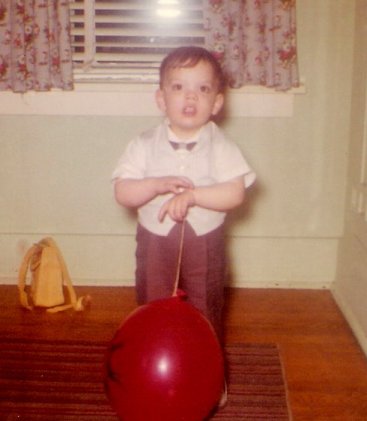 This is my brother. 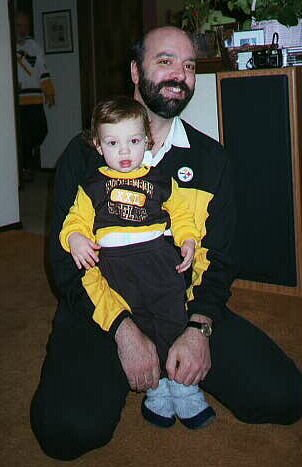 This is me with Daniel, at about the same age.  Could be the same kid, but for the styling clothes the boy is wearing here.

Luckily for Daniel, he got his uncle’s temperament. He was the most ‘chill’ baby ever. I think that’s common with the first-born. It tricks the parents into having more. After that, all bets are off.

Daniel was born whip-smart, I think. He knew me before he could even say my name. His parents drilled him on all his family members by using photo albums. In fact, that was one of his favorite things to do. I’d come over and he’d pull out a huge photo album, trundle it over to me, hop up on my lap and say, “Read pictures!”

I was there for his first steps. He had been pretty good with maneuvering around while holding onto a couch or table, but had never flown solo. Then one night, I was visiting during the March Madness tournament and during halftime, my brother and I got down on the floor with him. Ed was holding him and I beckoned him over to me. Next thing you know, he went bip-bip-bip-bip and crossed right over to me. I think it surprised all three of us. 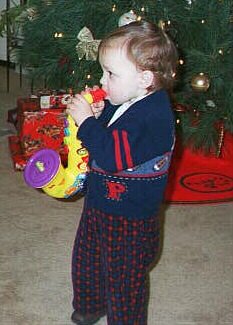 Already, he knew how to wail on sax.

I don’t remember Daniel spending much time with “kid movies.” In fact, I think he was only 3 when he started watching Batman… I don’t mean the TV show or cartoon… he’d watch the movie with Michael Keaton and Jack Nic, and sit still for the entire thing. I think the superhero movies WERE his “kid movies.” They certainly made Christmas presents easy to buy.

I remember when he got his toy “Batman-bile.” That’s what he called it, anyway. I said to him, “I think that’s called the ‘Batmobile.” He pondered that for a moment, shook his head and said, “No, it’s the Batman-beel.” I let him have that one, because it actually made pretty good kid-sense.

From Batman and Spiderman, he found the Star Wars series. Oh, was he ever into that… One time, when he was about 5, my mom made the mistake of asking him, “So Daniel, what’s Star Wars all about?” Daniel took a breath and then talked for a half-hour straight without coming up for air. It was really kind of an amazing retell, because after all, this is a 6-movie story arc that starts in the middle and then goes back to the beginning and loops back around. Of course, most of it had to do with spacecraft battles, ugly creatures and stuff blowing up. It’s funny how kids determine what’s important about a movie.

Jurassic Park was another favorite, because he was quite the Dinosaur Boy. Sure, he might not have been allowed to watch the part where the lawyer gets eaten, but he hung in for the rest. I tell you, that kid knew the name of every dinosaur that ever walked, flew or swam. I remember one day, when he was about 5, he was showing me some dinosaurs from his massive dinosaur book. I said, “You handle those 5-syllable words really well.” He looked at me and very earnestly said, “Well, I’m a paleontologist, you know.”

Another big interest was anything that had to do with knights and kings. He loved the King Arthur legend and learned all about medieval times and the Crusades and whatnot. One time when they were out visiting my parents, I buzzed my mom and told her that she ought to whip Monty Python’s Holy Grail on the boy. Did THAT ever go over big… Kings, knights, plus rampant silliness? Total win. Mom and her grandson would then stage elaborate sword fights… “Have at you!” 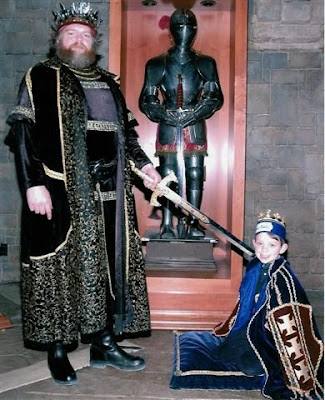 Once I knew he liked ‘silly,’ I recommended they show him Young Frankenstein. That was his favorite movie for a while, on the basis of a single line of dialog: “My grandfather’s work was DOODOO.”

Bathroom humor… boys are genetically programmed to find it funny, especially in OUR family. Hell, his father specialized in it.

One time, after he’d been recently potty trained, he was up on the hopper and my brother leaned in and asked if he needed help. Daniel nodded up and said, “Hit the fan.”

Another time, it was the converse situation. My brother was on the can one morning when Daniel woke up, and he called out, “Good morning! How’s my big son, Daniel?” To which Daniel answered, “Fine. How’s my pooping Daddy?”

Calling out anyone that farted was another favorite pastime when he was little. My mom says that at least once per visit, he’d announce, “Peepaw tooted…” He nailed my brother like that once, on a plane. They’d just landed and everyone was standing up, waiting in silence for the doors to open. Suddenly it became clear that someone in the area dropped a bad one. Then, in a stealthy but clearly audible tone, Daniel spoke up, “Daddy tooted.”

Daddy actually hadn't tooted, but all eyes were on him anyway. Ed figured that someone on that flight owed him one, for taking the heat.

Daniel must have grown to become an expert on the subject. He showed me the first time I had to babysit him and his baby brother Sam. (I wrote about that experience here, regarding the trauma involved in changing my first diaper.) Daniel told me, “Uncle Bluz, Sam pooped.” I said, “Are you sure he just didn't fart?” He said, “No, his farts don’t smell like that.” I guess a brother knows these things.

This is one of my favorite stories. The family was on a beach vacation, I don’t recall where. The beach itself was huge, so to get down to the water, they had to cross about a 100 yards of burning sand. After making the trek down there, Daniel announced that he had to pee.

Having just recently been potty trained, Ed didn't want him to just go in his trunks and possibly undo all the recent success. But he also didn't want to go across all that burning sand to go back to their room. So he told Daniel, “Just go in the ocean.”

Daniel said, “You really want me to do that?” His daddy confirmed, “Yeah, just go in the water.” So Daniel went in the water, and by that, I mean that he ran down to the surf line, dropped his trunks, arched his back and let loose a stream into the waves.

I bet they don’t cover THAT in lifeguard training.

Not only is the boy smart, he’s always been quick with a retort. He was probably 3 or so, when he took to licking people. We were all together at my sister’s place one summer, and he licked her on the knee.

Bluz Sister very patiently told him, “Some people don’t like it when you lick them.” Daniel quickly replied in the sweetest tone, “But some people DO!”

When he was 11, I was over and his dad and I needed to run to the carry-out for 10 minutes. As we left, I told him, “OK, no wild parties now…” He looked up from his video game and replied, “No promises…”

He and his (maternal) grandmother differ on the whole video game thing. She was scolding him one Christmas, about how he should be playing video games that taught him math and stuff. He tried to explain the various geographic themes and battle strategies his game employed, but she wasn't having any of it. Finally he said, “Meemaw, I’m 10 years old, I’m a boy, and I like action!”

I know Daniel has already had some girlfriends, but he keeps the details pretty close to the vest. That’s OK with me; I figure he’ll let me know when anything gets serious. In the meantime, I have to smile over his first love, who was, alas, unattainable. But that’s what happens when you fall in love at a family reunion.

Daniel was about 2, I think, when he first met my cousin Angela. (I've written about her before; she’s the one that won on Fear Factor, met my brother and me in Miami for the famous Hurricane Jeanne game, and had her first baby the same week blog sister Cassie had her little Mae.

He spotted Angela and you could just see him get rocked. The next thing you know, he was bringing her little pieces of cheese, grinning up at her and then running away. Since then, every time we’d get together, he’d stick to her like glue. She was great about it too and always made time to play with him.

Daniel at 4, with Angela.

My dad would say, “Boy, you have great taste, but it’s just not going to work out.” 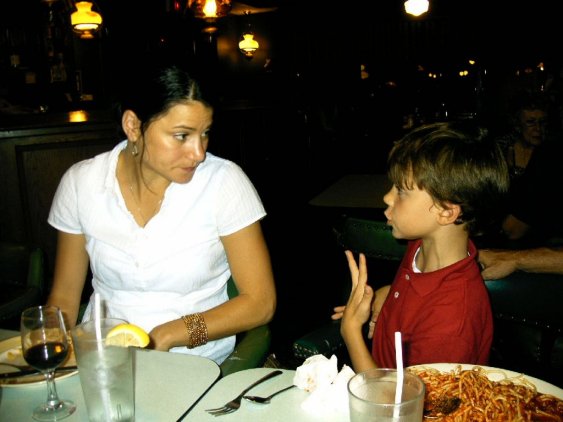 Daniel at 8, with Angela

When Angela got married, Daniel was the ring bearer. (That was neat to me because I was the ring bearer when her parents got married.) Anyway, I heard that on the trolley ride to the church, Daniel hip checked another boy in the wedding party, totally boxing him out for the right to sit beside the bride. 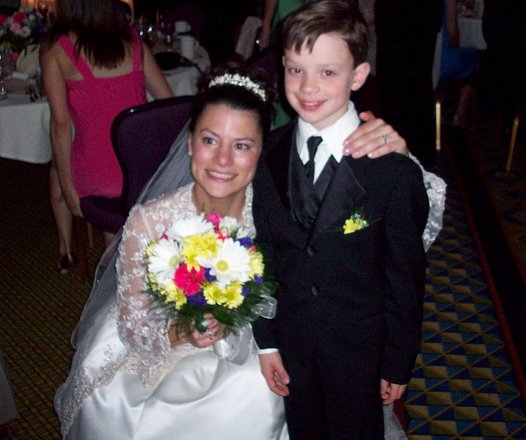 Daniel at 9, with The Bride.

I’m sure one day he’s going to be an amazing boyfriend or husband, because right now, he’s an amazing kid. He’s smart, funny, well-mannered, empathetic, a responsible big brother and has great taste in music. (AC/DC!) I give a lot of credit to his parents, because kids don’t just grow this way in a vacuum.

All I know is that he keeps me entertained whenever I visit and pretty much always has. The boy is going places… I just can’t wait to see what happens next.

More and more stories keep occurring to me as I write this, but I’m already running long, so these will have to do.

Happy birthday, Daniel-san. Maybe one day, we’ll get to see that Van Halen concert.
Posted by bluzdude at 7:35 PM